Posted on March 28, 2020 by highplainschasing

The Storm Prediction Center (SPC) has issued a Moderate Risk for northern Illinois. 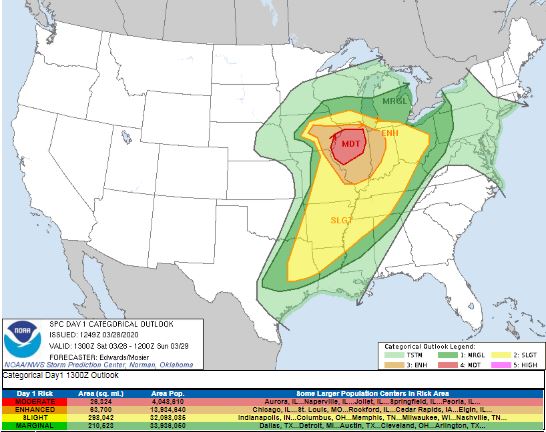 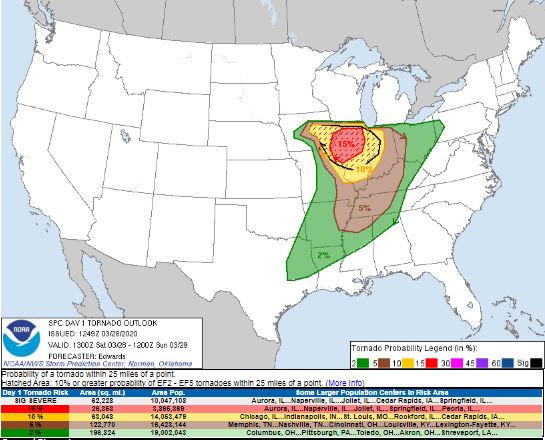 To summarize the SPC:  A mid- and upper-level trough and associated cold front will pass through the Great Plains and into the Upper Mississippi River Valley this afternoon and evening.  Ahead of it, there will be a moist warm sector, with a surface dryline coincident with the cold front.  The storms that form today will have ample low-level and deep-layer shear for supercellular formation, very large hail, and potentially long-track, damaging tornadoes.  Given the speed of the front, storms will be very fast-moving, with surface speeds of nearly 60 mph.

The 12 Z upper air soundings are unavailable at this time. 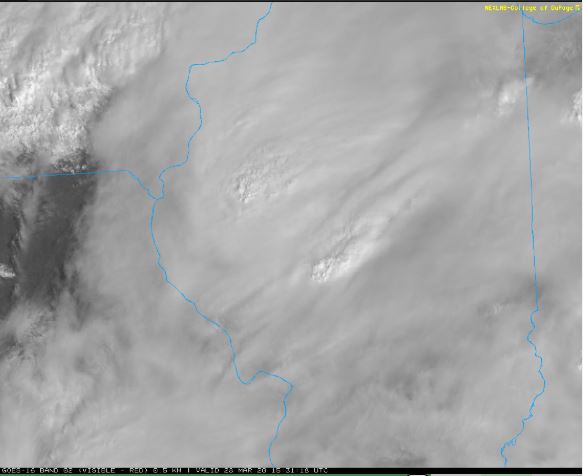 The surface observations steady southerly to southeasterly winds from the Gulf of Mexico.  The temperatures are mild and the dewpoints are high.  The whole region is under cloudy skies. 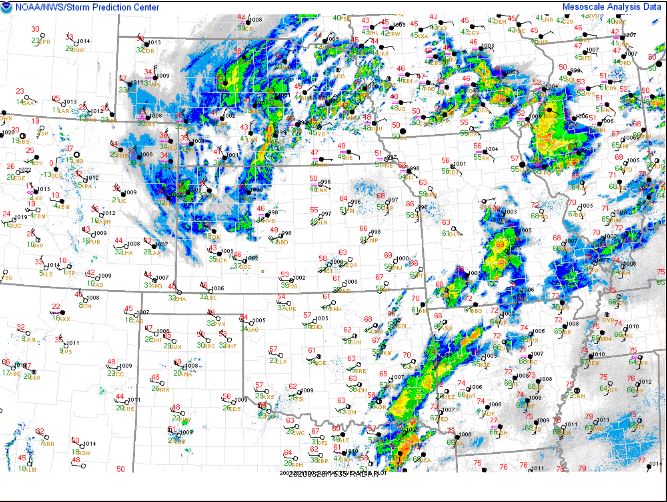 I annotated the surface observations chart.  The dotted blue line is the dryline (and likely the cold front).  It has an interesting bulge in Kansas.  There is also a warm front (marked in red) in Illinois that I believe is moving north.  You can see it with the temperatures and with the wind direction shift.  I also marked the position of the center of the low pressure system (marked with a black “L”), based on the wind direction, as it spirals around the low. 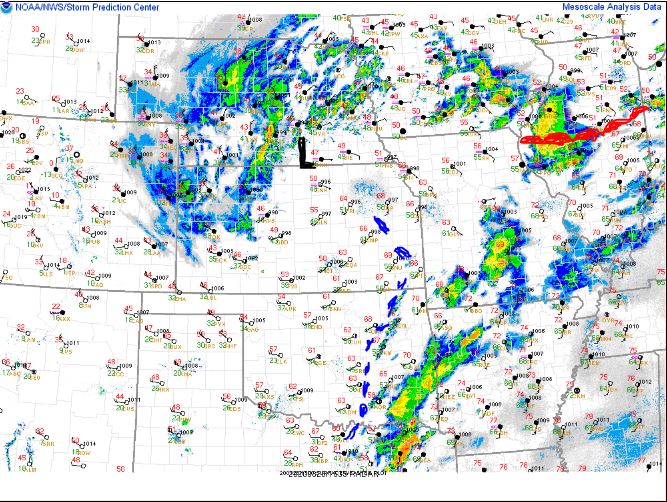 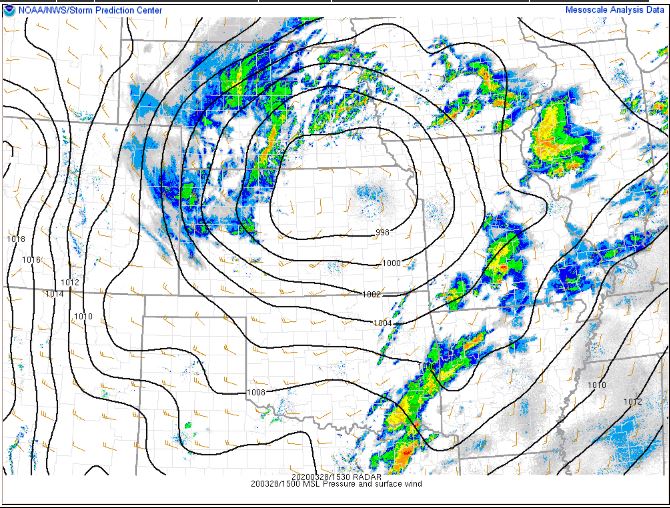 The HRRR simulated reflectivity is showing storms forming ahead of the cold front.  They will be quasi-linear, with embedded supercells and a few trying to remain discrete. 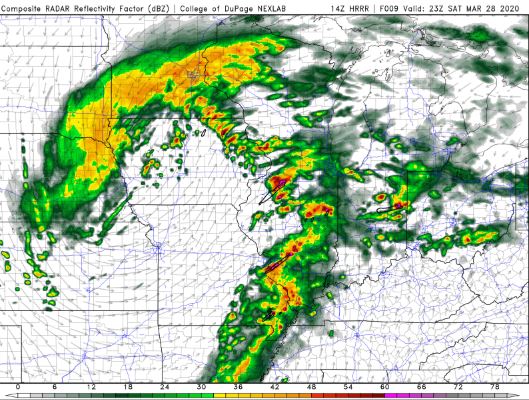 The HRRR is showing a dryline ahead of the trough.  Notice the dewpoints in the 60s F ahead of the dryline- a humid spring day. 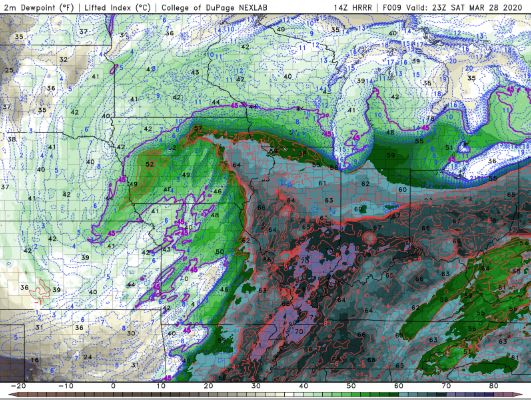 The HRRR CAPE/CINH plot is showing CAPE rising to 3500 J/kg in a few patches over central Illinois. 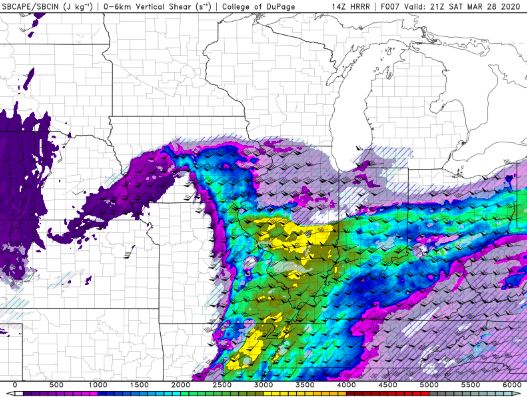 The HRRR shows that the supercell parameter will be high, particularly over northeastern Missouri and central Illinois. 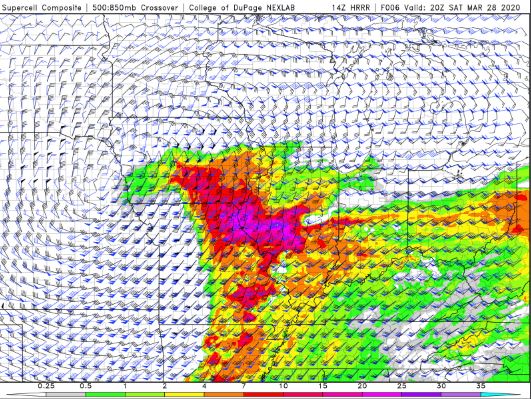 The HRRR also shows that the SigTor parameter is high, starting in northeastern Missouri, and then shifting east into central Illinois. 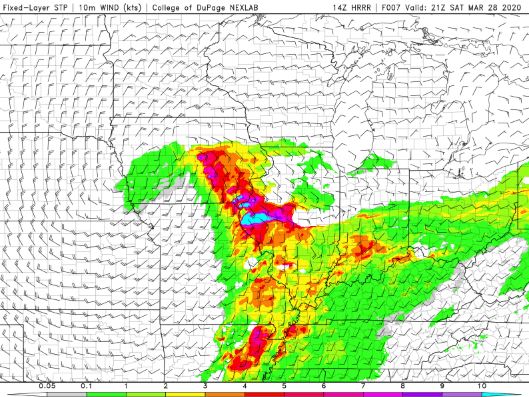 The HRRR shows a few strong helicity tracks cutting through Illinois by this evening. 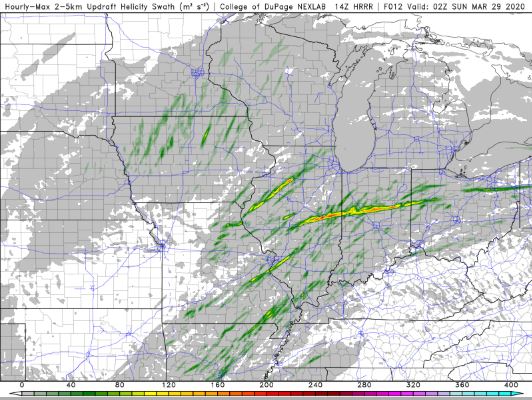 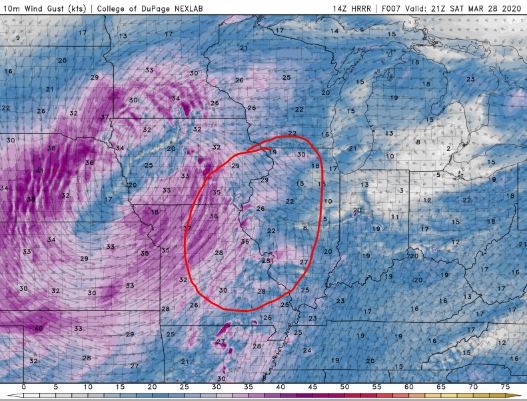 I think these storms may be more discrete than the HRRR is showing at this time.

If I were to chase, I would probably pick somewhere like Monroe City, MO, with a strong east-west option and a good Mississippi River crossing.  Storms will initiate in Missouri, and without a good crossing, most chasers will have to either pick a spot in Missouri and let them pass, or pick a spot in Illinois after the storms have formed and hope they are in the right place.

This would still be a very difficult chase.  I really don’t like setups with high speed storms, including the statement from the SPC today, “any tornadoes that do form may persist for nearly as many miles as minutes of time.”  This is an incredibly dangerous chase.

It is also going to be a test case for breaking the “stay at home” orders, as many chasers will be out in one of the strictest states for enforcing these orders.  Storm chasers are often not-well-liked in the Great Plains, and with the order in place, I’m sure we’ll hear of a few getting stopped or fined by tomorrow morning.

This blog is about my tales in storm chasing. My name is Seth Price and I am an instrumentation instructor at New Mexico Tech. My amateur radio call sign is N3MRA.
View all posts by highplainschasing →
This entry was posted in Practicing Concepts, Predictions, Satellite Imagery, Severe Weather and tagged #ilwx, #mowx, 15% hatched tornado ring, illinois, meteorology, missouri, moderate risk, severe weather, weather. Bookmark the permalink.