We started the day in Liberal, KS, after having very little sleep. We worked on building a dash cover and checked SPC and some of the soundings in our hotel. We targeted north of Dodge City somewhere, and began our drive. Here is a photo of the chase wagon for this year: 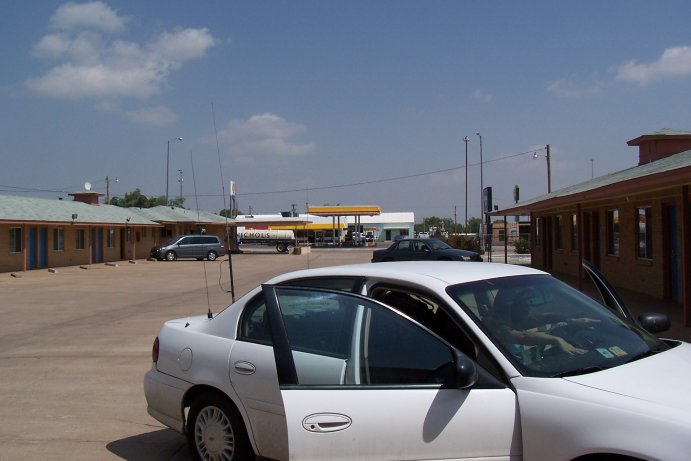 We drove up US-54 to Dodge City. We picked up lunch at Arby’s and Sonic and filled the tank in anticipation for an active chase day. After lunch, we headed up US-283 towards Jetmore. Storms began to build… 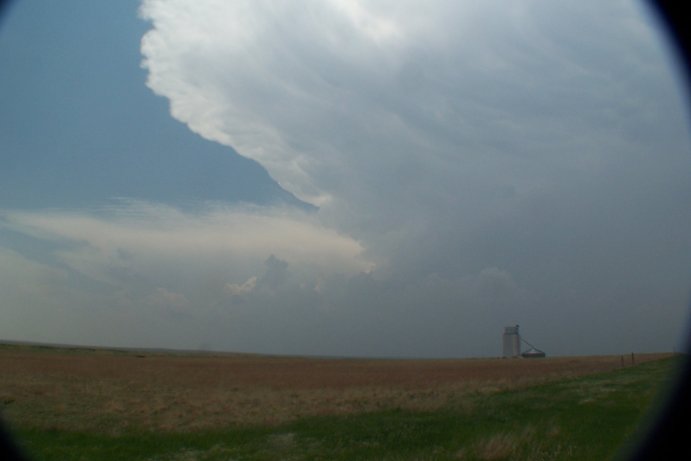 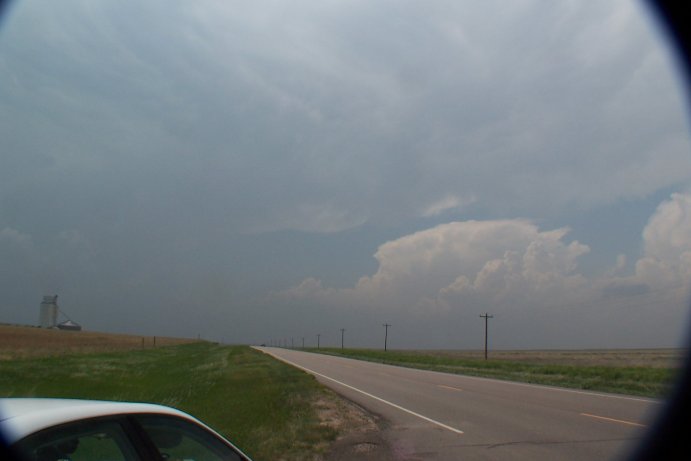 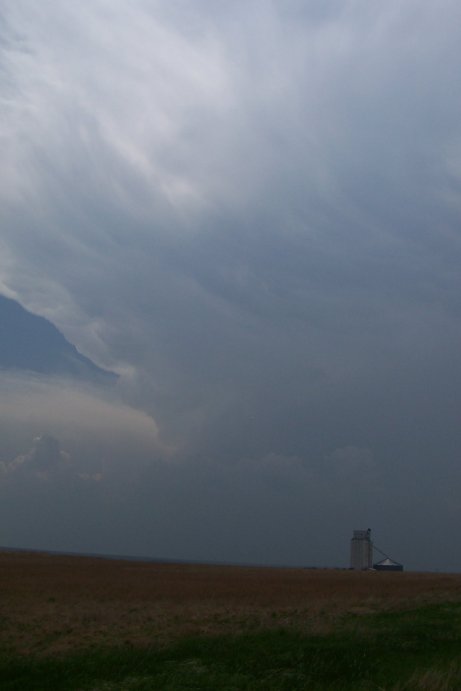 Here is where things get crazy. These storms are moving between 50 and 70 mph. Our road network allows us a turn every 20 miles. We tried to keep up, catch up, and stay out of the way, making many large circles between Dodge City, Jetmore, Dighton, Ness City, Kalvesta, etc. but were unable to catch a tornado. We did get a few shots of some mammatus… 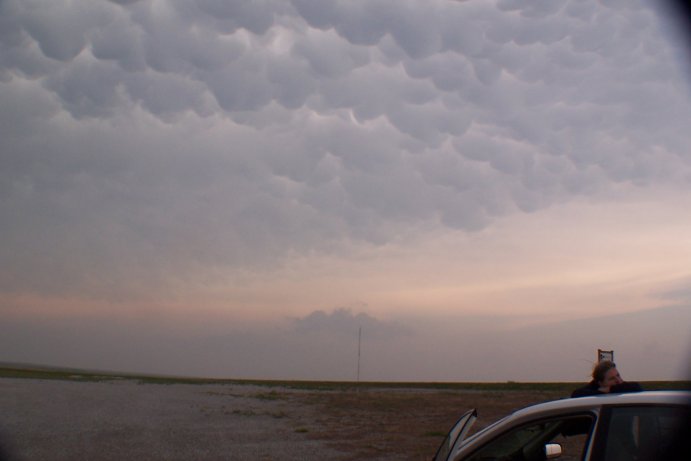 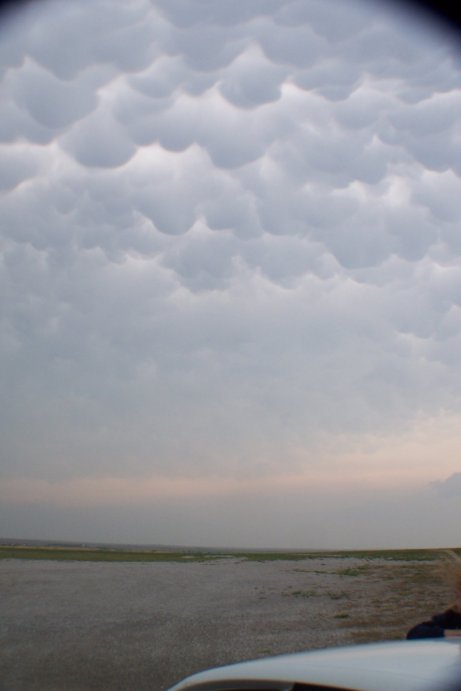 As this storm morphed into a raining, hailing mess, we cut through it to get west of it and find a place to stay for the night. We fueled up over an overhang to avoid some heavy rain on the east side of Scott City. After fueling up, we figured we could drive behind the line that was forming and be in the clear… though we left our cover a little early to do this, and ended up ducking into a carwash to avoid hail later on, just north of Scott City.

We ended up spending the night in Oakley, KS, near the I-70 interchange. Every other crew was somewhere far east of us getting hailed on and looking for a hotel out of the storm’s path. We had a relaxing dinner and early night.

We woke up to a breezy, dry, chilly day in Oakley, KS. We were way behind the dryline. SPC had a moderate risk for most of South Dakota, and we targeted Vermilion, about the only town we could get to reasonably. It is in the southeast corner of SD. We promptly left KS and headed this direction.

We drove up US-83 to US-34, stopping in Hastings. Here, we talked to Bobby to see where he was positioning. Bobby wasn’t going farther north than Grand Island. He had WXWorx and saw a ton of other chasers, so we were flying somewhat blind, only going on SPC’s morning synopsis. We headed northeast on US-30 and then north on US-81 towards the SD/NE border. After a while, we began to see some storms forming from the cumulus field we were driving through. 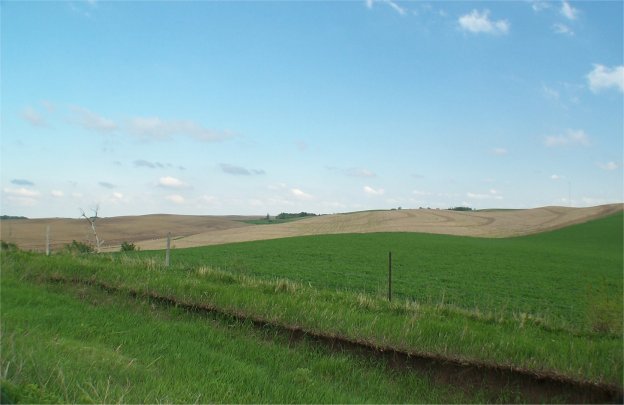 We grabbed a quick dinner at Wendy’s near Norfolk, and then continued up to Cedar County. Storms were beginning to fire and become severe warned. We fueled up and headed into Knox County, NE and had a brief intercept with a severe-warned cell. 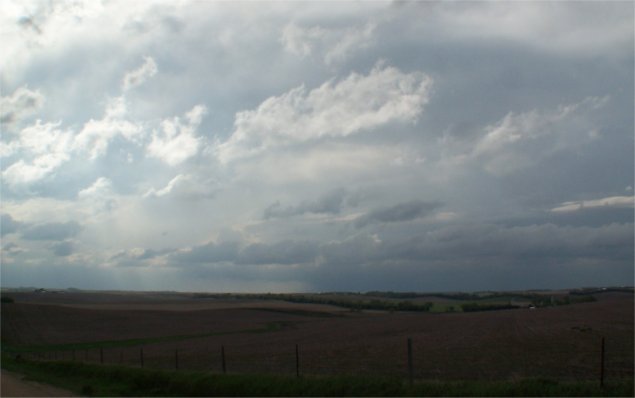 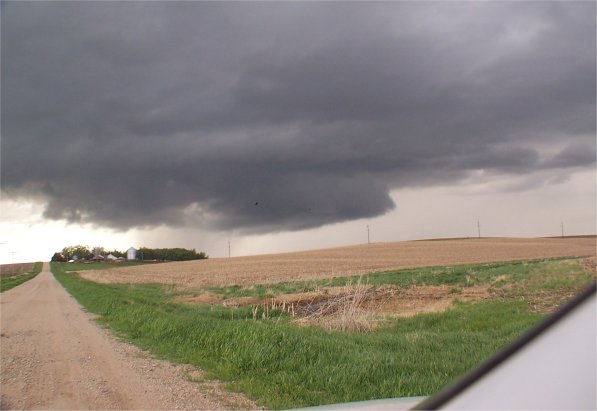 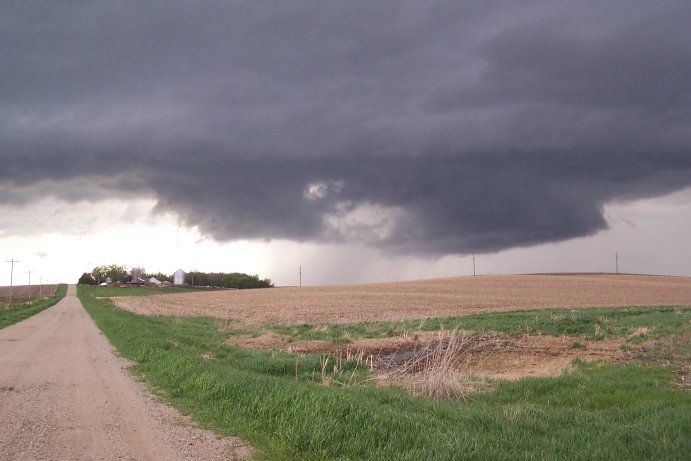 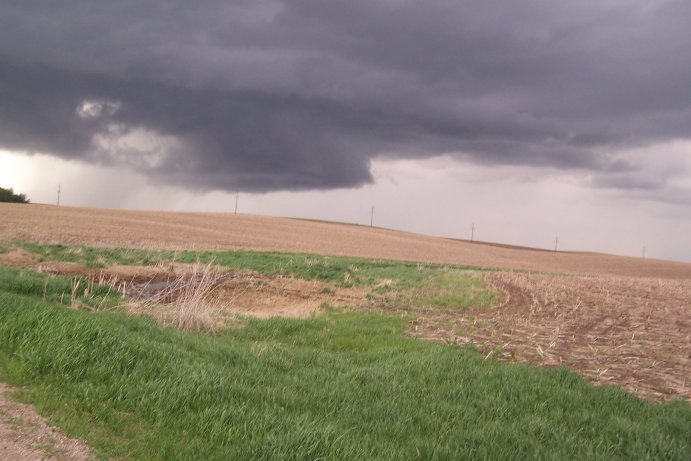 Even though this storm was warned, this storm was beginning to fizzle out. We opted to cross the Missouri River and get into SD, rather than get stuck on the bridge during the gusts and small hail as it gasped its last breath. Once we reached the SD side, we took some photos of the Meridian Bridge. This double-decker, single lane draw bridge was built in 1924, and is now being converted for use for pedestrian traffic. 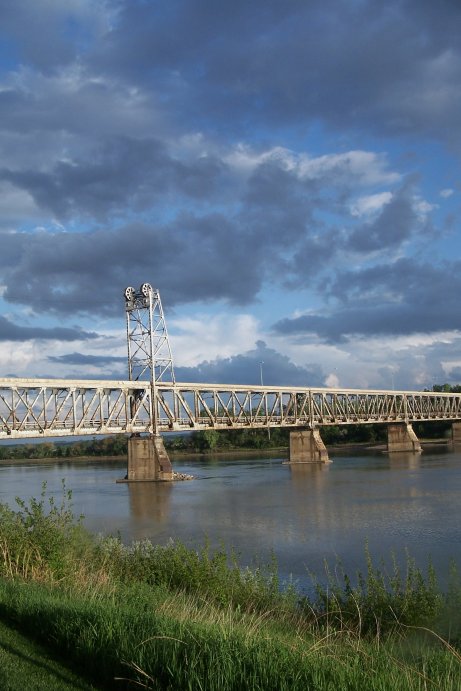 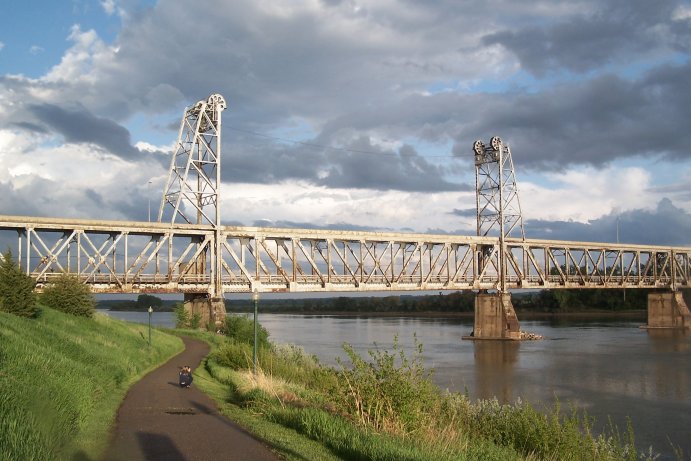 [Edit: I will post more photos of this eventually at Western Ghost Towns, my Industrial Archeology Blog, as they are more appropriately placed there.]

After the sun went down, we sought food and a hotel, and ended up spending the night in Vermilion, SD.

We started the day in Vermillion, SD and needed to get south. I worked a few stations from SD, drove through Iowa, and ended up crossing into Nebraska through Omaha. Around then, we realized the APRS tracking was not operational. It had been sporadic throughout the entire trip, so I figured it was time to stop in at a Radio Shack and get some necessary components for resetting/reprogramming the TinyTrak3. There was a Radio Shack in Lincoln that was open on Sunday, so we stopped there and repaired the TinyTrak3. It lasted another 15 minutes or so.

At this point, we’ve killed our chances of getting into central Kansas, so I begin to tinker with county hunting again. I picked up a few new counties, and WT0A informed us we were one county away from him. He also gave us a heads up about the weather that was approaching. As it turns out, there were several severe warned cells like two counties south of our current location. We looked around and could barely make out anything through the haze, but we ended up turning around and jetting southeast to get in front of the cells. I figured we’d catch up to WT0A at some point, but instead, we operated from like 6 of the 8 counties adjacent to his, and never got to thank him in person for his heads up!

We were previously headed west on I-80, just passing York, NE. We hung a U and then headed southeast through Crete, NE and then to Wilber. From here, we could see the precipitation core of one cell approaching. It was warned, but mostly on account of high winds, with gusts over 70 mph on the initial warning. 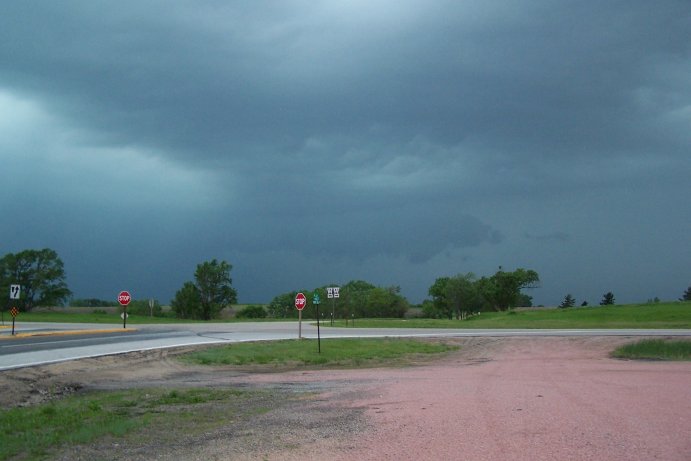 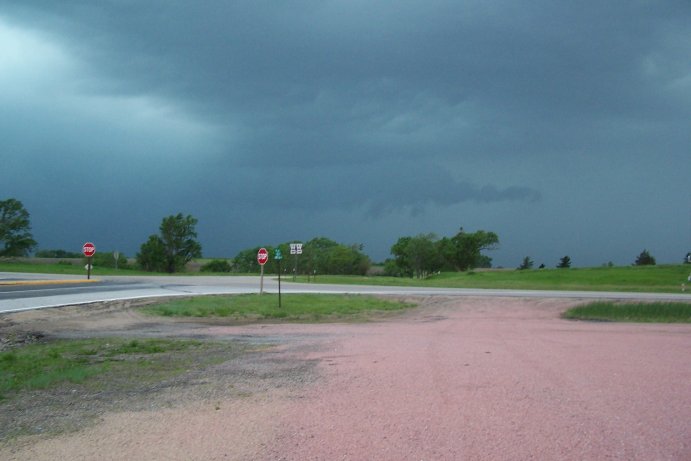 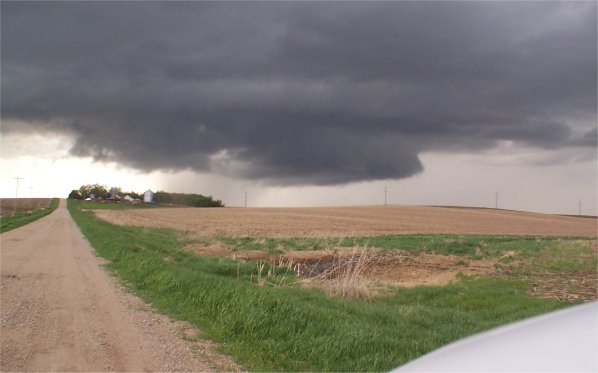 After speaking with a few concerned locals, we decided that we needed to get farther southeast. Instead, we got hit with some high winds, as we made our way down NE-103. Lots of blowing dust and some light precipitation slowed our travel a bit, but the storm gusted out. We called it a night in Beatrice, NE, having dinner at an Italian Buffet place that had really good bread.

Beatrice was overcast and cool first thing in the morning. SPC showed better chances for storms into southern KS, so we needed to get south in a hurry. We left, driving through Gage, Jefferson, and Thayer counties along US-136, and then turning south on US-81. Through KS, I picked up Republic, Cloud, Ottawa, Saline, McPherson, and Reno counties. In McPherson, we picked up some internet and confirmed that we needed to head south or southwest. We opted to go southwest, as we wanted to avoid Wichita if at all possible. We took KS-61 through Hutchinson to the town of Pratt, KS. Here, we met up with Bobby and a bunch of other storm chase crews.

Pratt was sunny with plenty of vertical development in the cumulus field to the south and west. Rather than producing discrete cells, a nasty line had formed almost immediately. Rather than take our chances, we both parked under a bank ATM overhang and awaited the oncoming hail.

Two vehicles parked under a bank overhang on Memorial Day. I guess that was suspicious, as several police officers showed up to insure that we were not breaking into the bank. We chatted with them for a few, showed them some radar images and told them what we thought was coming. They were very polite and professional, and were happy to see the current radar images. They bid us farewell and we turned our attention to the approaching line, which had weakened significantly.

Convinced that the hail threat had diminished, we headed south along US-281. At Sawyer, Bobby headed east along KS-42, and we continued south to Medicine Lodge, under a weakening line and sunny skies to the west. Busted day.

This was our last chase day. The threat area was close to the eastern TX/OK border. We left Medicine Lodge, after having a good breakfast at the diner next to our hotel. US-281 took us into Oklahoma, and we switched onto US-183 near Seiling. At Clinton, we picked up I-40 and headed west to Sayre. Bobby was already in Sayre, waiting at a truck stop and watching the cumulus field build. We grabbed a quick, but decent lunch at the truck stop.

As cells began to fire, we headed east along OK-152. I should mention our logic at this point: There was a dryline that was expected to move east from the TX/OK border, upper level dynamics all over the area, and a frontal boundary that was moving southeast from around Shamrock, TX to Woodward, OK. We wanted the place where the dryline and front intersected, and we traced a path based on what we thought the current motion of these boundaries would be.

Somewhere, Bobby went north and we headed south. He figured he’d stay out of some of the storms (that ended up being weak) that had formed to the south, and we tried to trace where the intersection would be. Instead, we both busted today. The frontal boundary never moved, it became stationary, as did the dryline. No intersection, no strong storms.

We began the long trek back to Tucumcari, where we spent the night, en route to CA for a conference.