Posted on April 19, 2020 by highplainschasing

The Storm Prediction Center (SPC) has issued a Moderate Risk for Dixie Alley. 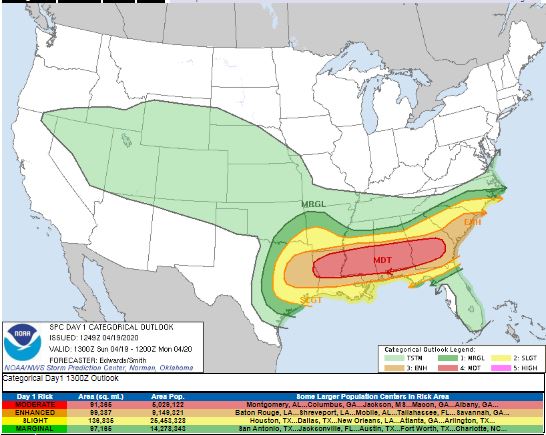 Associated with the Moderate Risk is a hatched 15% tornado threat, labeled SIG SEVERE. 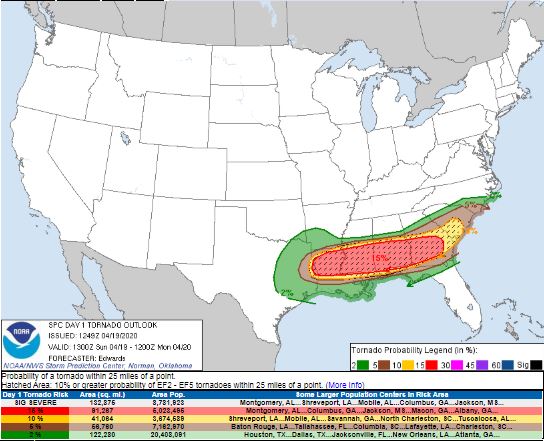 To summarize the SPC:  The warm sector ahead of a shortwave trough will be the focus of activity today.  The warm front is expected to lift from southern Georgia, yielding dewpoints in the lower 70s F and plenty of instability (with CAPE values approaching 3000 J/kg).  The two storm modes will be:  supercells early on, followed by a messy line of training storms that may have embedded supercells.  The dominant threats will be large hail and damaging tornadoes.

The 12 Z upper air sounding from New Orleans, LA, shows some fat Convective Available Potential Energy (CAPE) of 2252 J/kg, and a supercell parameter of 19.8.  There is more than enough low-level (27 kts) and deep-layer shear (43 kts).  With this air mass moving to the northeast, things could be intense for Mississippi today. 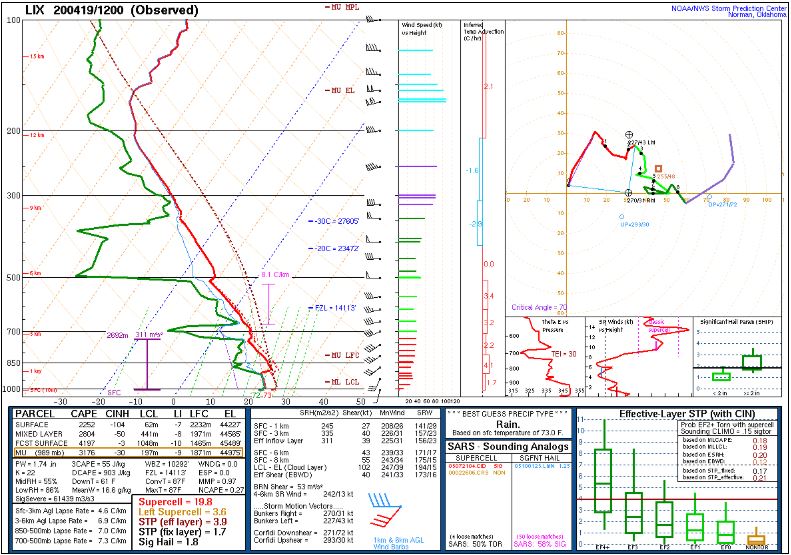 The visible satellite imagery shows cloudy skies over the threat area, but the warm front is visible.  Behind the front, skies are clearing, allowing for enhanced diurnal heating. 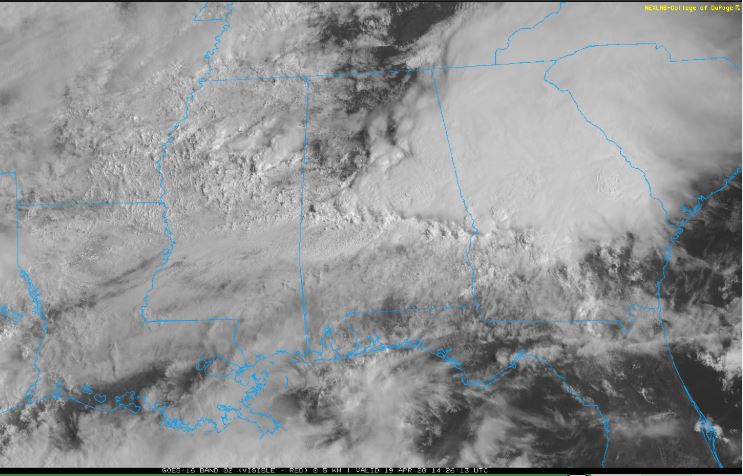 I modified the image; the red line is the warm front. 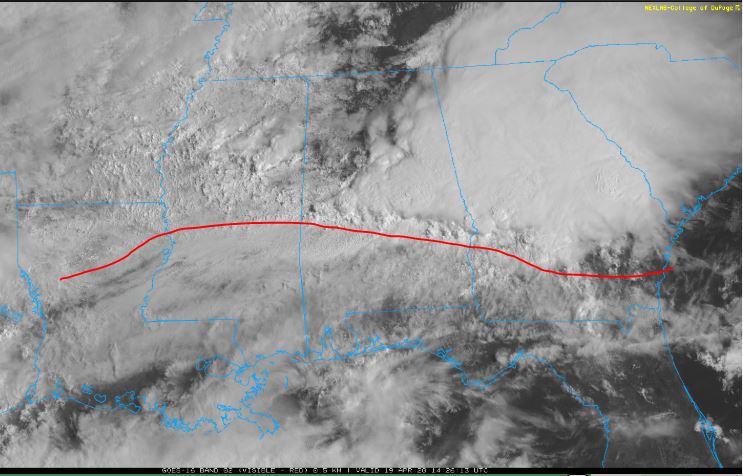 The surface observations show moisture advecting into the threat area from the Gulf of Mexico.  Notice the moderate surface winds moving from the Gulf into the southern states.  Notice also that the location of the warm front is marked with a change in temperature, from the 70s F in the south to the 50s F in the north.  There is an ongoing MCS running its course.  It will continue to move east, but may leave a few boundaries to watch. 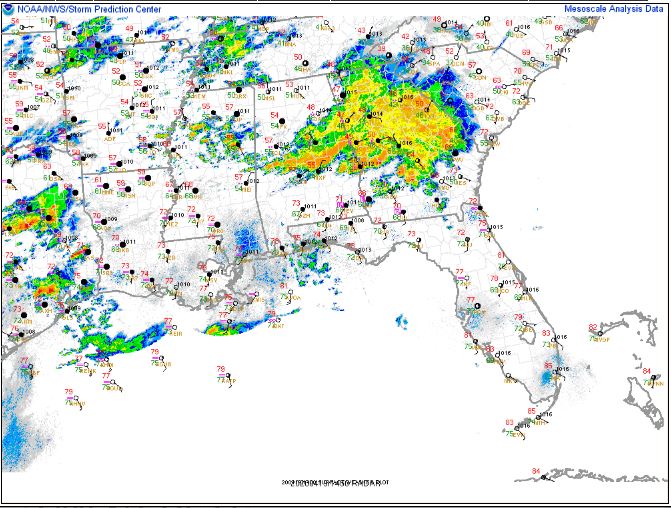 The surface pressure chart shows no strong pressure systems or gradients, and none are expected over the next six hours. 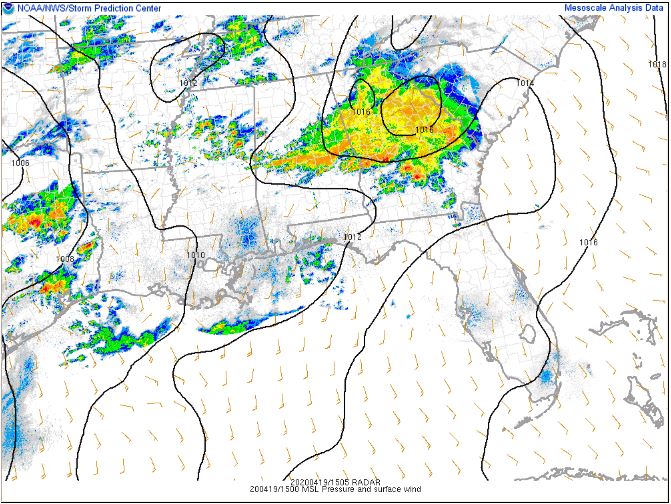 The HRRR simulated reflectivity is showing a threat for training cells that will move nearly due east all day and into the evening. 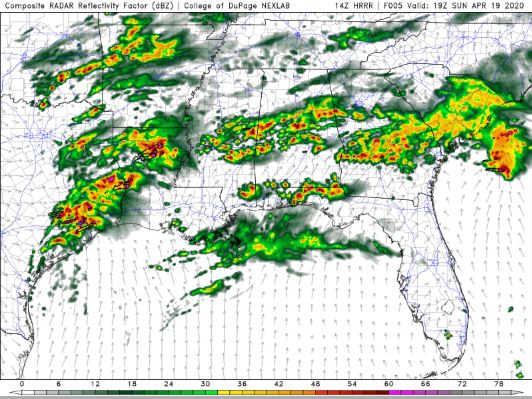 The HRRR is showing only a dryline over eastern Texas.  It is not expected to move east until early tomorrow morning.  There will be ample moisture in Dixie Alley, but the dryline won’t be a boundary that will play into storm formation today. 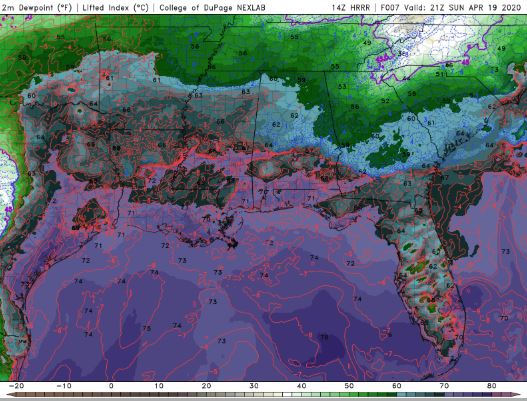 The HRRR CAPE/CINH plot is showing CAPE rising to 4000 J/kg  this afternoon in southern Louisiana and Mississippi. 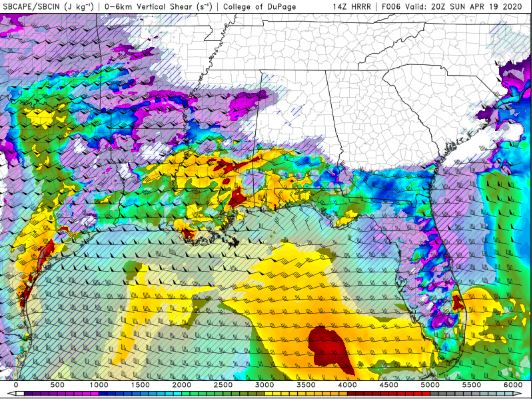 The HRRR shows that the supercell parameter will be consistently high, particularly over southern Louisiana and Mississippi, probably getting dragged higher because of the high CAPE. 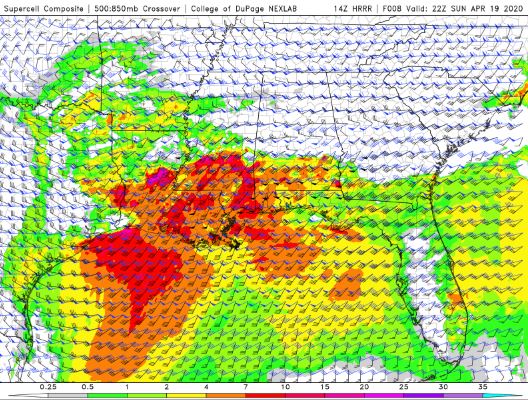 The HRRR also shows that the SigTor parameter is high, particularly in southeastern Louisiana. 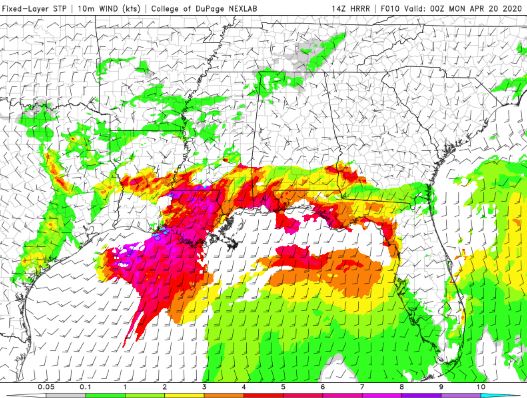 The HRRR shows a few strong helicity swaths cutting through Mississippi and Alabama til tomorrow morning.  The strongest one hits well after sunset, in the early morning hours. 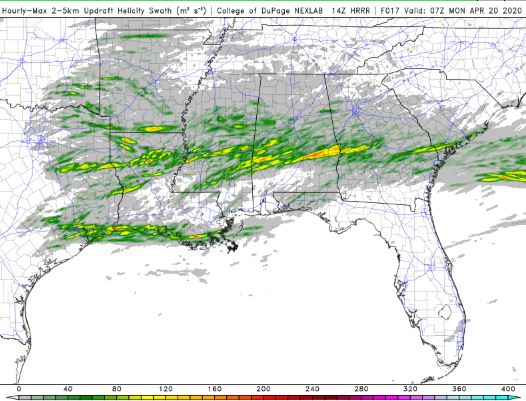 If I were targeting and chasing today, I would probably head towards southern Mississippi, maybe as far north as Meridian.  My three targets would be:
1.  Hattiesburg, MS
2.  Meridian, MS
3.  State Line, MS
Somewhere in that triangle.  The simulated reflectivity is predicting a training line, but I’m hoping for a fewer discrete cells that may break out south of it, in the high cape and strong winds. 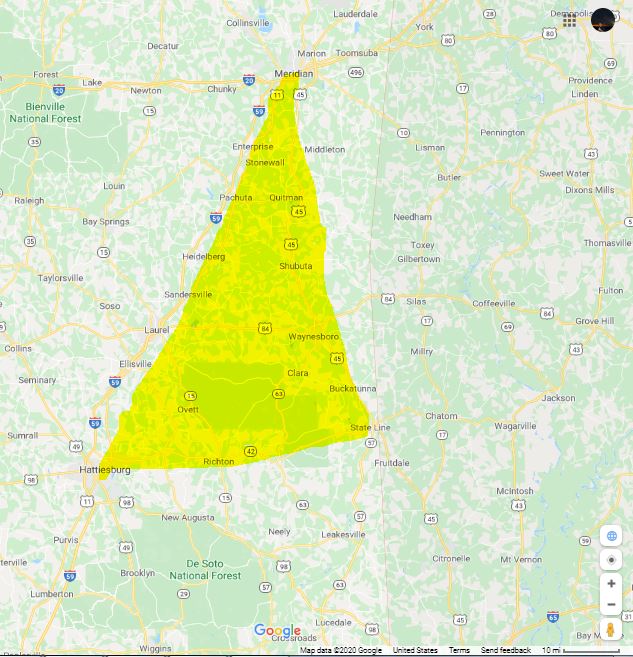 This would still be a very difficult chase.  This terrain is awful- you’re basically chasing in the bayou.  At best, you are in the woods and hills of Mississippi with only a few hundred yards of visibility at best.  It is going to be a drone-chase day, as getting above that treeline is going to be imperative.

I didn’t change the paragraph above from the last moderate risk.  Also, the timing and the storm mode will be an issue.  I think some things will kick up well after dark, as the cold front dislodges and moves east.  These will be unchaseable.

This blog is about my tales in storm chasing. My name is Seth Price and I am an instrumentation instructor at New Mexico Tech. My amateur radio call sign is N3MRA.
View all posts by highplainschasing →
This entry was posted in Practicing Concepts, Predictions, Satellite Imagery, Severe Weather and tagged #alwx, #gawx, #lawx, #mswx, 15% hatched tornado ring, Alabama, Georgia, Louisiana, meteorology, Mississippi, moderate risk, severe weather, weather. Bookmark the permalink.