Posted on April 14, 2020 by highplainschasing

It is time to follow up on the SPC Moderate Risk that occurred on 4/12/20.  According to the Storm Prediction Center (SPC), there were 54 tornado reports and the data is still being processed.  Unfortunately, there were at least five reported fatalities and nine injuries, according to current data at the SPC, but there have been more listed on local news outlets.

The SPC Storms Reports graphic is shown below: 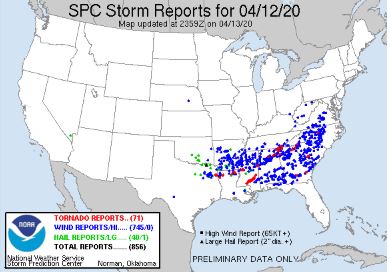 One of the big ones struck Soso, MS, and I’m waiting to see how that one is rated.  It was gigantic and did a lot of damage, annihilating the town.

It was a rough day in the south.

This blog is about my tales in storm chasing. My name is Seth Price and I am an instrumentation instructor at New Mexico Tech. My amateur radio call sign is N3MRA.
View all posts by highplainschasing →
This entry was posted in Follow Up and tagged #alwx, #gawx, #lawx, #mswx, #tnwx, 15% hatched tornado ring, 4/12/20, Alabama, Georgia, Louisiana, meteorology, Mississippi, moderate risk, Soso, Tennessee, tornado, weather. Bookmark the permalink.