Posted on February 10, 2020 by highplainschasing

This morning, the weather has been cloudy, cold and still.  It was drizzling in Rio Rancho.

From the NWS in Albuquerque, NM:  light early morning rain and snow will taper off towards the afternoon, as the cold front weakens.  There will be a brief lull, but then a potent winter storm will impact the state.  A closed low will move from California to the NM/AZ border in phase with a shortwave trough.  Strong frontogenesis and above average moisture will lead to rain and snow bands by this evening.

The NWS in Albuquerque, NM, has issued a Winter Storm Warning for most of the state, with a few Winter Storm Watches at the edges.  The NWS Watches and Warnings graphic is shown below. 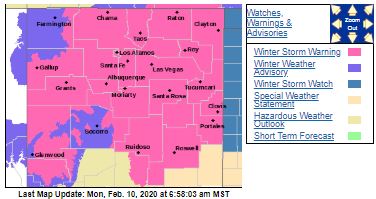 The visible satellite imagery is unavailable at this time.  The enhanced infrared imagery shows cloudy skies over the state this morning.  These clouds are thick, with cool tops, and likely have falling precipitation. 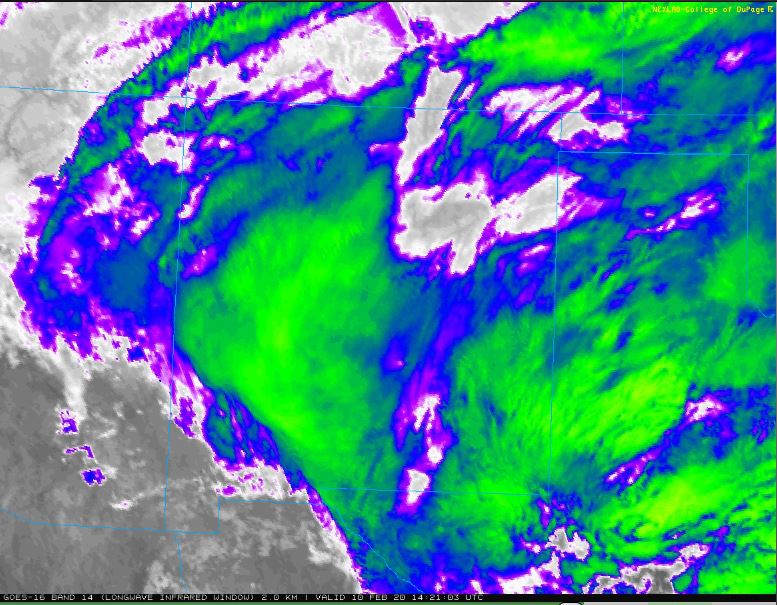 The 12Z upper air sounding from Albuquerque, NM, shows a nearly-saturated column up to 300 mb.  There was 0.48 inches of precipitable water present in the column this morning.  There was no Convective Available Potential Energy (CAPE), no Convective Inhibition (CIN), and the Lifted Condensation Level (LCL) was 377 m.  There was a moderate thermal inversion near the surface and the 0-3 km lapse rate was 5.9 C/km.  The hodograph shows that the low-level shear was 16 kts (due mostly to directional changes) and the deep-layer shear was 62 kts (due mostly to speed changes). 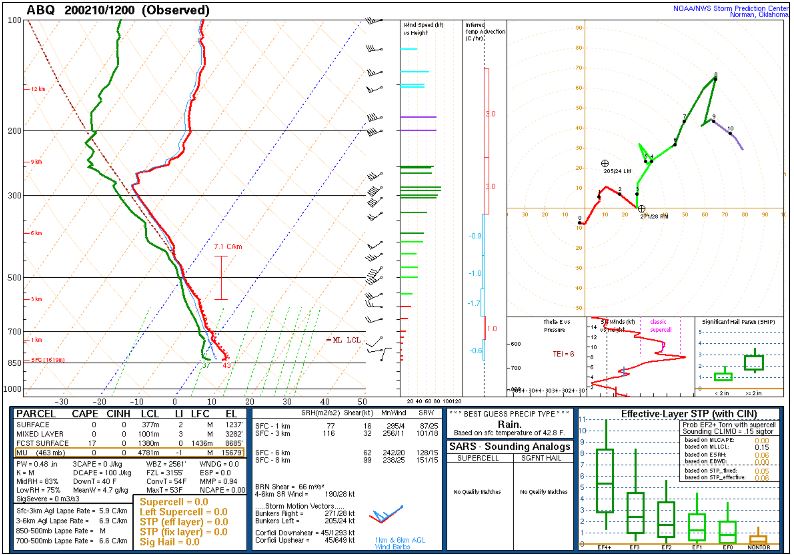 The surface observations chart (from the SPC Mesoscale Analysis Map) shows cold temperatures and high surface humidity.  The skies are cloudy (according to the sensors) and the winds are light and variable.  The Doppler RADAR shows scattered precipitation over the southern half of the state this morning. 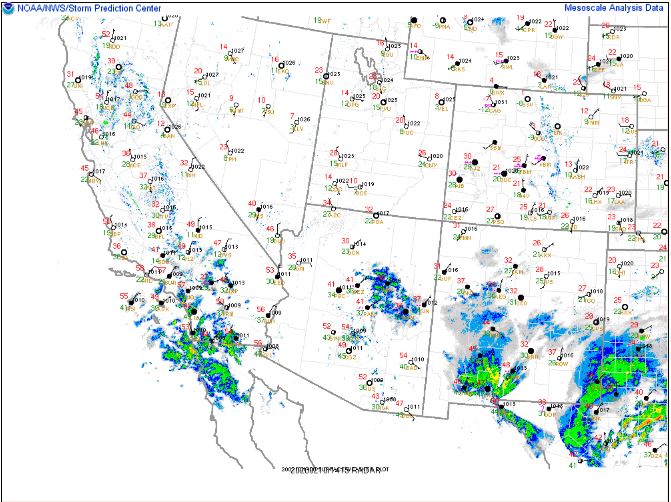 The surface pressure chart (from the SPC Mesoscale Analysis Map) shows that we are under no strong pressure systems or gradients at this time.  There is a closed low over California that is moving east, according to the RAP, though our pressure will not change significantly in the next six hours. 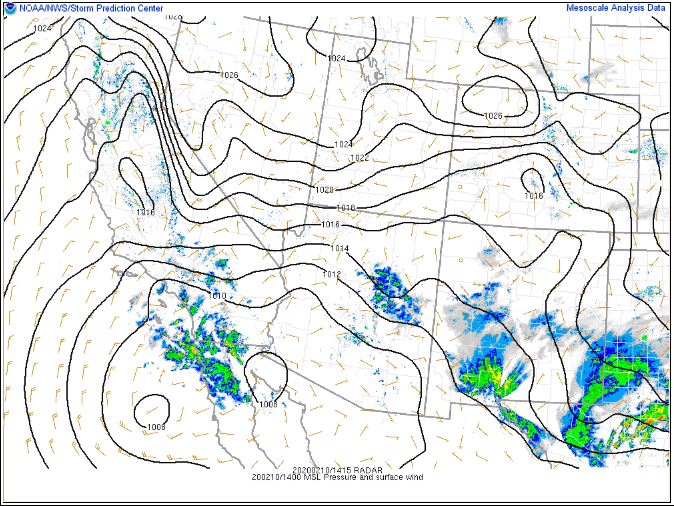 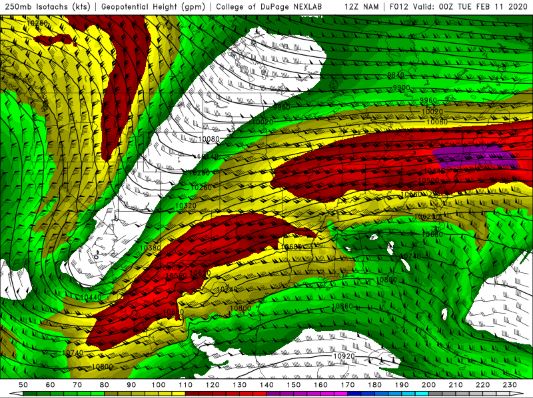 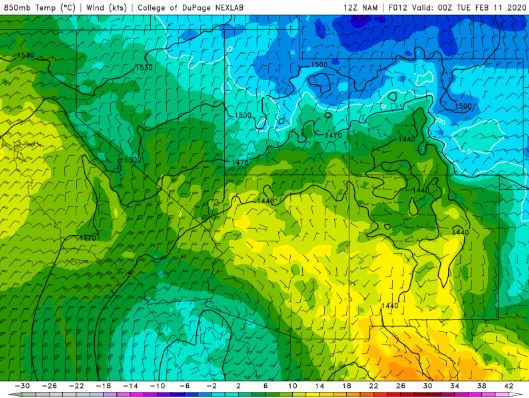 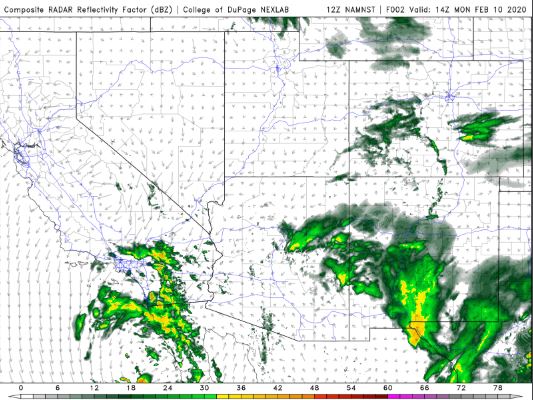 The Nested NAM 10-1 snow chart shows some light snow this morning, but quite a bit of the state will see snow by tomorrow morning.  The Kuchera chart shows a similar pattern of snow. 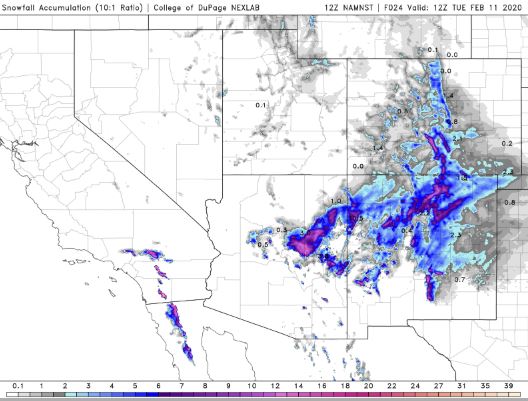 The Nested NAM predicts that the high temperatures for the middle Rio Grande River Valley will peak in the mid 50s F. 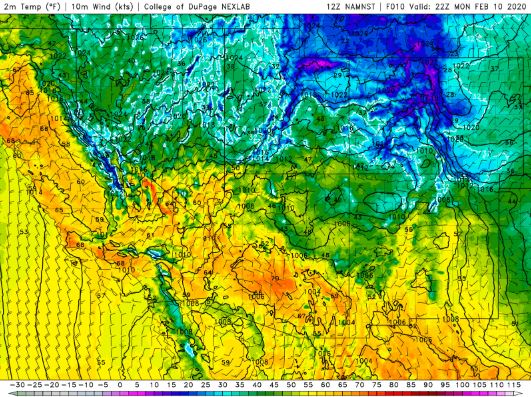 The low temperatures are expected to drop into the lower 30s F right before sunrise tomorrow morning. 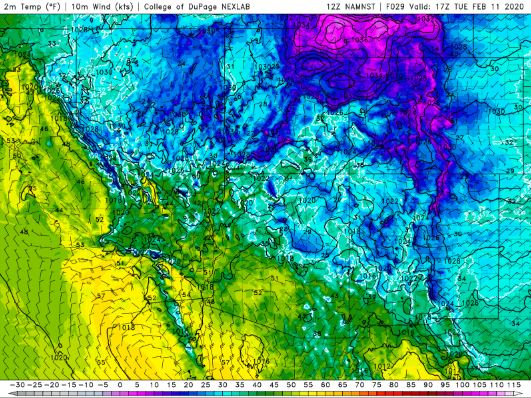 The Nested NAM shows that the dewpoints will rise into the upper 30s F by this evening. 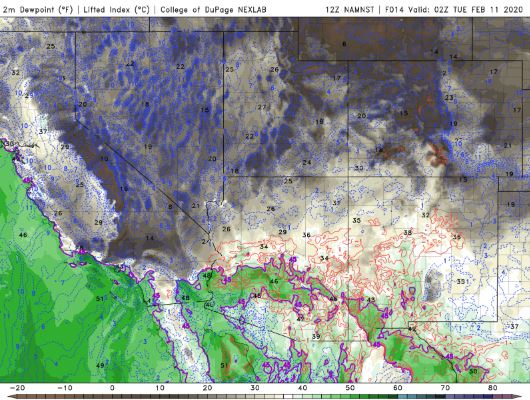 The Nested NAM shows strong winds are not expected until tomorrow morning.  This chart has been excluded from today’s post.

The Nested NAM simulated infrared imagery shows skies will be cloudy all day, and all night, except for some light clearing this afternoon. 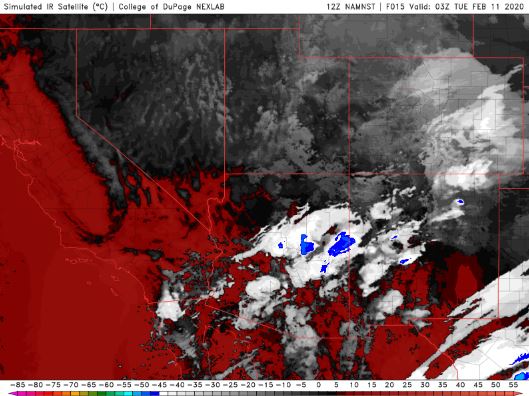 Today will be cloudy, wet and gross.  I meant to wear my boots today, but I didn’t, so I’ll end up tromping through the snow in my lightweight tennis shoes tomorrow at Magdalena and Rio Rancho (as I won’t return home until tomorrow evening).