Posted on October 29, 2019 by highplainschasing

Yesterday was a sunny, cool and windy in Socorro and Magdalena.

The weather is clear, cold and still so far this morning in Rio Rancho and Albuquerque.

From the NWS in Albuquerque, NM:  A major cold front will move through the state tonight due to an impressive storm system that is forming over Utah.  This system will bring freezing drizzle and light snow to the northeastern corner of the New Mexico starting this evening.

The NWS in Albuquerque, NM, has issued a Winter Weather Advisory for northeastern New Mexico and a Special Weather Statement concerning the unseasonably cold weather for the rest of the state.  The NWS Watches and Warnings graphic is shown below. 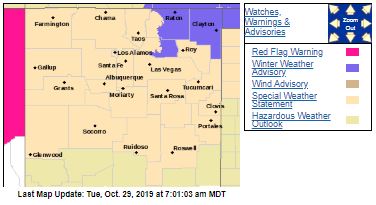 The visible satellite imagery is unavailable at this time.  The enhanced infrared imagery shows a small line of clouds in the southeastern corner of the state. 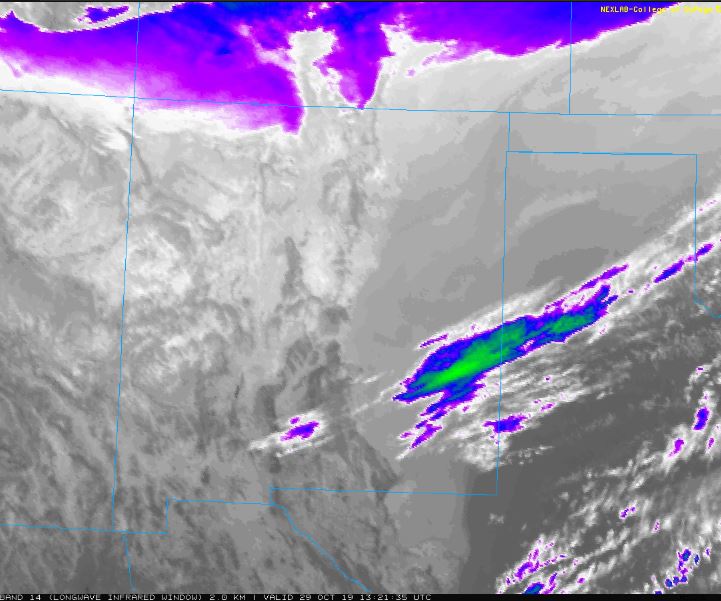 The 12Z upper air sounding from Albuquerque, NM, shows a dry atmosphere this morning.  There was 0.14 inches of precipitable water present in the column this morning.  There was no Convective Available Potential Energy (CAPE), no Convective Inhibition (CIN), and the Lifted Condensation Level (LCL) was 1020  m.  There was a large thermal inversion near the surface and the 0-3 km lapse rate was 1.6 C/km.  The hodograph shows that the low-level shear was 29 kts (due mostly to directional changes) and the deep-layer shear was 66 kts (due mostly to speed changes). 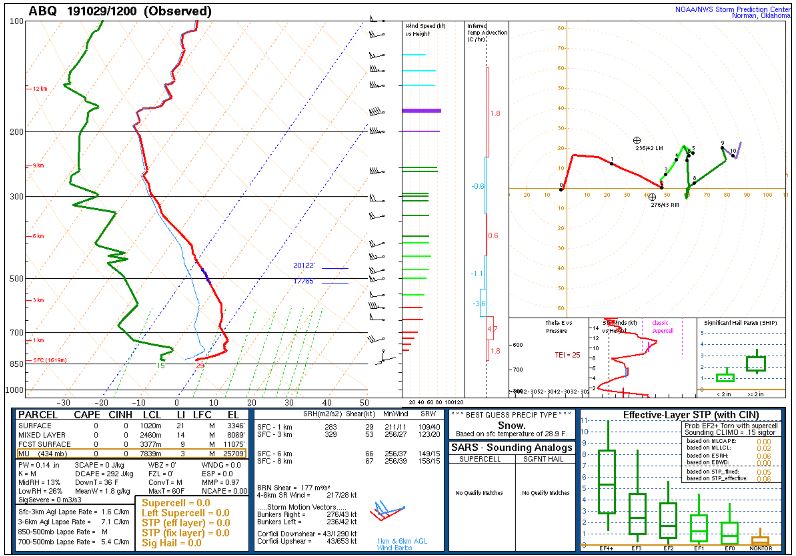 The surface observations chart (from the SPC Mesoscale Analysis Map) shows cold temperatures and low surface humidity.  The skies are a sunny (according to the sensors) and the winds are light and variable. 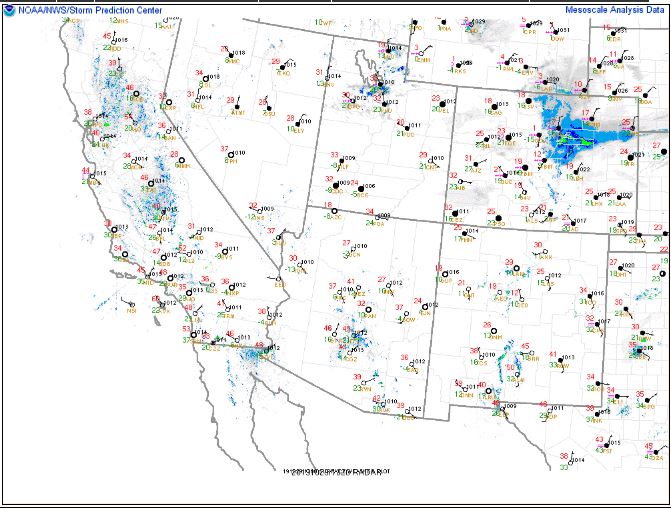 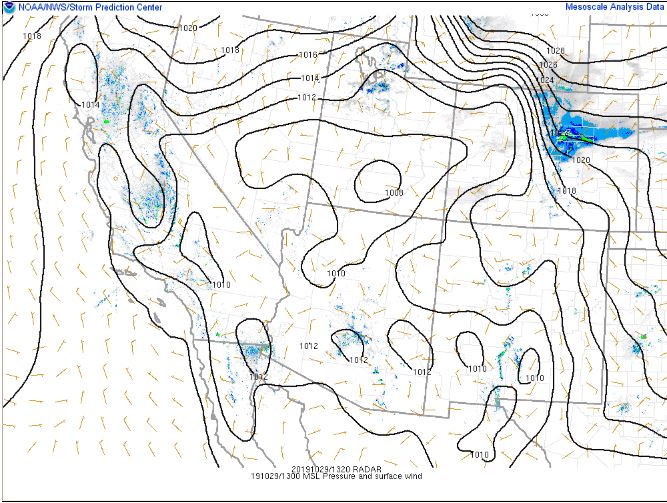 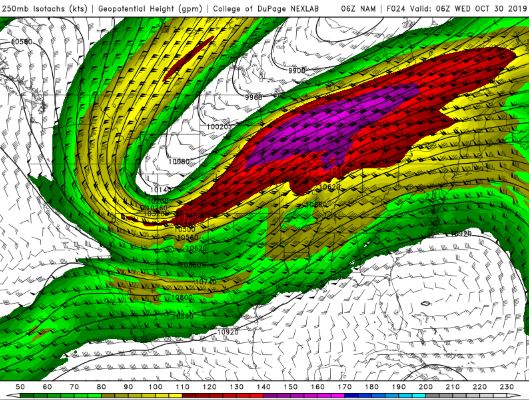 The NAM 850 mb chart shows strong Cold Air Advection (CAA) from the north as the cold front moves through the state this evening. 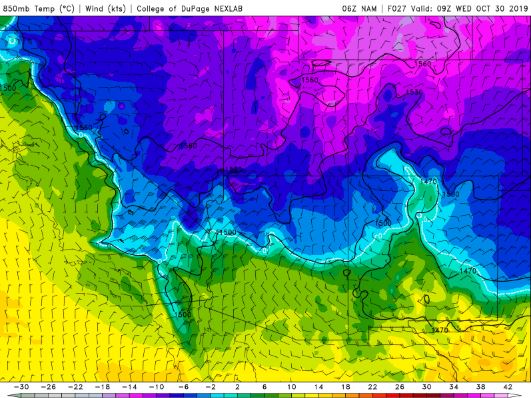 The Nested NAM simulated reflectivity chart shows storms and precipitation are possible late this evening, particularly in the northeastern corner of the state. 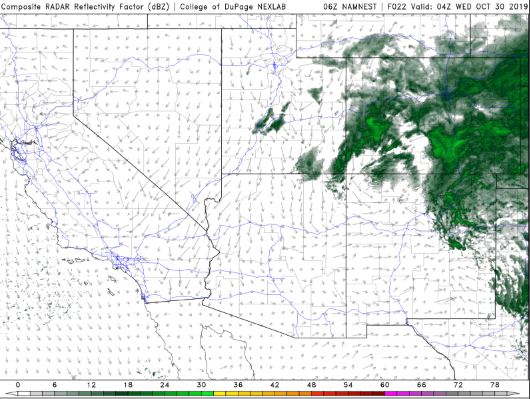 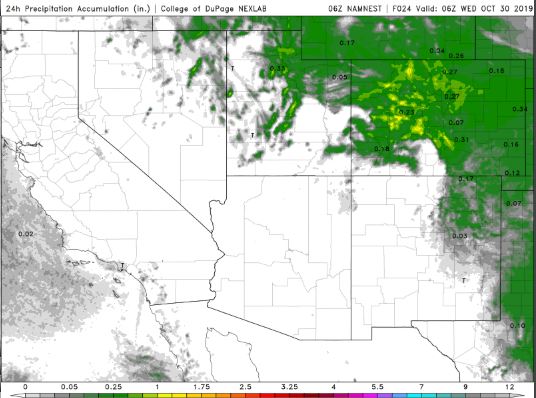 The Nested NAM predicts that the high temperatures for the middle Rio Grande River Valley will peak in the upper 50s F today. 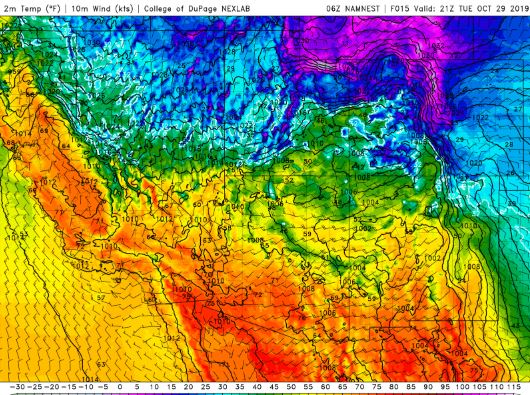 The low temperature will be in the lower 20s F just before sunrise tomorrow. 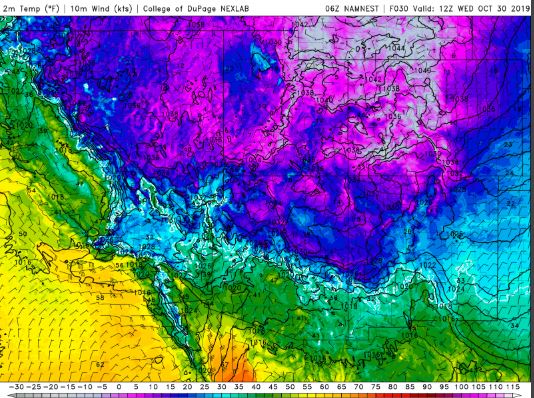 The Nested NAM shows that the dewpoints will peak in the lower 20s F. 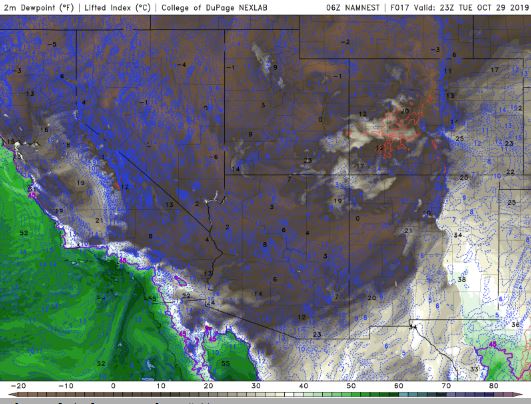 The Nested NAM shows strong winds will be possible this afternoon, particularly near the mountain tops and through the canyons. 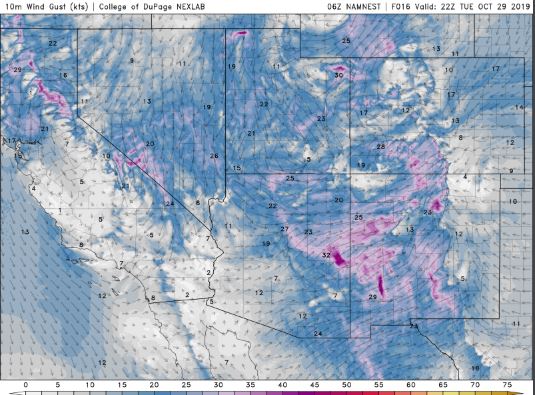 The Nested NAM predicts that clouds will begin to drift south, with cloudy skies possible north of I-40 by the late night hours. 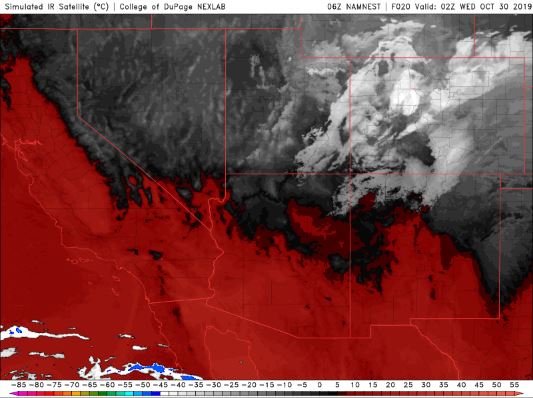 I’m not thrilled about early winter.  However, two weeks from now, I’ll be in Florida, so perhaps this is a little karma, as I am getting to dodge some of the cold weather.