Posted on October 10, 2019 by highplainschasing

Yesterday was a sunny, mild and still day.  The evening was a little chilly.

From the NWS in Albuquerque, NM:  a strong cold front will push into New Mexico from the north, dropping temperatures and creating gusty winds for the northern half of the state.  Many locations will see their first hard freeze tonight.

The NWS in Albuquerque, NM, has issued a Hazardous Weather Outlook concerning a freezing temperatures for many locations tonight.  The NWS Watches and Warnings graphic is shown below: 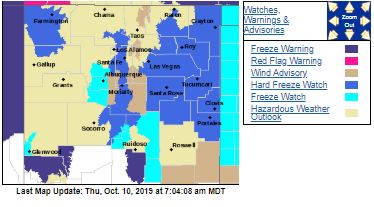 The visible satellite imagery is unavailable at this time.  The enhanced infrared imagery shows that there is some dense fog in some of the valleys this morning. 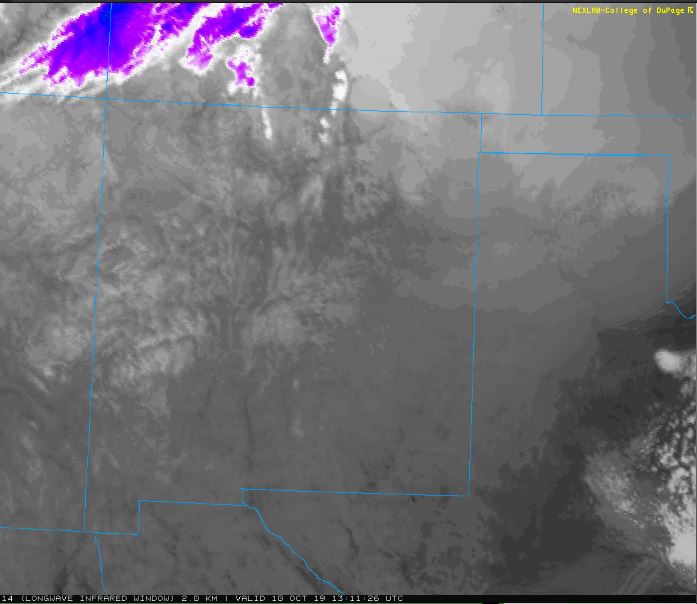 The 12Z upper air sounding from Albuquerque, NM, shows the atmosphere has dried out overnight.  There was 0.36 inches of precipitable water present in the column this morning.  There was no Convective Available Potential Energy (CAPE), no Convective Inhibition (CIN), and the Lifted Condensation Level (LCL) was 1768 m.  There was large thermal inversion near the surface and the 0-3 km lapse rate was 5.9 C/km.  The hodograph shows that the low-level shear was 20 kts (due mostly to directional changes) and the deep-layer shear was 62 kts (due mostly to speed changes). 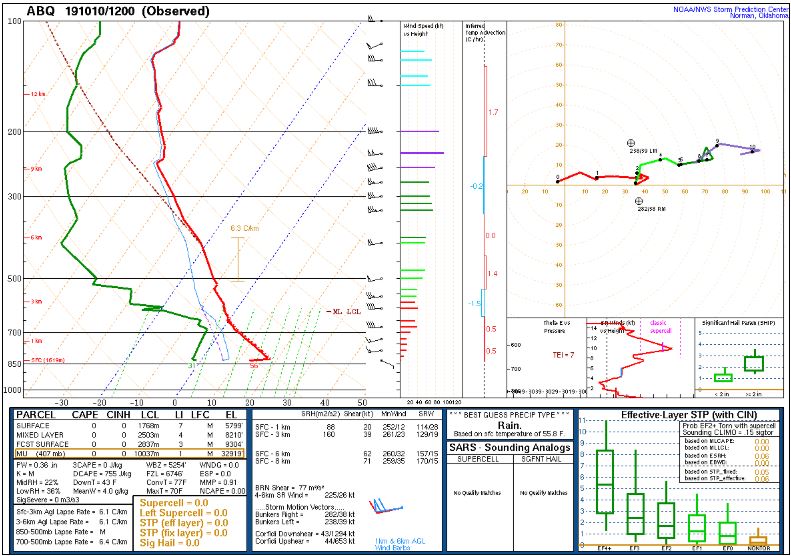 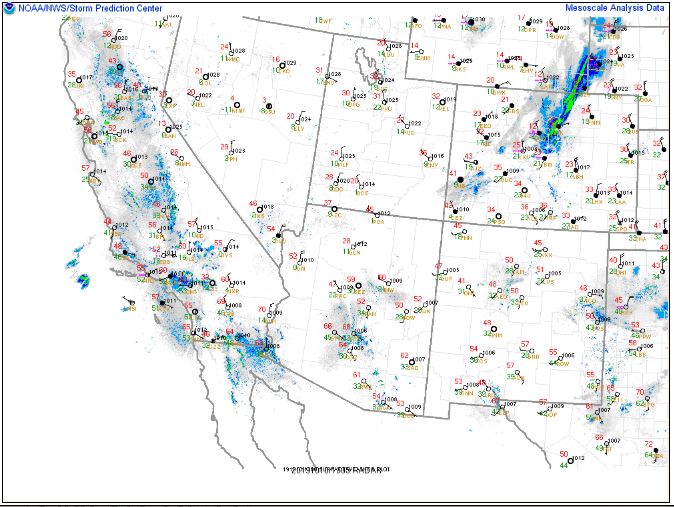 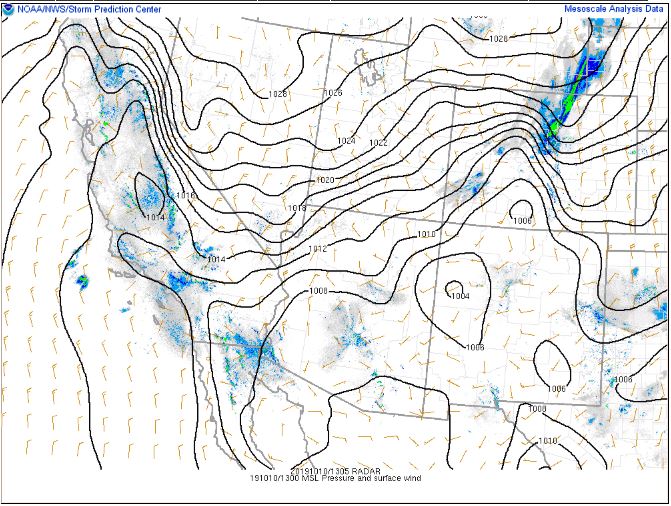 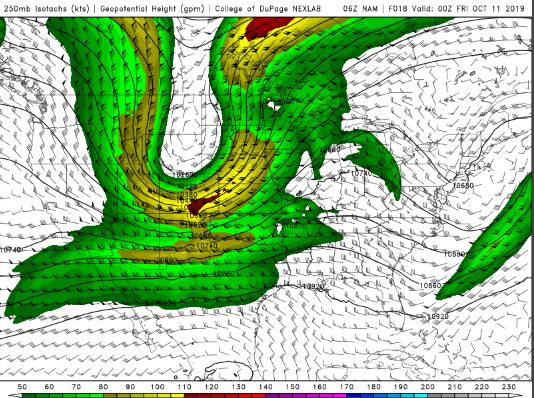 The NAM 850 mb chart shows strong Cold Air Advection (CAA) over the northern half of the state.  There’s our cold front! 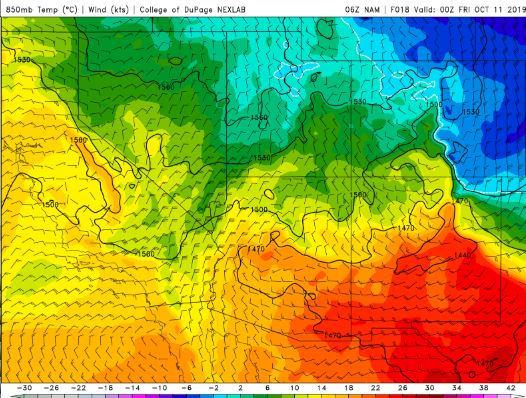 The Nested NAM predicts that the high temperatures for the middle Rio Grande River Valley will peak in the lower 70s F today. 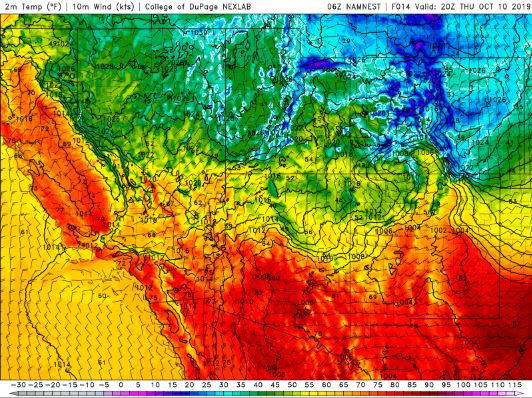 The temperature is expected to drop into the lower 30s F before sunrise. 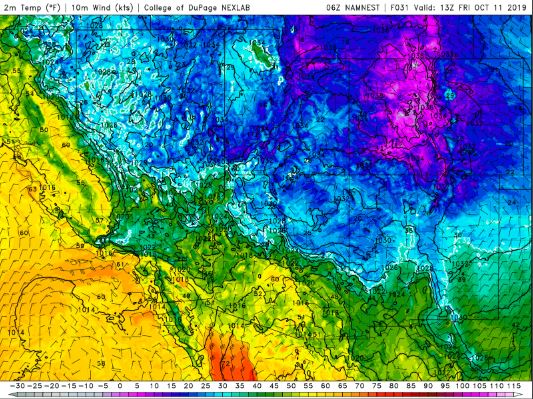 The Nested NAM shows that the dewpoints will drop into the 10s F by this evening. 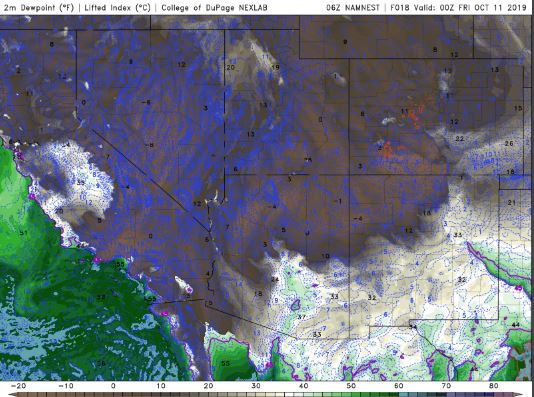 The Nested NAM shows strong winds will be likely with the passage of this cold front. 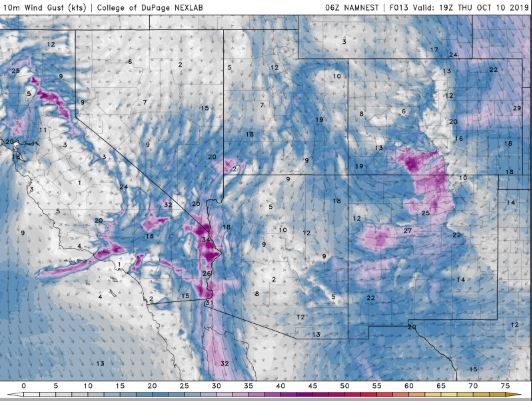 The Nested NAM predicts mostly clear skies today.  This chart has been excluded from today’s post.

This is probably the end of my garden.  I have been watching this system for a few days and I had my doubts it would drop as far south (and as cold), but I was mistaken.  I don’t expect my plants to survive and will disconnect the hoses when I get home.

This blog is about my tales in storm chasing. My name is Seth Price and I am an instrumentation instructor at New Mexico Tech. My amateur radio call sign is N3MRA.
View all posts by highplainschasing →
This entry was posted in Local WX, Practicing Concepts, Predictions, Satellite Imagery and tagged #newmexicotrue, #nmtrue, albuquerque, Belen, Freeze Watch, Los Lunas, magdalena, meteorology, New Mexico, nmwx, rio rancho, Socorro, weather. Bookmark the permalink.