Posted on September 24, 2019 by highplainschasing

Yesterday was sunny, warm and still.  We had some heavy rain in Rio Rancho last night, with a few strokes of lightning and a lot of wind.  I needed a jacket to unload my pickup truck.

This morning has been partly cloudy, cool and still.  I brought my jacket with me today.

From the NWS in Albuquerque, NM:  The forecast for the next few days will be tricky.  It is all based on the path and timing of the low pressure system that developed over Arizona yesterday.  It has moved over southern California and is expected to shift south today, but it will wobble around the southwest over the next few days.  Scattered showers and thunderstorms are possible over New Mexico, based on its motion and the advection of moisture into the state.

The NWS in Albuquerque has issued a Hazardous Weather Outlook concerning strong thunderstorms that are possible this afternoon and evening.  Storms may contain large hail, damaging winds, and locally heavy rain that can lead to flash flooding. 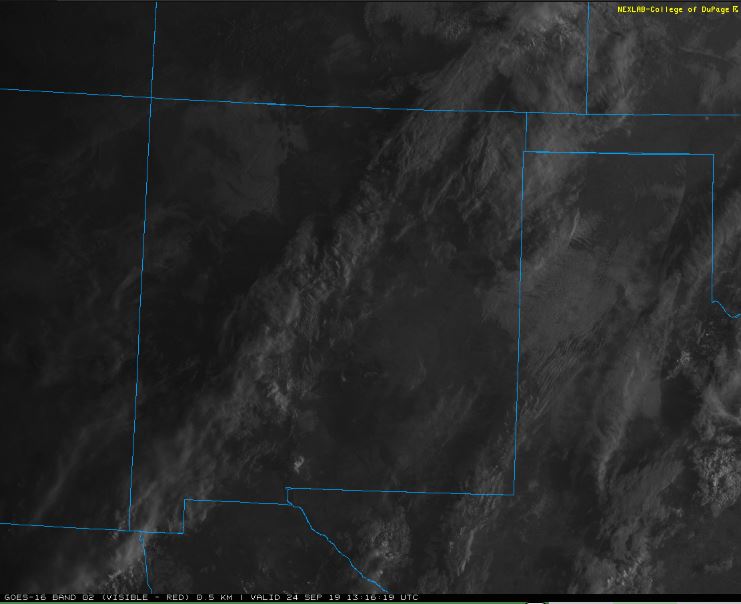 The 12Z upper air sounding from Albuquerque, NM, shows moisture has increased as compared to yesterday.  There was 0.73 inches of precipitable water in the column.  There was no Convective Available Potential Energy (CAPE), no Convective Inhibition (CIN), and the Lifted Condensation Level (LCL) was 381 m.  There was no thermal inversion near the surface and the 0-3 km lapse rate was 4.5 C/km.  The hodograph shows that the low-level shear was 14 kts (due mostly to directional changes) and the deep-layer shear was 453 kts (due mostly to speed changes). 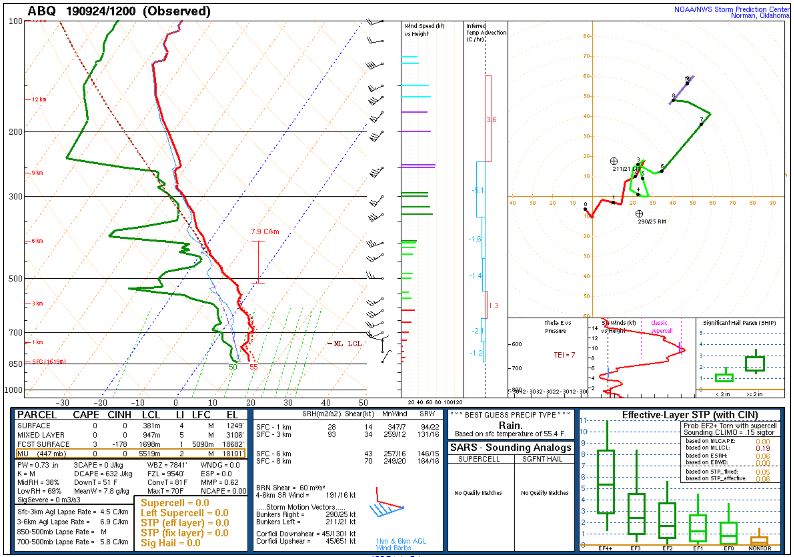 The surface observations chart (from the SPC Mesoscale Analysis Map) shows cool temperatures and high surface humidity.  The skies are a partly cloudy (according to the sensors) and the winds are light and variable. 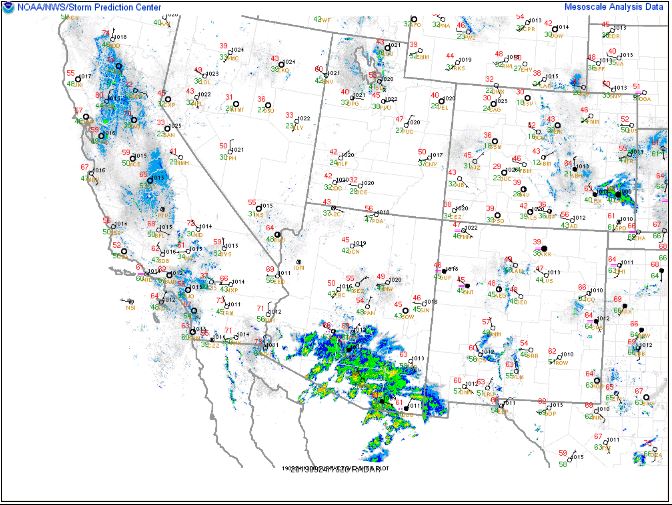 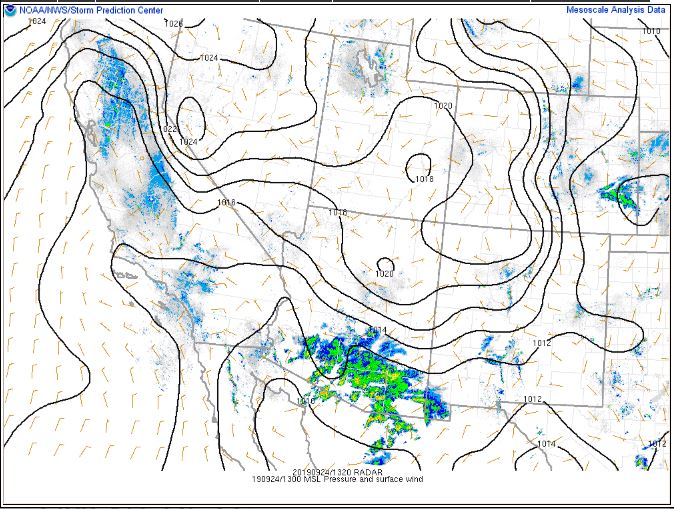 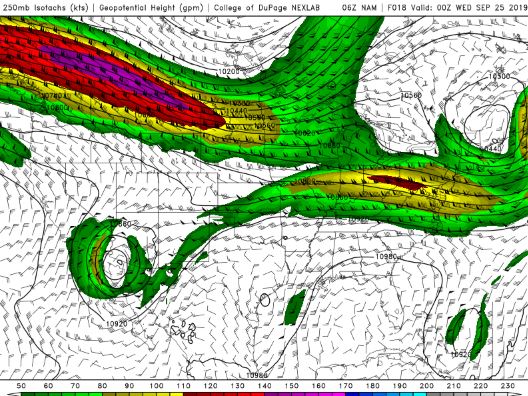 The Nested NAM simulated reflectivity chart shows a large cluster of storms over the southwestern corner of the state today. 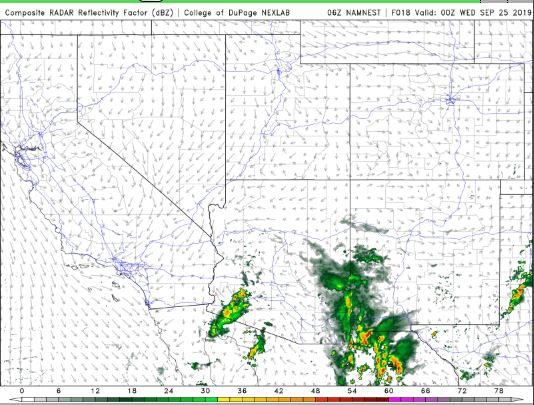 The Nested NAM precipitation chart shows that the heaviest rain is expected in the southwestern corner of the state. 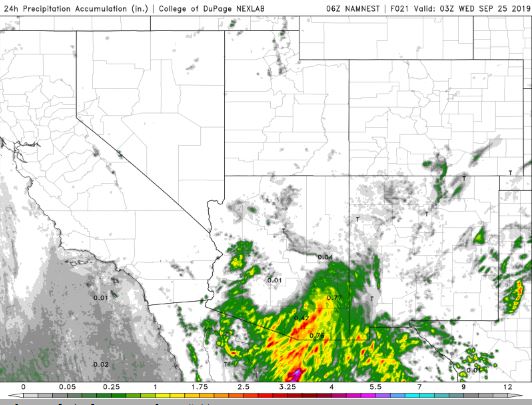 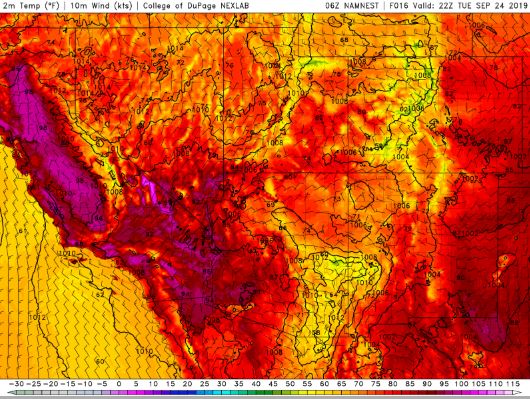 The Nested NAM shows that the dewpoints will remain in the 40s F today. 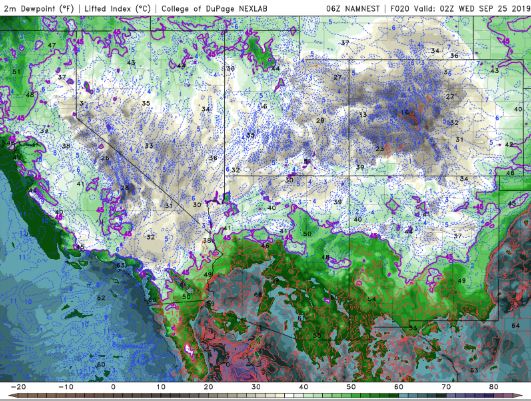 The Nested NAM shows that strong winds are unlikely in the Rio Grande River Valley today.  This chart has been excluded from today’s post.

The Nested NAM predicts some cloud cover in the southern half of the state by this evening. 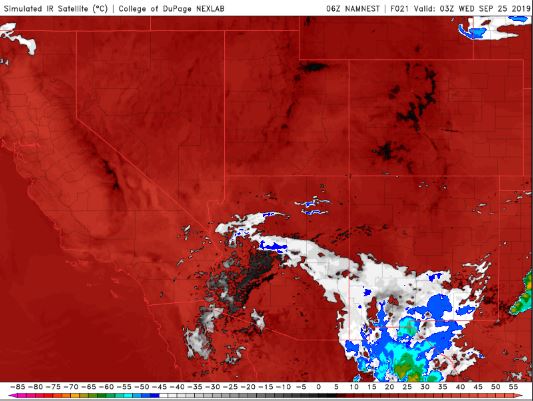 The Nested NAM doesn’t seem to think there will be many showers and thunderstorms today over the Albuquerque Metro area.  I tend to disagree with it, based on the high humidity and the expectation that the skies will clear later.  The lapse rates are not impressive right now, but with diurnal heating, that will improve, and I bet our chances of showers and thunderstorms will increase this afternoon.