Posted on June 13, 2019 by highplainschasing

Yesterday was hot and sunny all day.

This morning has been sunny, mild and still.

Temperatures are a little warmer today.  There is a threat for strong to severe thunderstorms in the northeastern corner of the state.  Drier air is pushing in from the west, and that will make today and tomorrow gusty and hot.

The Albuquerque, NM, NWS Office has issued a Hazardous Weather Outlook concerning strong storms, particularly in the northeastern corner of the state.  Primary threats will be heavy rain, gusty winds and small hail.

The visible satellite imagery shows a few clouds this morning, particularly over the eastern half of the state. 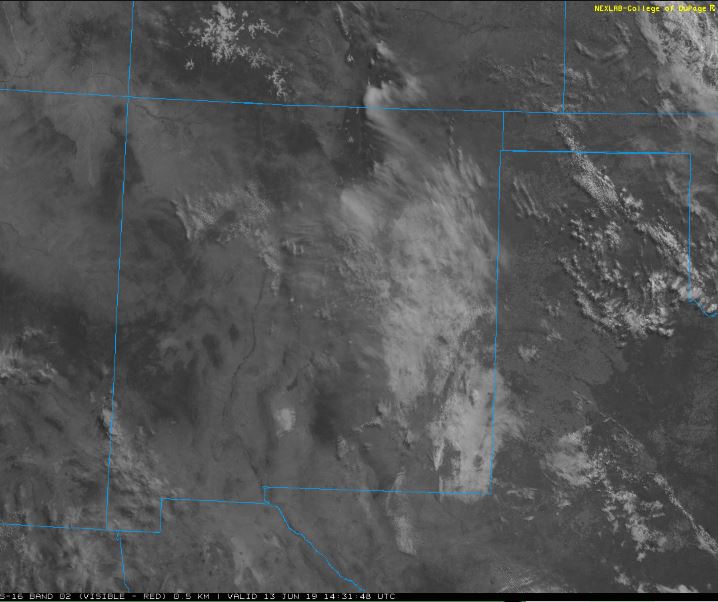 The 12Z upper air sounding from Albuquerque, NM, shows a relatively humid atmosphere this morning.  There was 0.64 inches of precipitable water in the column.  There was no Convective Available Potential Energy (CAPE), no Convective Inhibition (CIN), and the Lifted Condensation Level (LCL) was 1784 m.  There were several tiny thermal inversions near the surface and the 0-3 km lapse rate was 5.6 C/km.  The hodograph shows that the low-level shear was 22 kts (due mostly to directional changes) and the deep-layer shear was 25 kts (due mostly to speed changes). 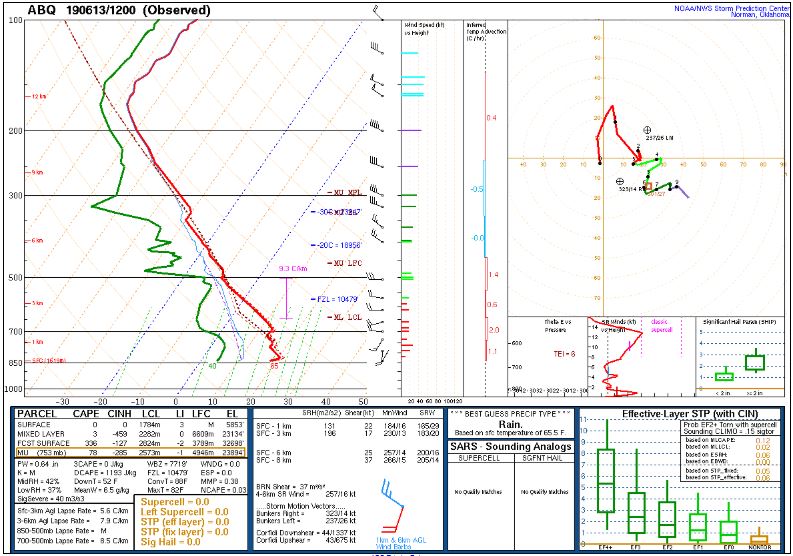 The surface observations chart (from the SPC Mesoscale Analysis Map) shows mild temperatures and moderate surface humidity this morning.  The skies are sunny (according to the sensors) and the winds are light and variable. 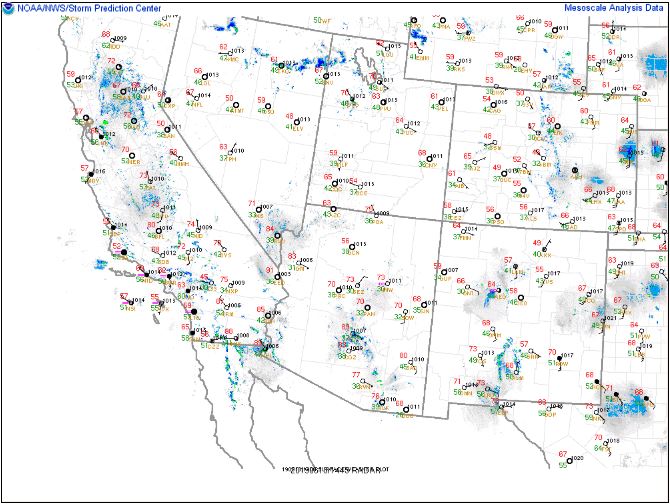 The surface pressure chart (from the SPC Mesoscale Analysis Map) shows no strong pressure systems or gradients over the state this morning.  The RAP shows that a thermal low will develop over southern Colorado and northern New Mexico, generating a moderate pressure gradient over most of the state by this afternoon. 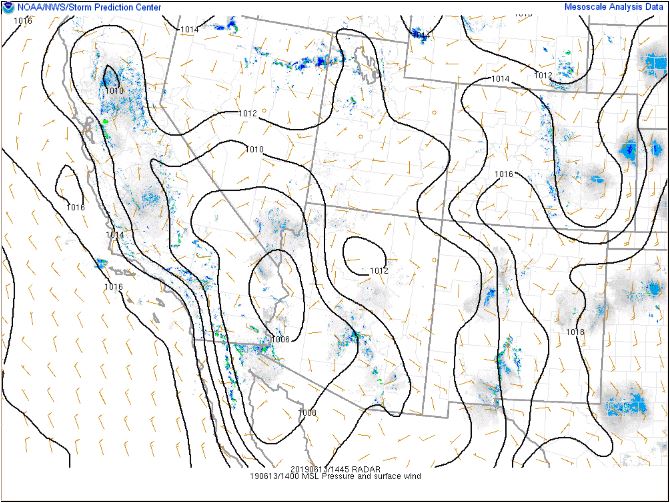 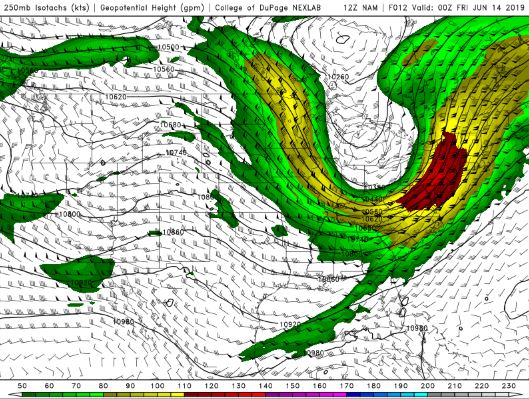 The HRRR simulated reflectivity shows a few storms firing over the I-25 corridor by 21 Z. 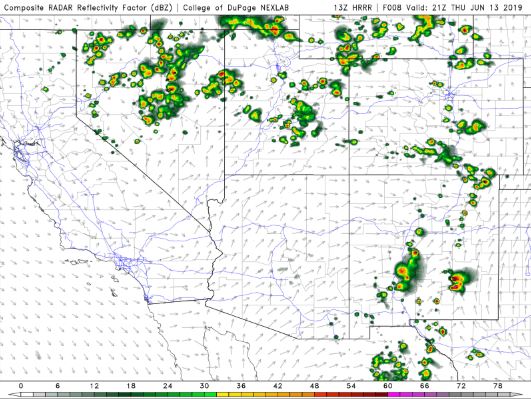 The HRRR predicts that the high temperatures for the middle Rio Grande River Valley will peak in the lower 90s F today. 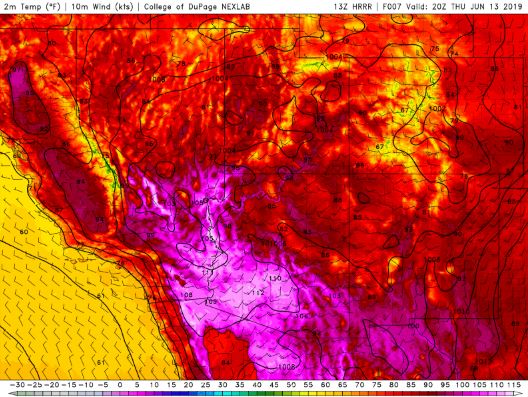 The HRRR shows that the moisture will steadily decrease throughout the day.  The dewpoints are in the upper 30s F, but will drop to the lower 30s F by this afternoon. 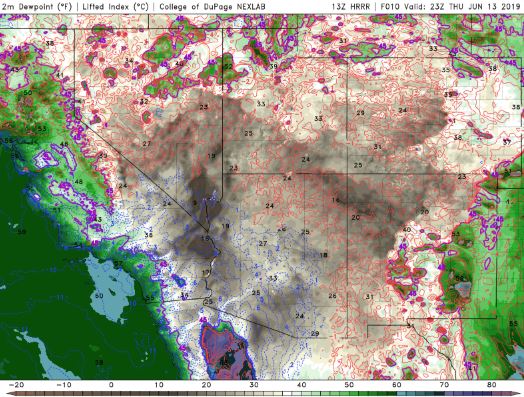 The HRRR shows that a few strong wind gusts are possible today, particularly east of the central mountain chain. 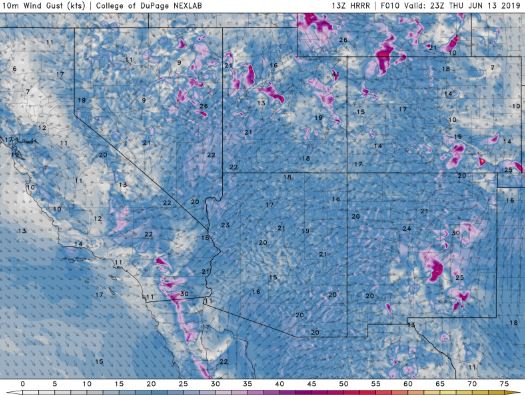 The HRRR predicts that the skies will cloud up by the early afternoon. 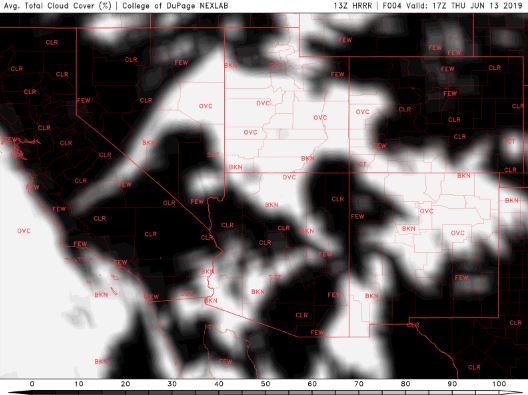 A few showers and thunderstorms are possible today.  Otherwise, it will be hot and breezy all day.  It isn’t mentioned in any of the outlooks, but the wildfire threat will increase today and tomorrow.  We had a small fire in Socorro, and there is still one in the foothills of the Sandias.  These may increase in coverage with the wind today.