Posted on June 2, 2019 by highplainschasing

Yesterday was pleasant enough for a run and a little gardening in the afternoon.

This morning has been a partly cloudy, warm and still.

The NWS in Albuquerque has issued a Hazardous Weather Outlook concerning the possibility of storms, particularly in the southeastern corner of the state.  These storms may have gusty winds and large hail.

The Storm Prediction Center (SPC) has issued a Slight Risk for the eastern half of the state, but extending into the Albuquerque Metro area. 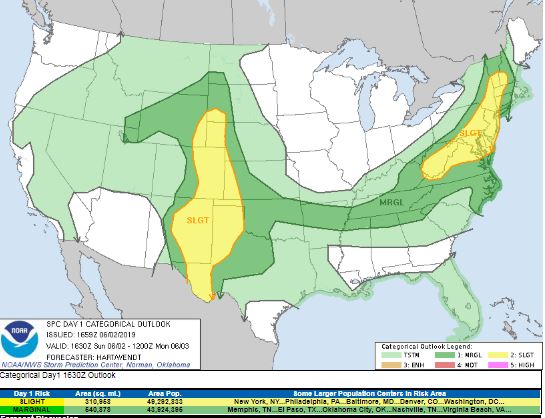 Associated with the Slight Risk is a 2% Tornado Threat ring. 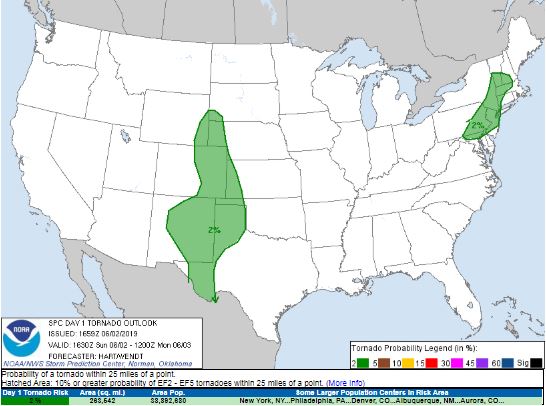 The visible satellite imagery shows haze and left-over anvil material from yesterday’s storms, particularly in the eastern half of the state. 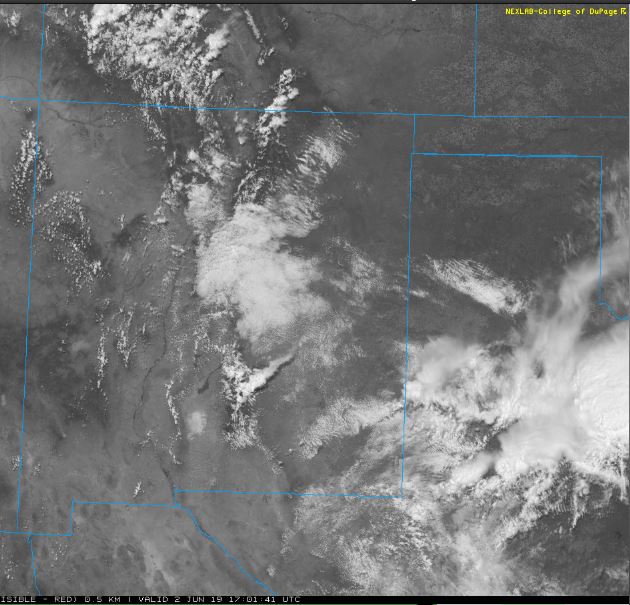 The 12Z upper air sounding from Albuquerque, NM, shows a moderately humid atmosphere below 550 mb.  There was 0.61 inches of precipitable water in the column.  There was 72 J/kg of Convective Available Potential Energy (CAPE), -499 J/kg of Convective Inhibition (CIN), and the Lifted Condensation Level (LCL) was 766 m.  There was a small thermal inversion near the surface and the 0-3 km lapse rate was 5.6 C/km.  The hodograph shows that the low-level shear was 14 kts (due mostly to directional changes) and the deep-layer shear was 60 kts (due mostly to speed changes). 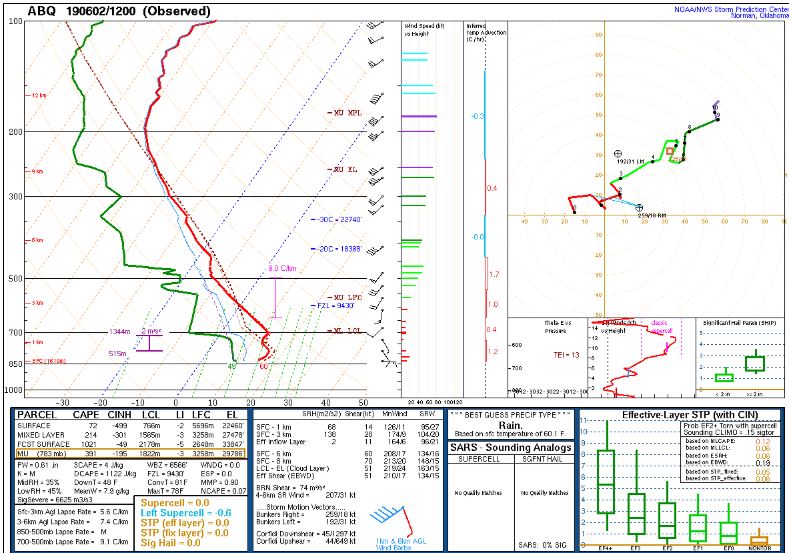 The surface observations chart (from the SPC Mesoscale Analysis Map) shows warm temperatures and high surface humidity this morning.  The skies are clear (according to the sensors) and the winds are light and variable. 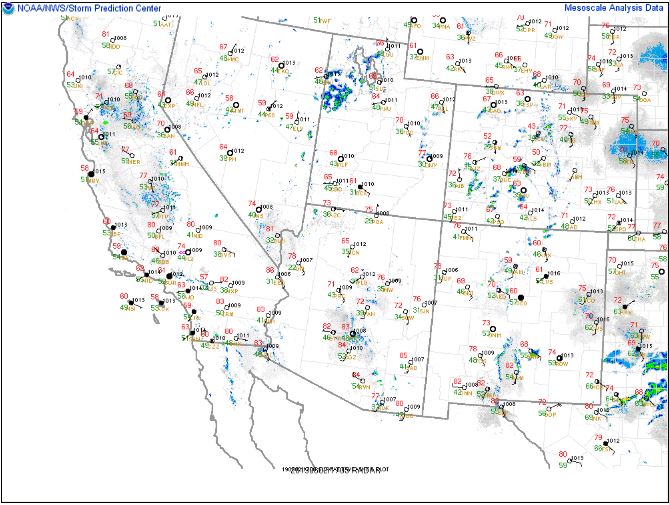 The surface pressure chart (from the SPC Mesoscale Analysis Map) shows no strong pressure systems or gradients over the state so far this morning.  The RAP shows that the pressure will decrease with diurnal heating later today. 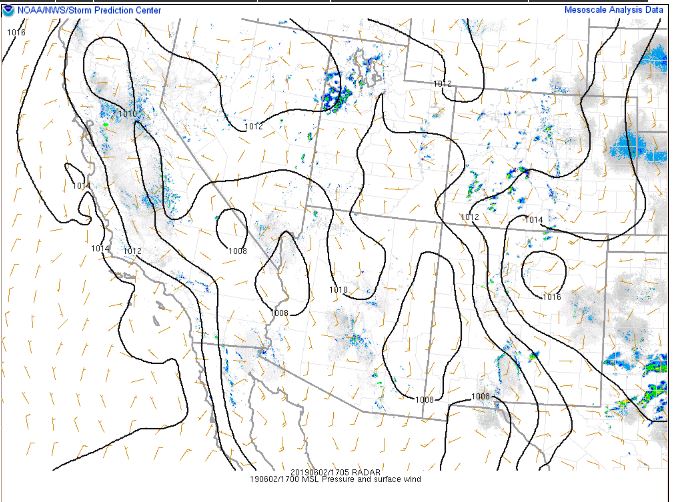 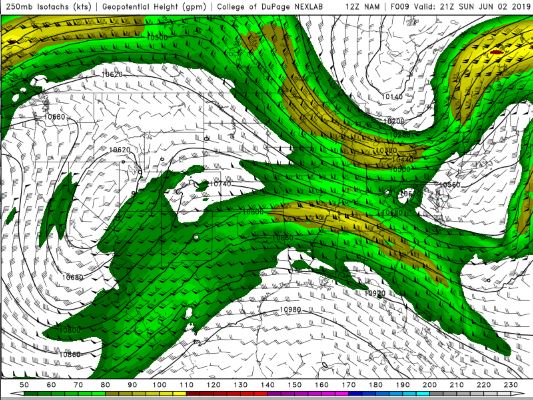 The NAM 850 mb chart shows no strong thermal advection is expected today.  This chart has been excluded from today’s post.

The HRRR simulated reflectivity shows that isolated, discrete storms are possible east of the central mountain chain this afternoon.  One of the cells, just south of I-40, appears to have a good helicity swath as well. 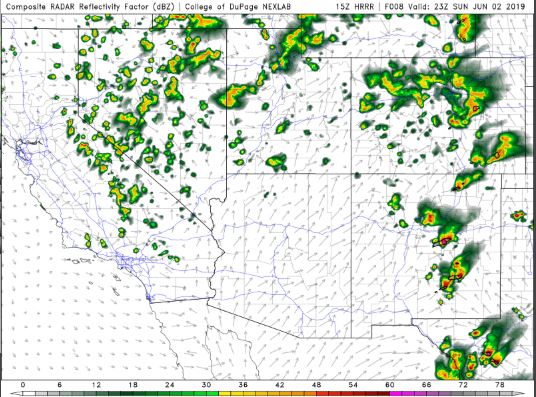 The HRRR predicts that the high temperatures for the middle Rio Grande River Valley will peak in the mid 80s F today. 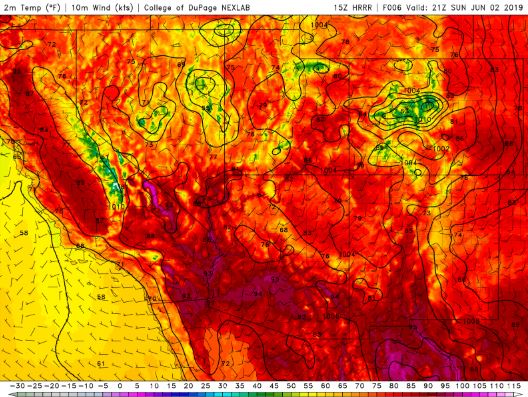 The HRRR shows that the dewpoints will remain in the low 40s F for most of the day for the Albuquerque Metro area.  To the east, a dryline will sharpen throughout the afternoon, aiding the development of afternoon thunderstorms. 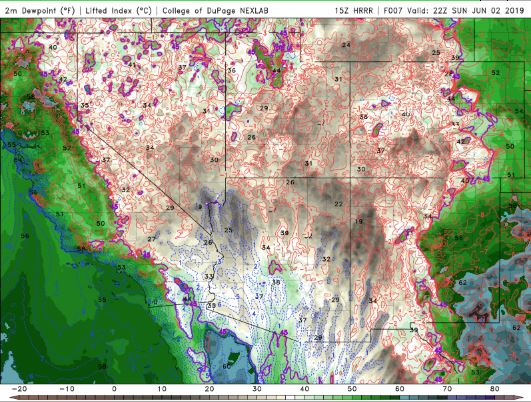 The HRRR shows strong wind gusts are possible, particularly this afternoon in the far eastern part of the state. 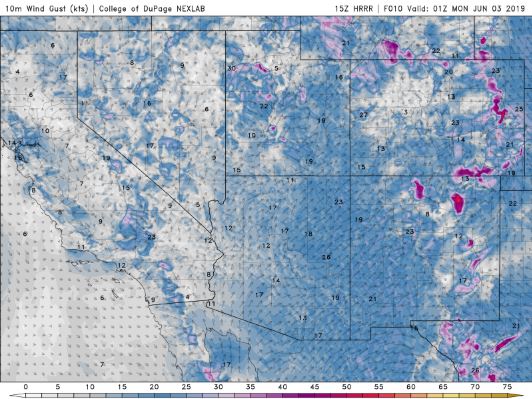 The HRRR predicts that clouds are possible this afternoon, especially near where the storms develop. 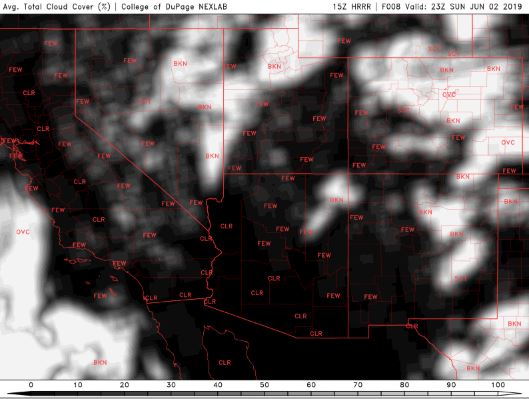 There is a non-zero Supercell Parameter around the central mountain chain for most of the day. 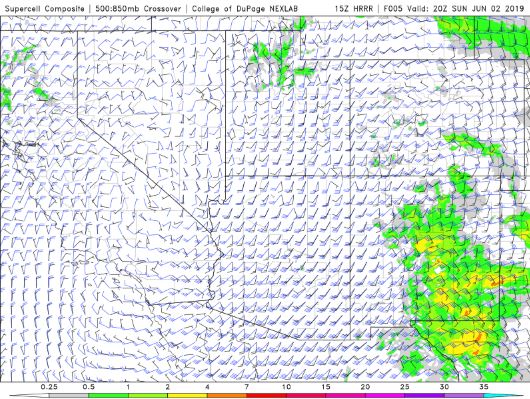 Decisions, decisions.  On one hand, I have so much to do around the house, and very little money.  On the other hand, there are storms that may develop not far from me.  Do I chase them?  I’m still thinking about it.

I know I don’t get paid again for two weeks, and I will need to buy quite a few tanks of gas over the next two weeks.  I also know that I have to be in Magdalena by 7:00 am tomorrow.  I’ll think it over.