Posted on May 2, 2019 by highplainschasing

Hey, today is looking a little better than I expected.  We have another long day ahead of us.

The Storm Prediction Center (SPC) has issued a Slight Risk area today for central Texas, as shown below: 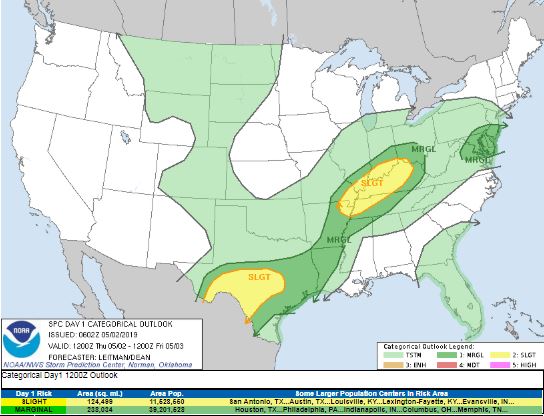 Associated with the Slight Risk is a 5% Tornado Threat Ring: 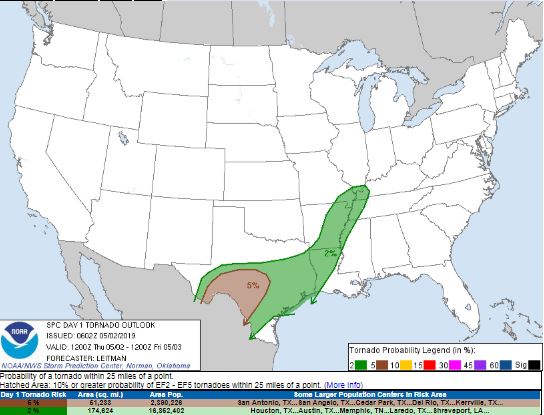 A quick glance at the surface observations shows exactly what I’d want to see on a storm chase day, with the exception of the cloud cover.  Most of Texas is cloudy, but warm and humid.  The dewpoints are in the 60s F, and the winds are streaming in from the Gulf of Mexico.  It is similar to yesterday.  I did sketch in a dryline- notice how the dewpoint drops from 65 F to 18 F in west Texas! 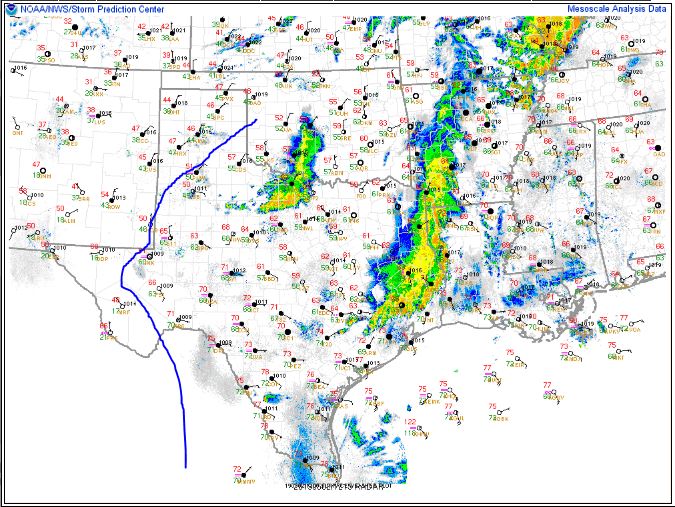 The visible satellite imagery shows that most of Texas is under early-morning cloud cover. 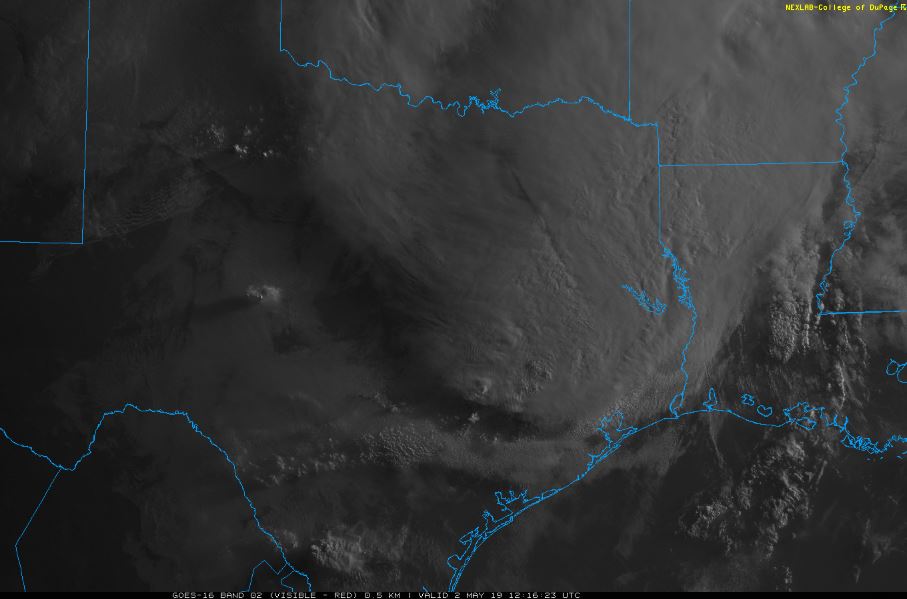 No strong boundaries have shown up on the visible satellite imagery, though it is still early in the morning and there’s only a few visible light scans.  However, on low-level water vapor imagery, two boundaries stand out, which I marked with black lines. 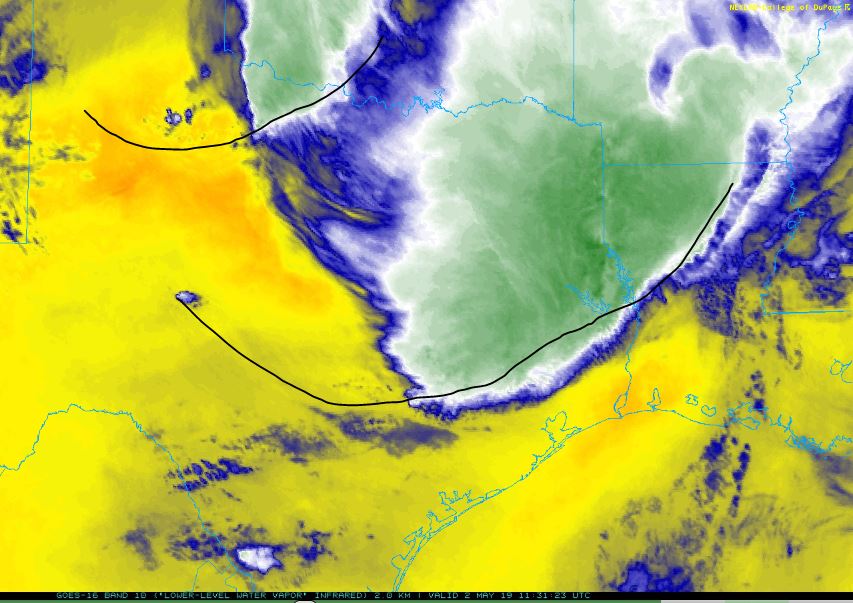 The 12 Z  upper air sounding from Midland/Odessa, TX, shows a much richer atmosphere, with good, 3130 J/kg of Convective Available Potential Energy (CAPE), -140 J/kg of Convective Inhibition (CINH), and a small capping inversion.  The shear, however, is lacking, with only 7 kts of low-level shear and only 25 kts of deep-layer shear available. 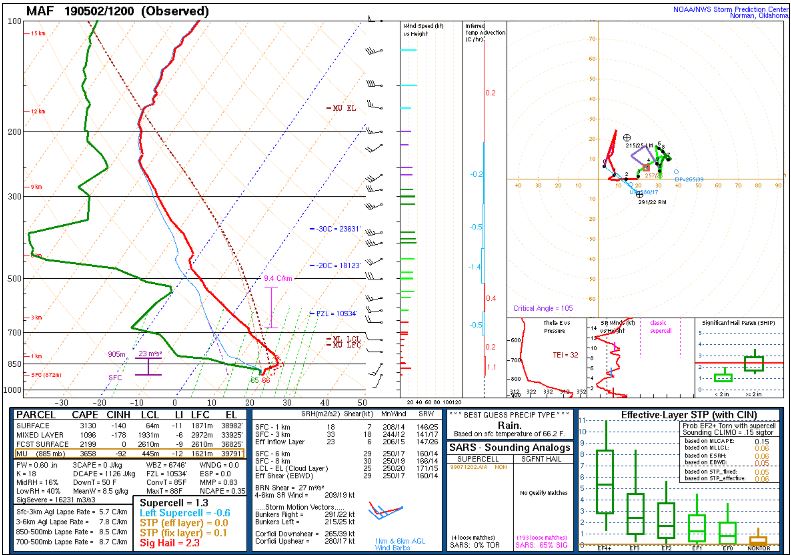 The HRRR Simulated Reflectivity shows cells popping early, with bunches of storms firing by 20 Z.  They seem to cluster quickly, so we’ll have to watch this carefully. 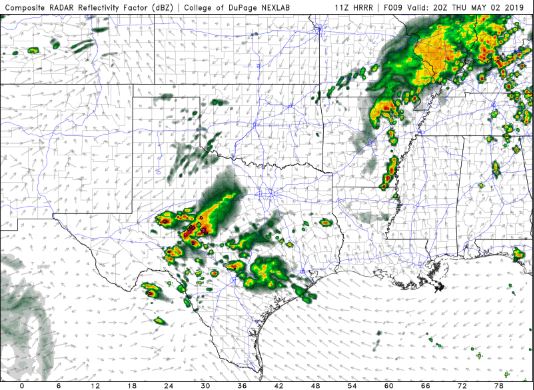 The HRRR Helicity Swaths plot shows a few paths moving to the southeast this afternoon. 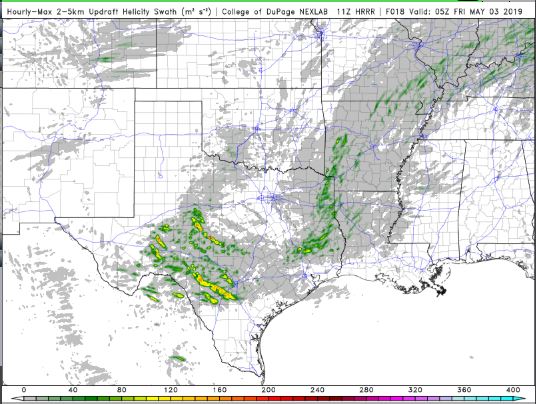 I am targeting a similar area to yesterday, perhaps Garden City, TX.

The biggest problems are that the storms aren’t expected to remain discrete for long.  They want to cluster up quickly, as the shear is low.  Also, the skies are cloudy this morning in Snyder- the satellite imagery doesn’t seem to capture this entirely.  We need to get from under these clouds, either having them mix out or diving south to escape them.

We are meeting at 9 am local time, and that will give the clouds another hour to mix out.  I’m betting they don’t, and I bet we head south, and maybe a little west towards Garden City, Odessa, and Big Spring.

Thank you for reading my post.  I will update as I can.