Posted on March 22, 2019 by highplainschasing

Yesterday was partly sunny, mild and a bit breezy in Magdalena.

This morning has been partly sunny, mild and still in Socorro.

The NWS in Albuquerque, NM, has issued a Hazardous Weather Outlook concerning a slow-moving system that will continue to move out of our area.  There are still a few Winter Weather Advisories in effect, as shown by the NWS Watches and Warnings graphic shown below: 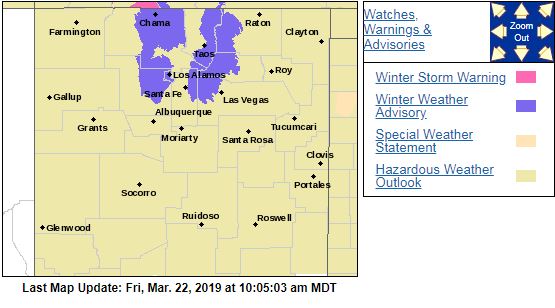 Along these lines, the Storm Prediction Center (SPC) has issued a Marginal Risk for severe weather along the eastern edge of New Mexico today.  There is a Slight Risk over Texas, and believe me, under different circumstances, I would chase after that 5% Tornado Threat ring.  However, here in NM, the likelihood of tornadoes is low today. 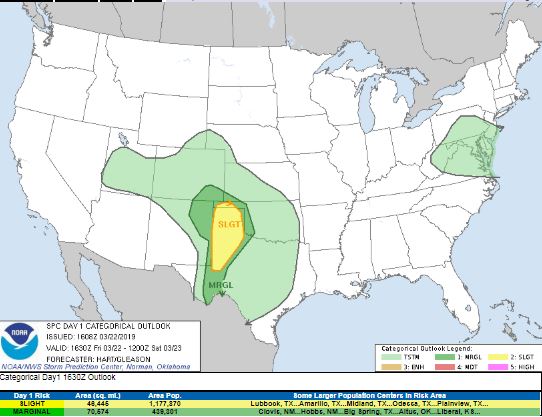 The visible satellite imagery shows a few ongoing showers and thunderstorms in the northeastern part of the state this morning. 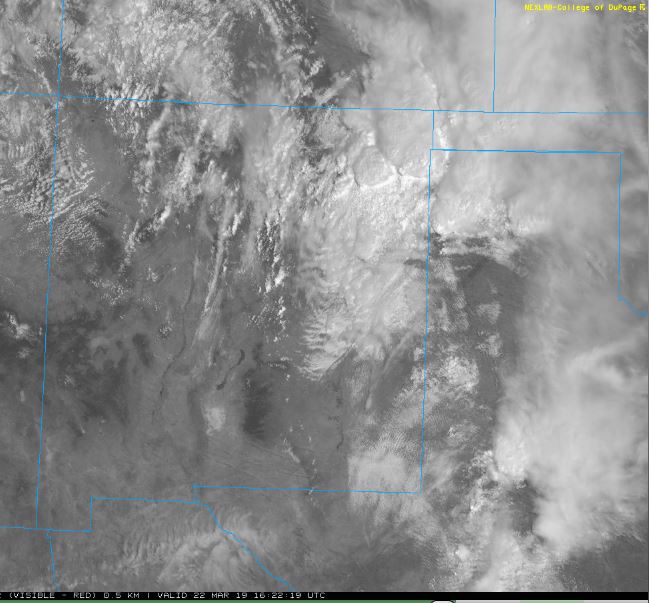 The 12Z upper air sounding from Albuquerque shows a nearly-saturated atmosphere.  There was 0.39 inches of precipitable water present in the column this morning.  There was no Convective Available Potential Energy (CAPE) and no Convective Inhibition (CINH).  The Lifted Condensation Level (LCL) was 539 m.  There was no thermal inversion near the surface and the 0-3 km lapse rate was 6.6 C/km.  The low-level shear was 12 kts (due mostly to direction changes), and the deep-layer shear was 54 kts (due mostly to speed changes). 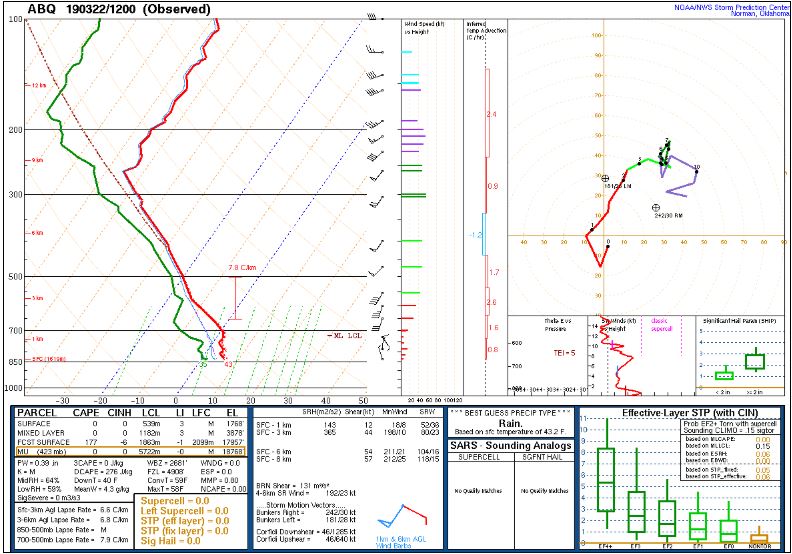 The surface observations chart (from the SPC Mesoscale Analysis Map) shows cool temperatures and high humidity this morning.  The skies are cloudy in the north, and sunny in the south, (according to the sensors) and the winds are light and variable. 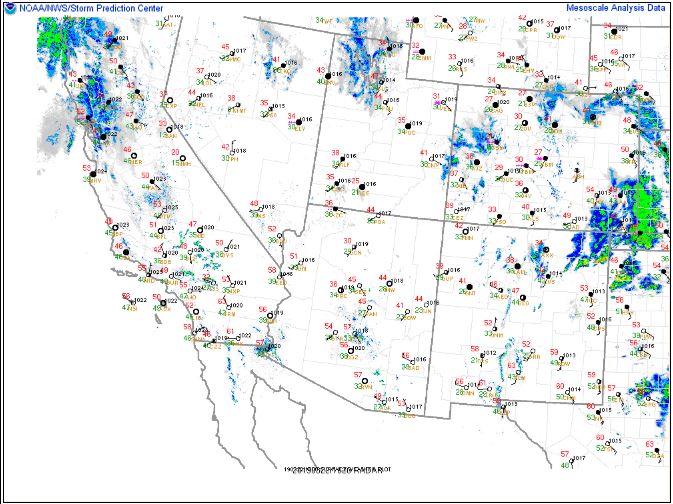 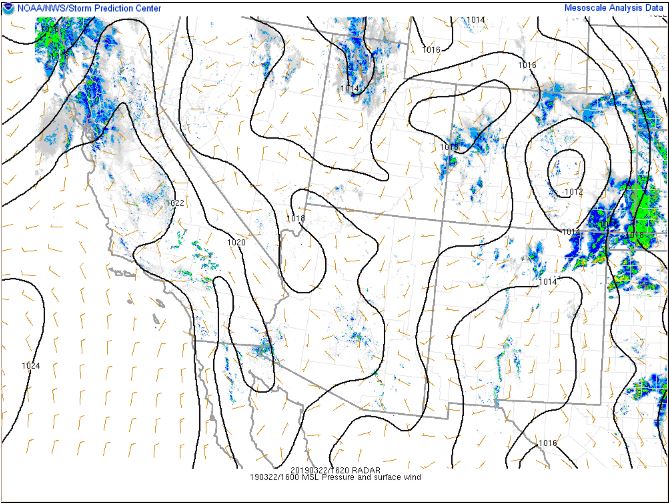 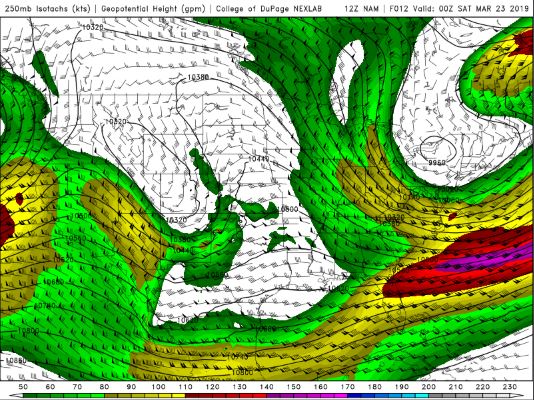 The HRRR simulated reflectivity shows a few storms are possible along the eastern edge of the state. 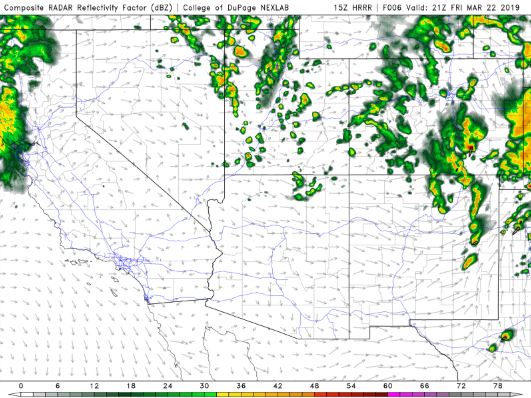 The HRRR predicts that the high temperatures for the middle Rio Grande River Valley will peak in the low 60s F today. 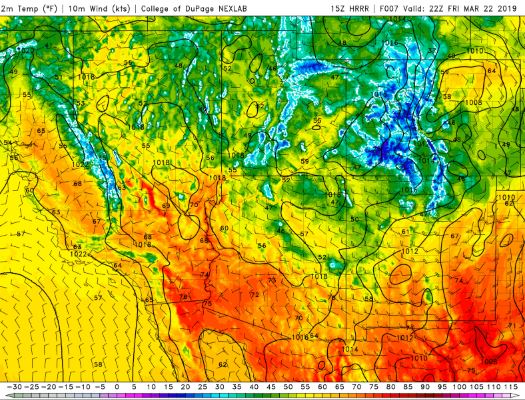 The HRRR shows that the dewpoints will drop by this evening, as the state dries out. 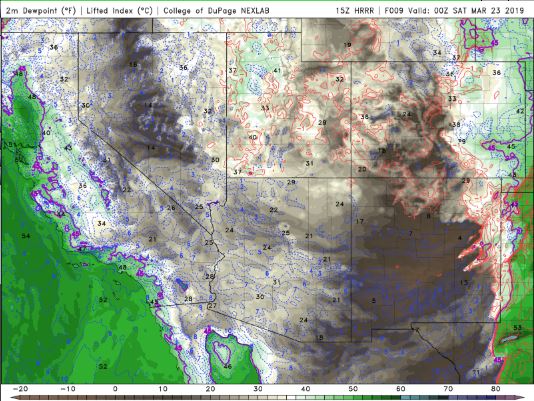 The HRRR shows moderate winds, but nothing to be concerned about.  This chart has been excluded from today’s post.

The HRRR predicts a few patches of clouds by this evening, once the storms have rolled out of the state. 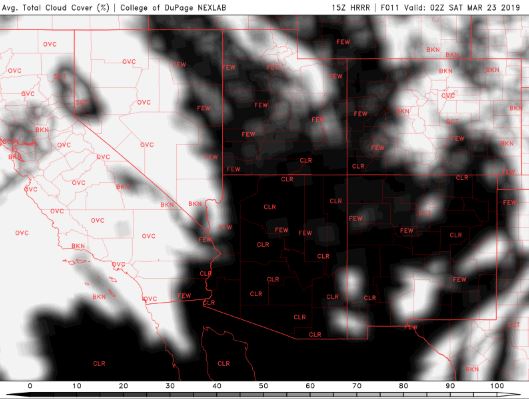 Today is going to be a really nice day to be outside.  It may be a bit breezy in the afternoon, but the temperature and low humidity will be nice.

This blog is about my tales in storm chasing. My name is Seth Price and I am an instrumentation instructor at New Mexico Tech. My amateur radio call sign is N3MRA.
View all posts by highplainschasing →
This entry was posted in Local WX, Practicing Concepts, Predictions, Satellite Imagery and tagged #newmexicotrue, #nmtrue, albuquerque, Belen, Los Lunas, magdalena, Marginal Risk, meteorology, New Mexico, nmwx, rio rancho, Socorro, weather. Bookmark the permalink.