Posted on January 11, 2019 by highplainschasing

Yesterday was mostly cloudy, cool and still.  In the evening, it began to rain, making everything soggy this morning.

This morning has been foggy, rainy, cool, and still.

The NWS in Albuquerque has issued a Dense Fog Advisory for the Rio Grande River Valley until 9 AM.  There is also a Hazardous Weather Outlook in place.  While the rain is expected to stop, another winter storm is expected to pass through tomorrow night and early Sunday morning.  The NWS Watches and Warnings graphic is shown below: 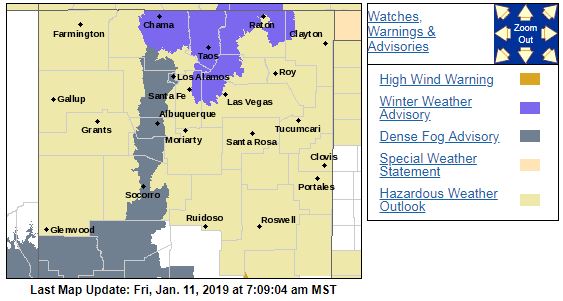 The visible satellite imagery is unavailable at this time.  The enhanced infrared imagery shows the thicker clouds, and thus the precipitation, are moving east into the Texas Panhandle. 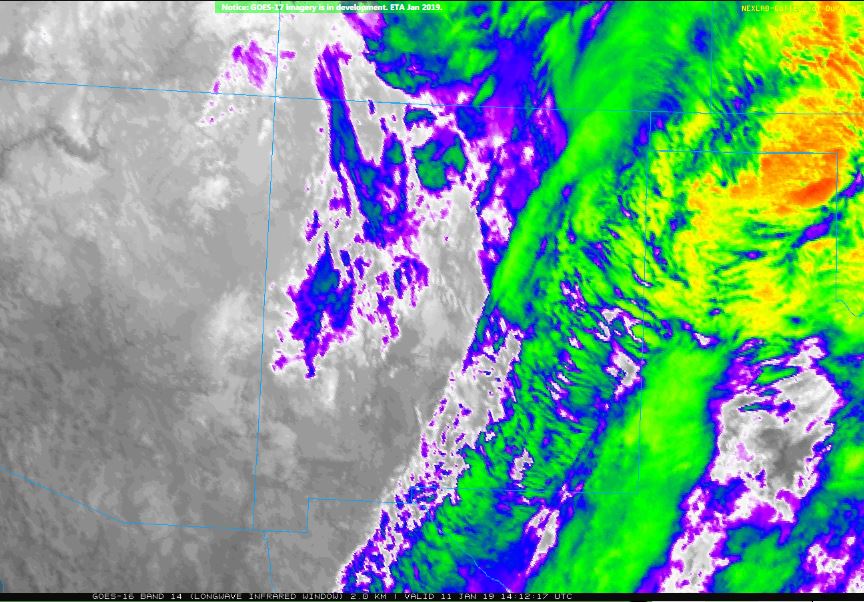 The 12Z upper air sounding from Albuquerque shows a saturated atmosphere below 500 mb.  There was 0.48 inches of precipitable water present in the column.  There was no Convective Available Potential Energy (CAPE) and no Convective Inhibition (CINH).  The Lifted Condensation Level (LCL) was 13 m.  There was no thermal inversion near the surface, and the 0-3 km average lapse rate was 5.4 C/km.  The hodograph shows that there was 21 kts low-level shear (due mostly to directional changes) and 52 kts deep-layer shear (due mostly to speed changes). 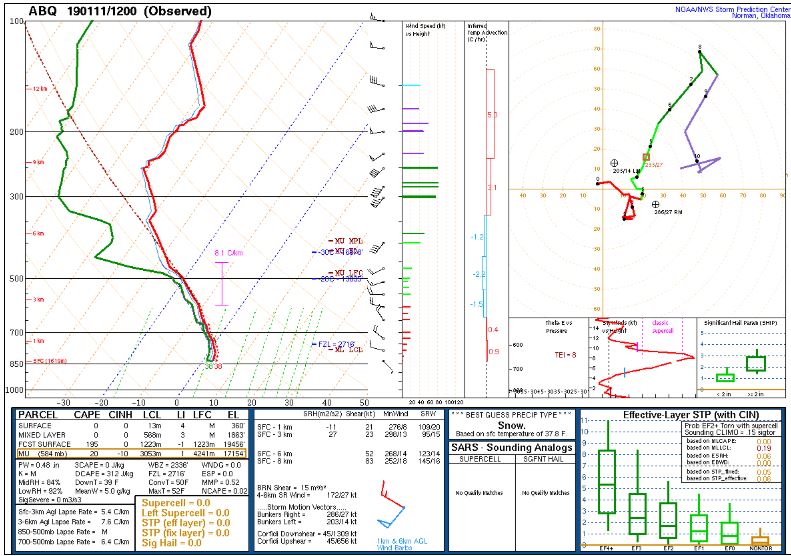 The surface observations (from the SPC Mesoscale Analysis Map) show cold temperatures and high humidity (based on the surface dewpoint depressions).  The skies are cloudy (according to the sensors), and the winds are light and variable. 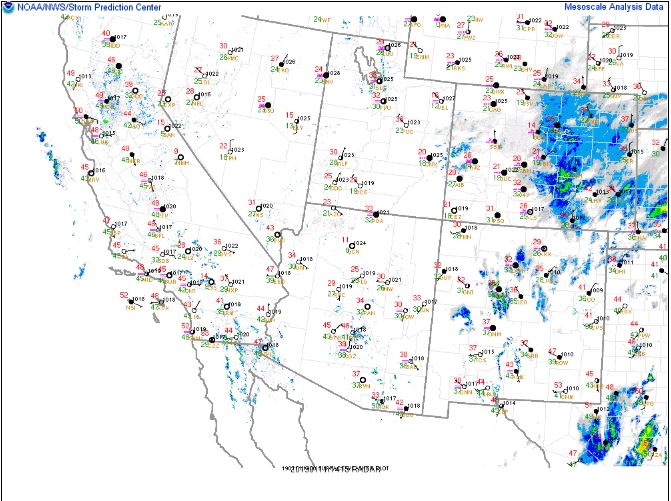 The surface pressure chart shows that we are under no strong pressure systems or gradients this morning.  The RAP shows none are expected to develop in the next six hours. 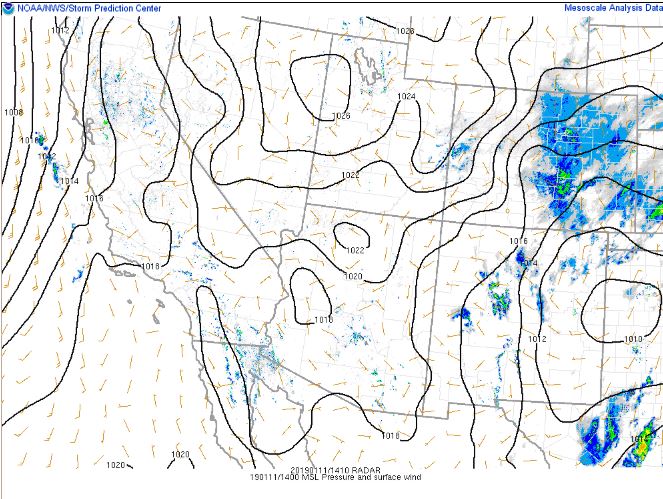 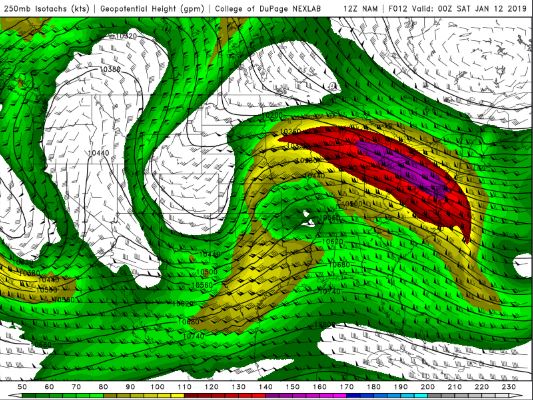 The NAM 850 mb chart shows no significant thermal advection.  This chart has been excluded from today’s post.

The HRRR simulated reflectivity shows some precipitation is possible today.  The form of this precipitation is mostly rain, though snow will be likely at higher elevations and in the northern third of the state. 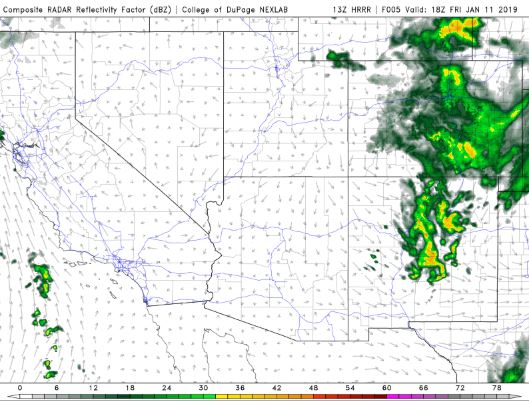 The HRRR predicts that the high temperatures for the Rio Grande River Valley will peak around 22 Z, reaching into the upper 40s F. 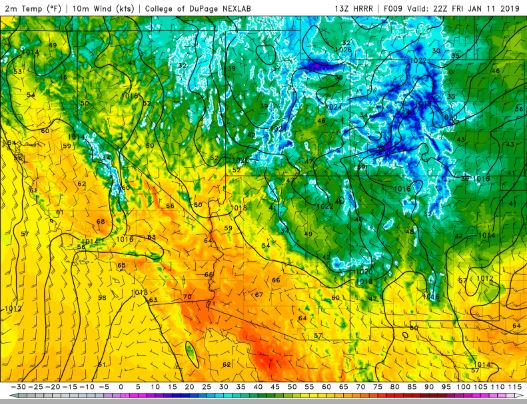 The HRRR shows that the the dewpoints will reach the upper 30s F. 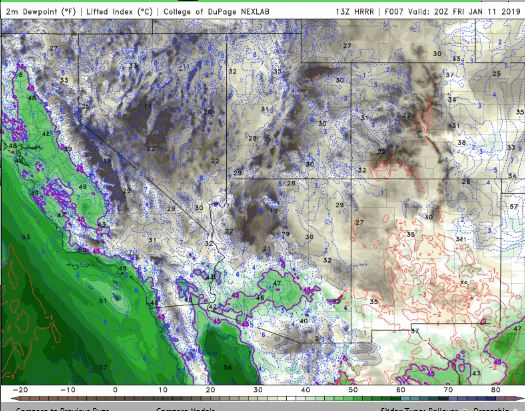 The HRRR shows strong wind gusts are unlikely today.  This chart has been excluded from today’s post.

The HRRR shows that skies will clear this evening, but only as a the space between winter storms. 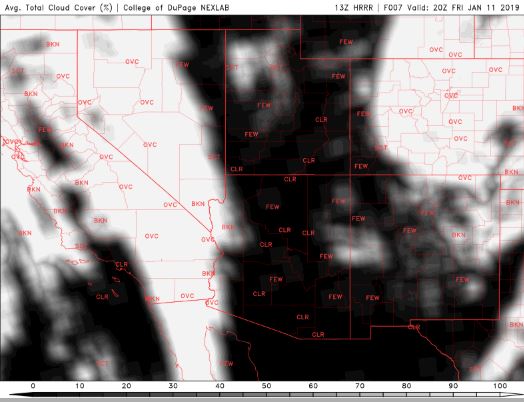 We are in a brutal pattern, with a winter storm every weekend.  Hopefully, all of this moisture will help alleviate the drought in parts of the state, and maybe even save a few of my trees.