Posted on June 10, 2018 by highplainschasing

Yesterday was hot, but I did run into a few rain showers south of Capitan, NM.

This morning has been sunny, hot and breezy.  It feels like fire weather out there.  I’m off to a late start with my forecast.  I was going to go for a bike ride this morning, but it was already in the 70’s at 6 am, so I decided not to bother.  Too hot.

The NWS in Albuquerque, NM, has issued Red Flag Warnings for the northwestern corner of the state, as well as Hazardous Weather Outlooks for the rest of their warning area.  These concern the windy, fire weather conditions.  The NWS Watches and Warnings graphic is shown below: 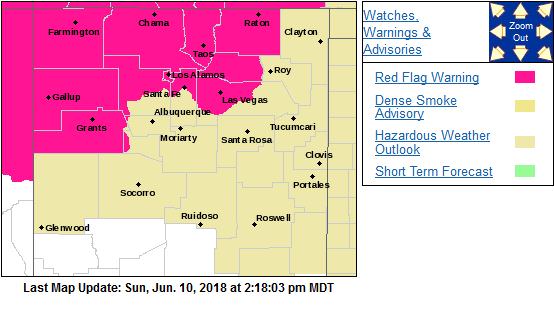 The Storm Prediction Center (SPC) has issued a Critical Fire Weather risk area for the northwestern part of the state today. 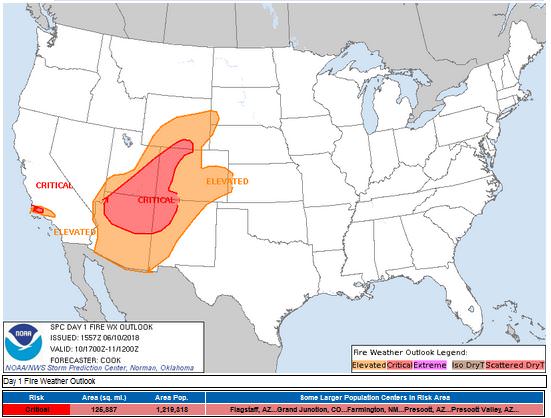 The visible satellite image shows dry, clear conditions over the western half of the state, with a few cumulus clouds forming over the eastern half.  At the dryline (right along the TX border), a few storms have formed. 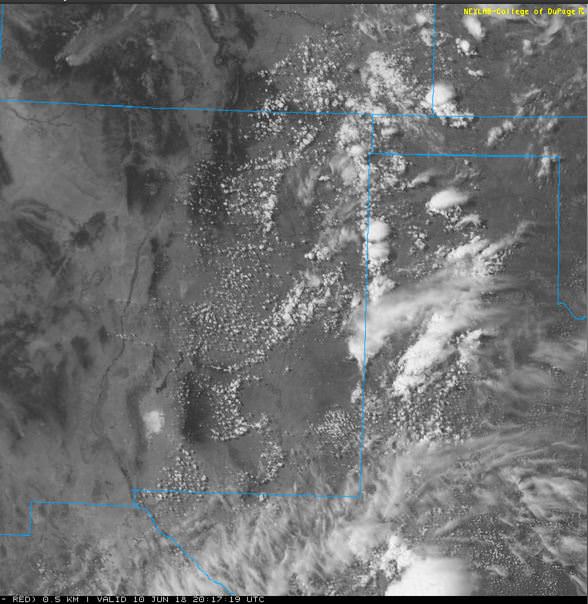 The 12Z upper air sounding from Albuquerque shows a sounding with nearly saturated conditions aloft, but very little surface moisture.   There was 0.74 inches of precipitable water present in the column.  There was no Convective Available Potential Energy (CAPE) and no Convective Inhibition (CINH).  The Lifted Condensation Level (LCL) was 2978 m.  There was a moderate thermal inversion near the surface, and the 0-3 km average lapse rate was 8.7 C/km. 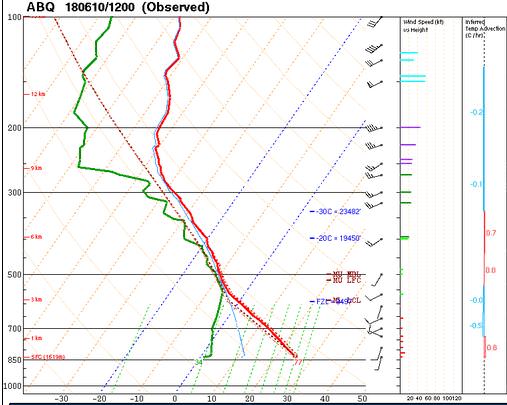 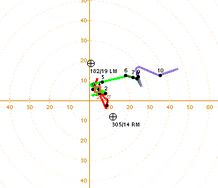 The surface observations (from the SPC Mesoscale Analysis Map) shows high temperatures, low humidity (as shown by the dewpoint depressions), and moderate surface winds under clear skies for most of the state. 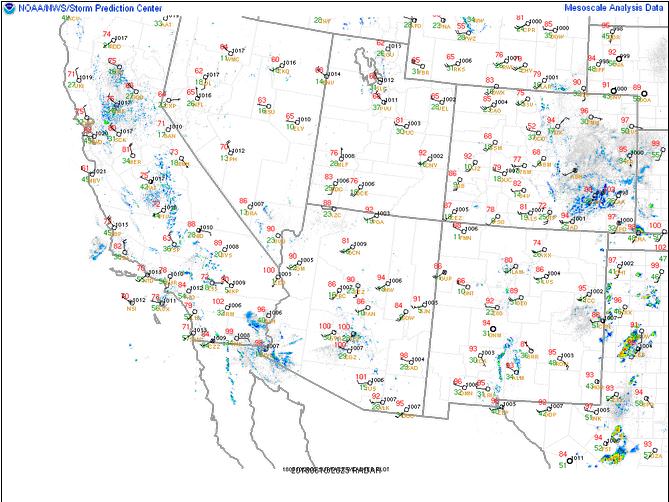 The surface pressure chart shows that we are under a large thermal low that will continue to deepen over the next six hours, according to the RAP.  Winds are strong due to upper-level events, not because a strong surface pressure difference. 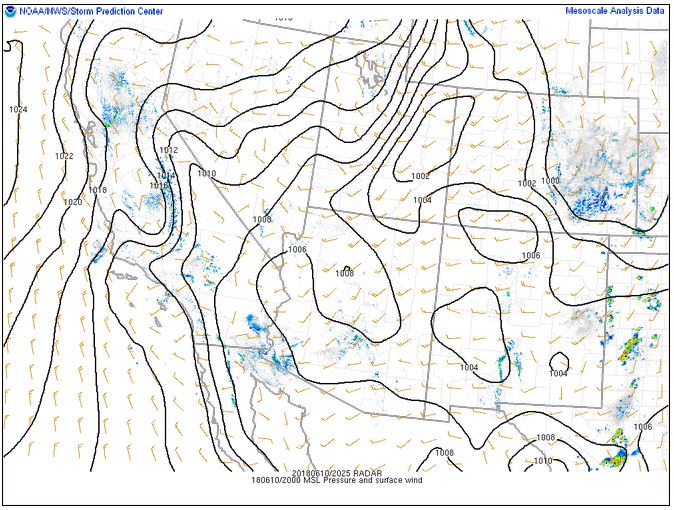 The NAM 250 mb chart shows a change in the upper-level winds as a slight heat ridge forms over western New Mexico and eastern Arizona.  The winds shift from nearly zonal, becoming from the northwest. 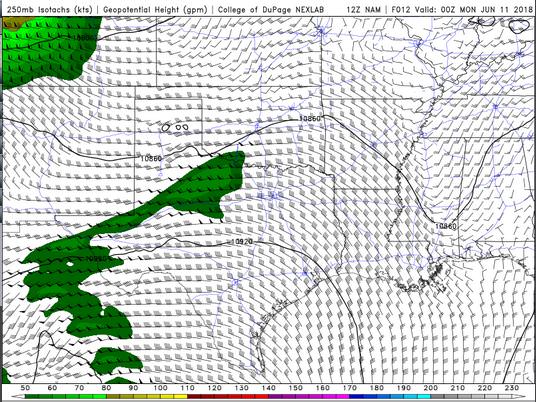 The HRRR simulated reflectivity shows that a few storms may develop along the dryline in the late afternoon at the eastern edge of the state.  Otherwise, precipitation is not expected. 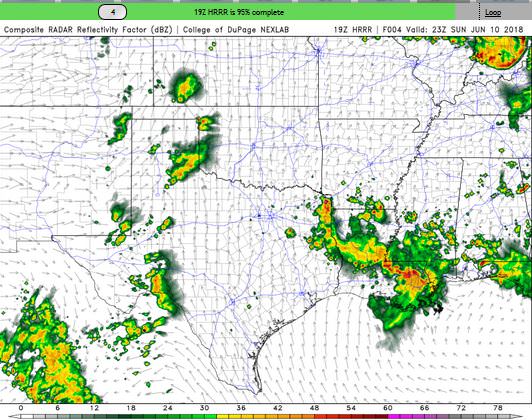 The HRRR predicts that the high temperatures for the Rio Grande River Valley will peak around 22 Z, reaching into the mid-90’s. 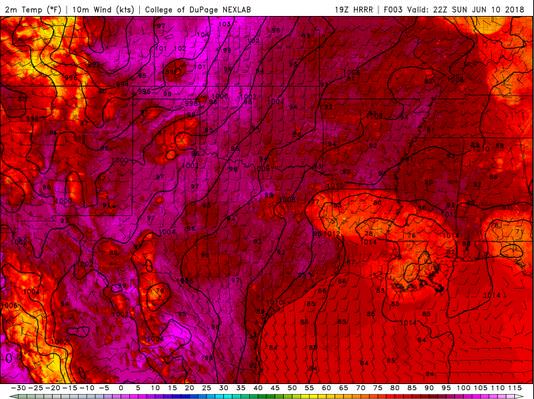 The HRRR shows that the winds will remain moderate throughout the day, with mid-teens gusts expected.  This image has been excluded from today’s post.

The HRRR shows that the skies will mostly clear throughout the day.  This image has been excluded from today’s post.

The SPC Mesoscale Analysis Map shows that the Fosberg Index will be highest in the northwestern corner of New Mexico today.  This is where we have the greatest risk of wildfires. 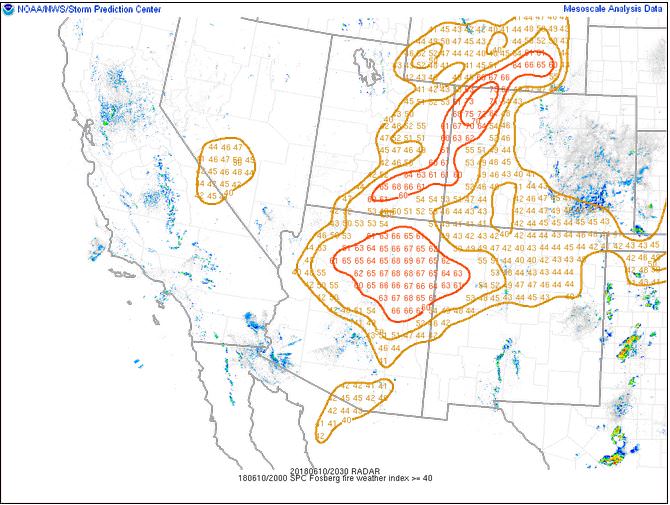 Today will be hot, yet again.  Unlike yesterday, brief showers and clouds will not provide any relief.  The northwestern corner of the state is particularly vulnerable to wildfires today, given the breezy, dry conditions.