Posted on June 1, 2018 by highplainschasing

Day 13 began in Dumas.  I started out the day by going for a run around town at first light.  Dumas is a pretty Texas town, complete with brick buildings and a grain dryer in the downtown area.

We attended the morning forecast meeting with Virginia Tech.  There was a threat in New Mexico, but the Day 2 threat was in Colorado and Wyoming.  The Hokies decided they would go for the Colorado threat, and drift north.  Being a lighter crew, we opted to do both- chase the New Mexico threat, then the Colorado threat for Day 14.

The Storm Prediction Center (SPC) had issued a Marginal Risk for both Colorado and New Mexico. 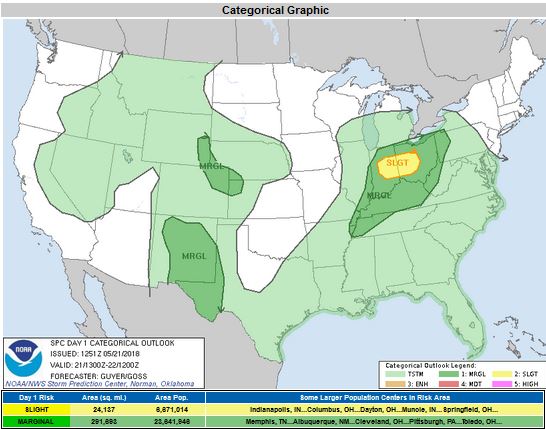 However, there was a 2% Tornado Threat Ring for southern New Mexico, and not Colorado. 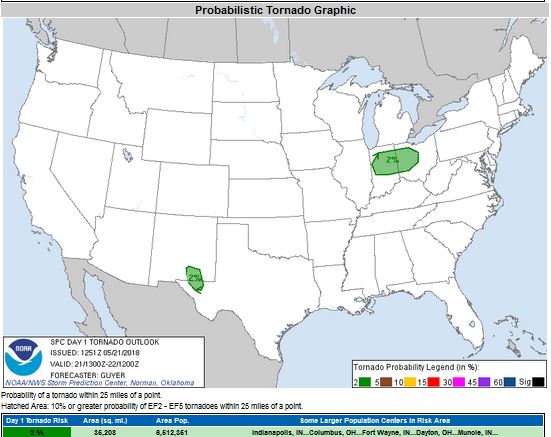 Considering we were a crew of four and VT was a crew of 18, we could make it to both the threat in NM on Day 13, and CO on Day 14, but they could not.  We parted ways at Dumas and headed southwest.

We stopped at the NM line, as Raegan had never been to NM.  We took a photo and continued south to Roswell.  Once in Roswell, we met up with Mike Olbinski and his crew for a bit, before heading northwest after a few cells that had fired as they moved off the mountains.

The cell produced a ragged wall cloud to start.  I did not do a very good job of capturing it with my camera.  I spent quite a bit of time reviewing our awful road network in limited data coverage instead. 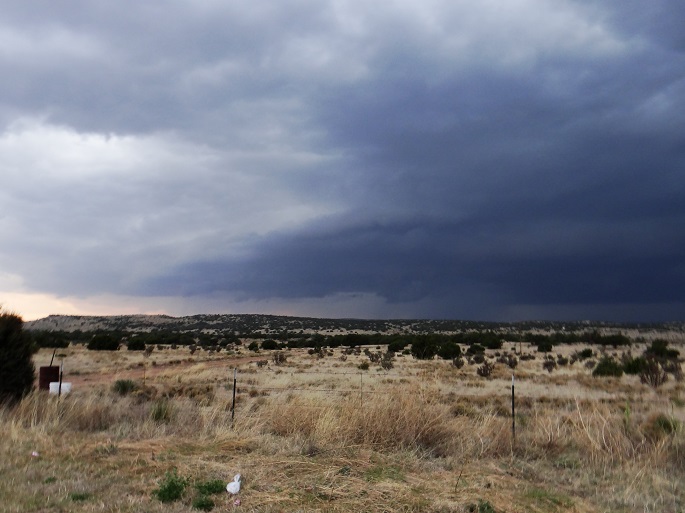 We met the Mississippi State crew at a gas station briefly.  Ironically, they also had a reporter from New York City traveling with them, so that was fun.

We moved south a bit and took a few more photos, though we quickly ran out of daylight. 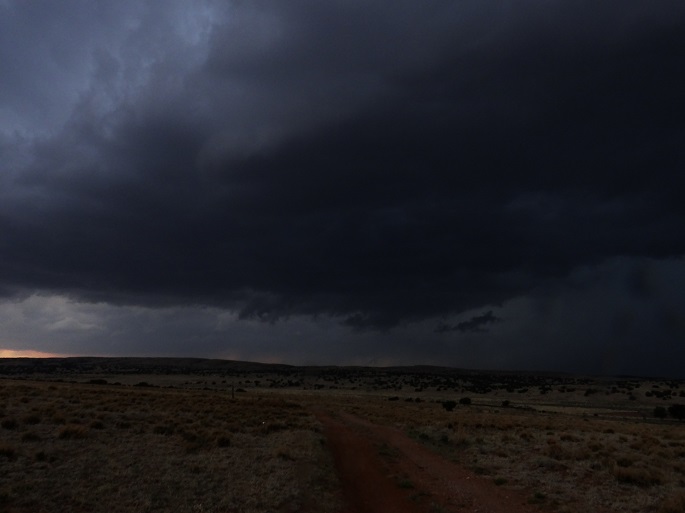 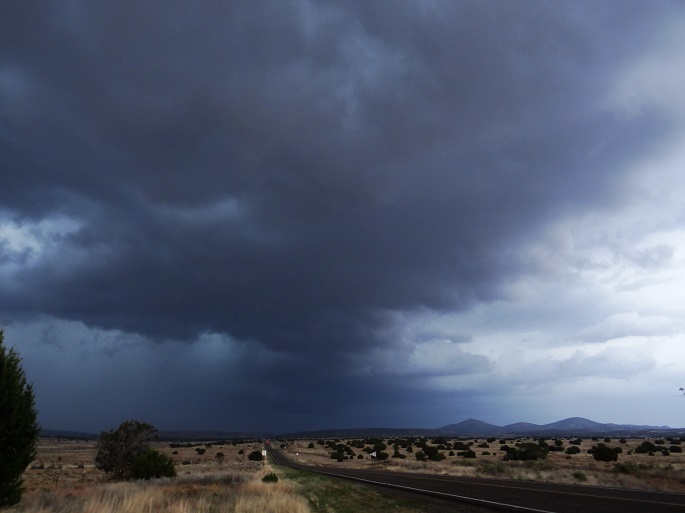 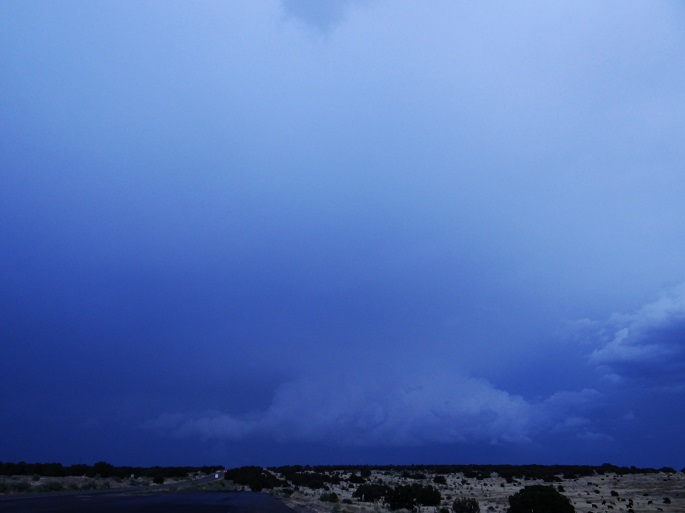 We took a quick group selfie in front of the wall cloud. 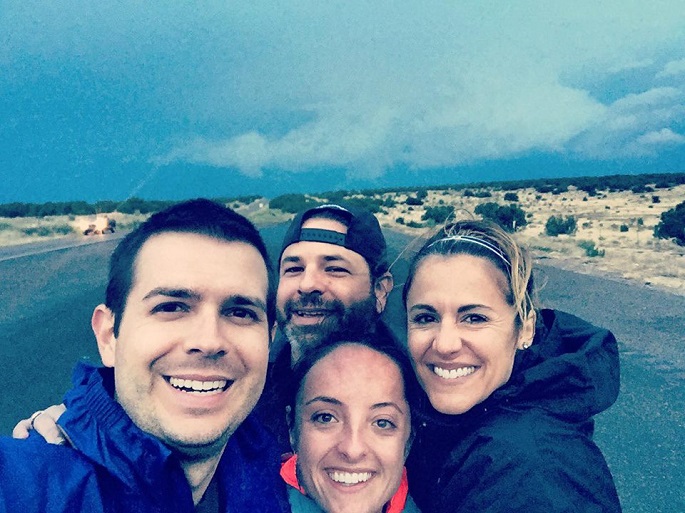 Soon after the selfie was taken, Raegan says, “Hey, what is that?”  Sure enough, it was a low contrast tornado, just after dusk.  I could not get a decent photo of it, but other chasers confirmed its existence.

Seeing as it was after dark, we decided not to pursue the storm.  We waited for it to pass, an then crossed through the hail track along US-54. 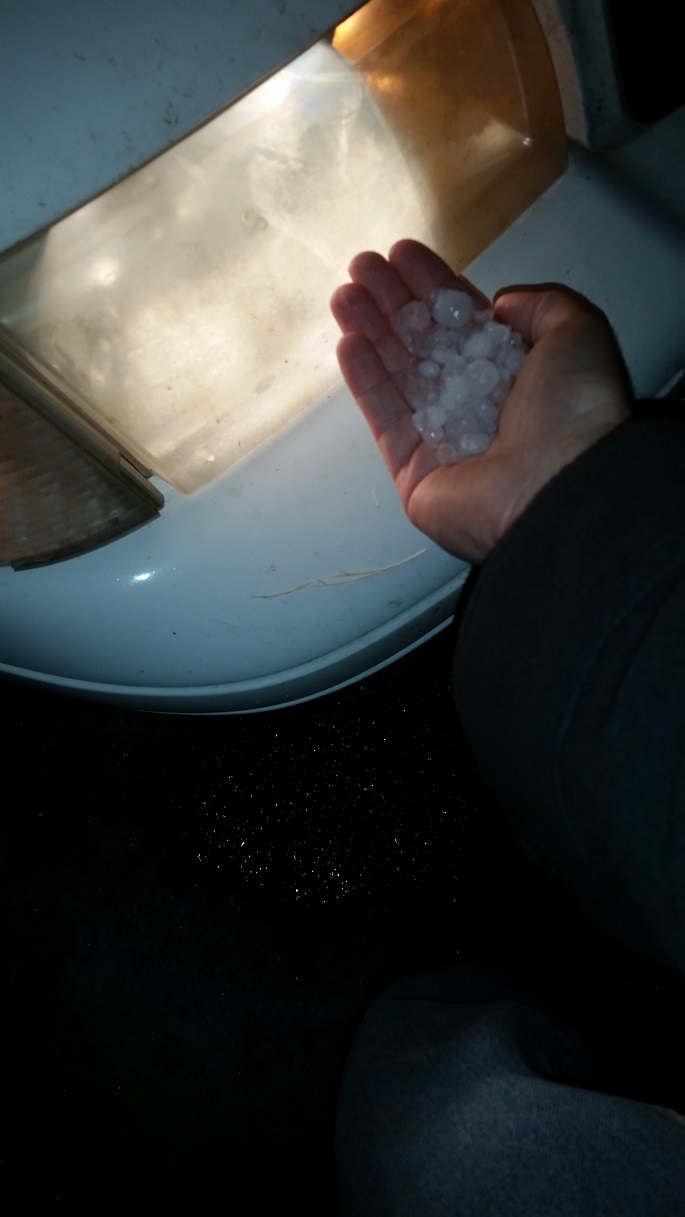 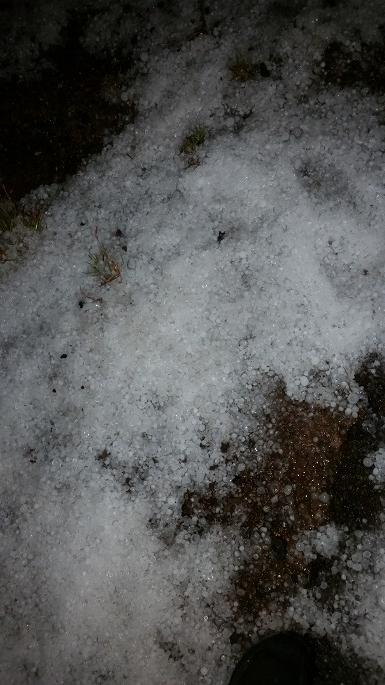 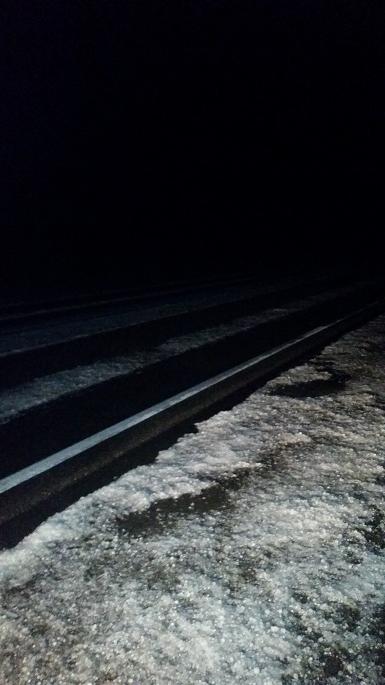 Raegan snapped a candid photo of me, soon after hitting Kathryn with a hail ball.  I’m lucky to be alive. 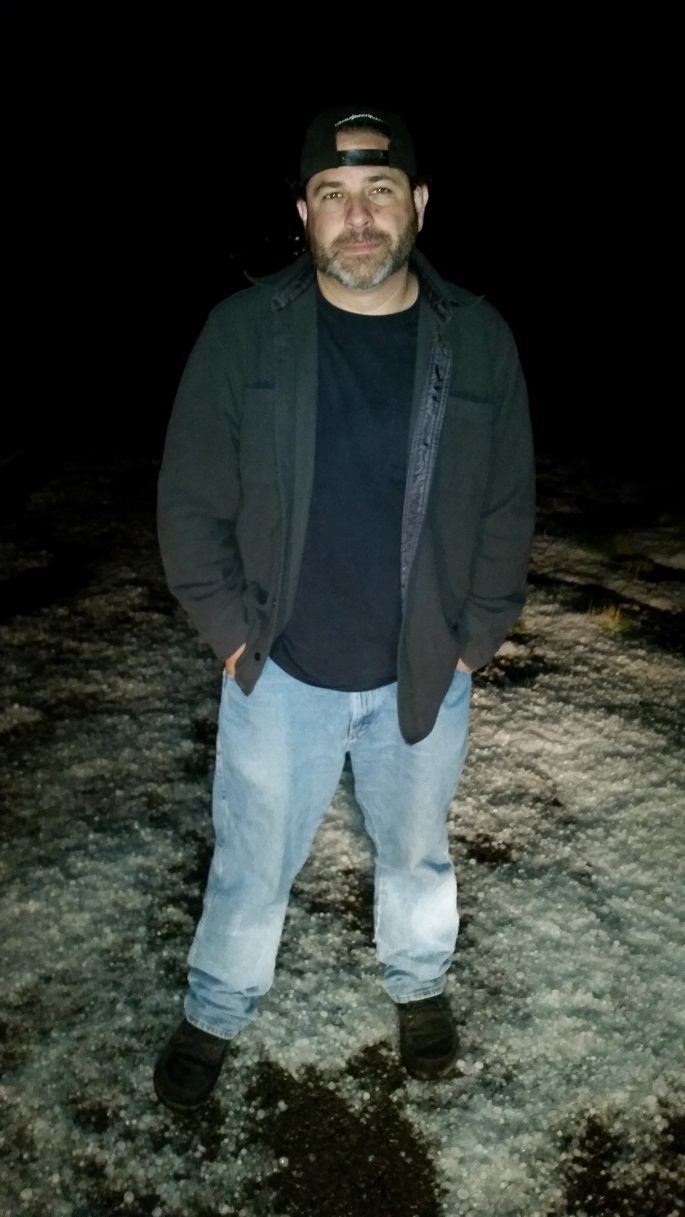 After our hail encounter, we continued north.  Soon after we left Corona, I started to accelerate to get out of town.  A deer stood in the distance, and I started to brake.  However, the doe sitting in the grass 50 yards closer decided to get up and jumped directly in front of me, and I hit her.   She took off running, and we never did find her.

Damage to the car was minimal:  Front clip, grill and a popped headlight bulb.  The headlight lenses are probably cracked as well. 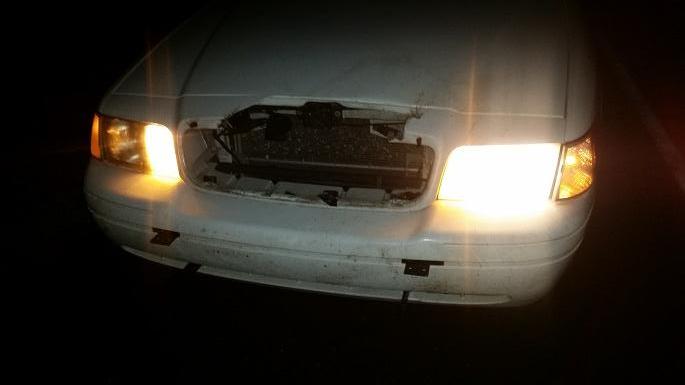 We called the police, but they were two hours away, and considering we were uninjured, still running, and there was no animal on the road, we went on our way, ending the day in Las Vegas, NM. 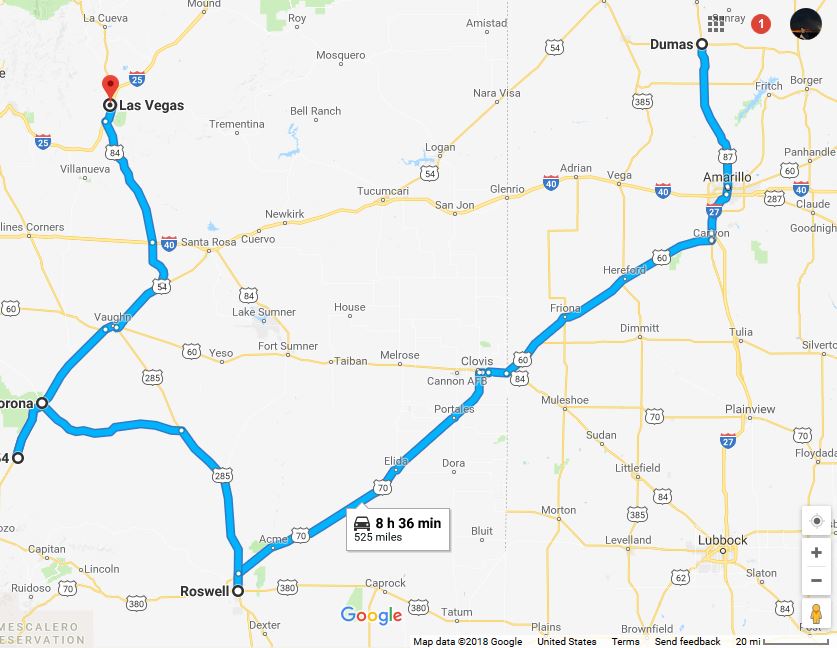 Here are the Storm Reports from the day: 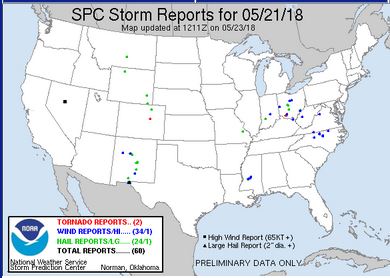 This blog is about my tales in storm chasing. My name is Seth Price and I am an instrumentation instructor at New Mexico Tech. My amateur radio call sign is N3MRA.
View all posts by highplainschasing →
This entry was posted in Chase Account, Chase Crew and tagged 2% tornado threat ring, deer, Marginal Risk, meteorology, New Mexico, nmwx, storm chasing, tornado, weather. Bookmark the permalink.