Posted on March 11, 2018 by highplainschasing

Yesterday was mostly sunny, warm and windy in Deming.  The wind damaged our tent at the Deming Gem and Mineral show, so we packed up early.

This morning has been overcast, cool and still.  I did go out for an early morning run.

The visible satellite image shows that most of the state is under heavy cloud cover this morning. 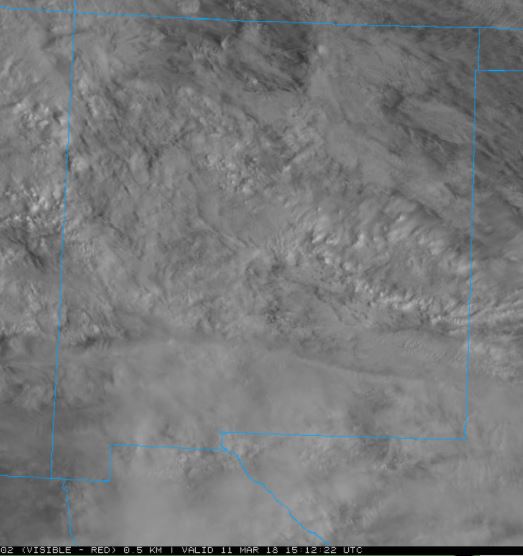 The infrared satellite image shows a thick blanket of stratus clouds covering the state this morning, most with low, warm tops. 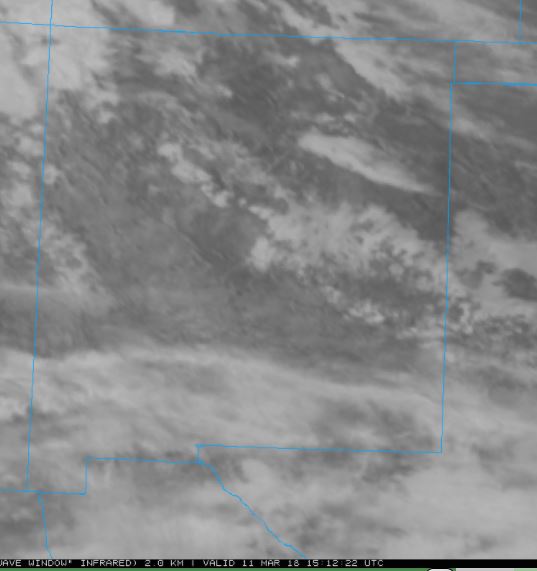 The enhanced low-level water vapor satellite imagery shows that moisture has returned and mixed through the layers this morning.  Our fire danger has decreased this morning. 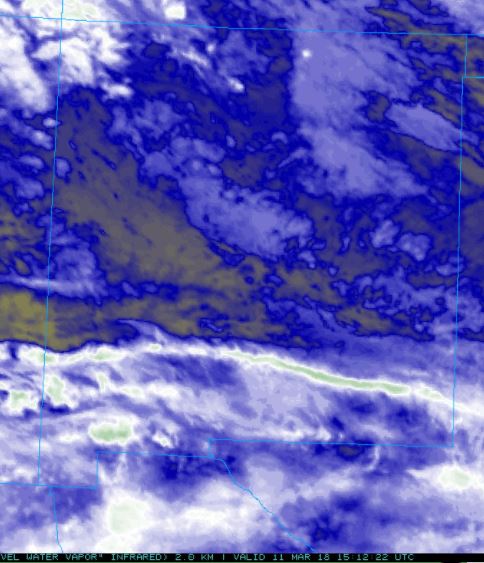 The 12Z upper air sounding from El Paso shows a nearly-saturated atmosphere, with some drier air in the boundary layer.  There was 0.80 inches of precipitable water present in the column.  There was no Convective Available Potential Energy (CAPE) and no Convective Inhibition (CINH).  The Lifted Condensation Level (LCL) was 1382 m.  There was no thermal inversion near the surface, and the 0-3 km average lapse rate was 6.7 C/km. 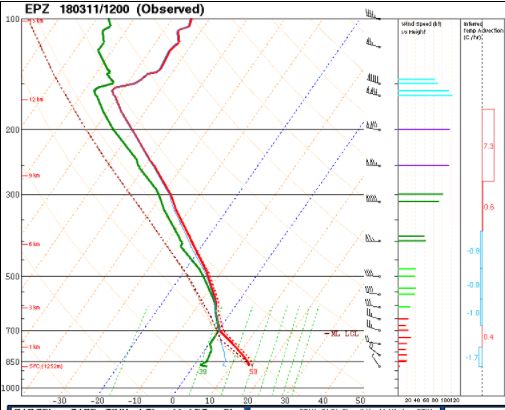 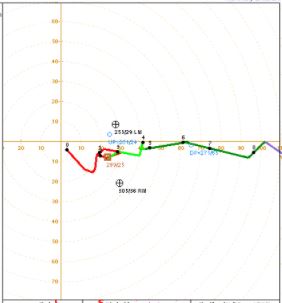 The surface observations (from the SPC Mesoscale Analysis Map) show cool temperatures and moderate humidity (based on the surface dewpoint depressions).  The skies are cloudy (according to the sensors), and the winds are light and variable this morning.  The Doppler RADAR shows rain falling in a few patches. 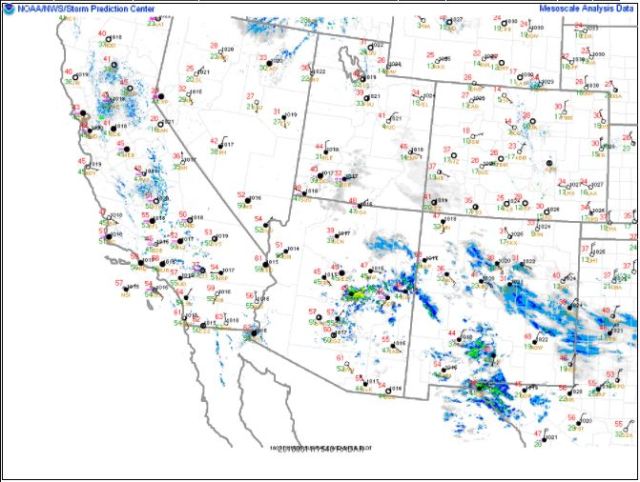 The surface pressure chart shows slightly higher pressure and a slight pressure gradient across the state this morning.  The RAP shows that this trend will continue for at least the next six hours. 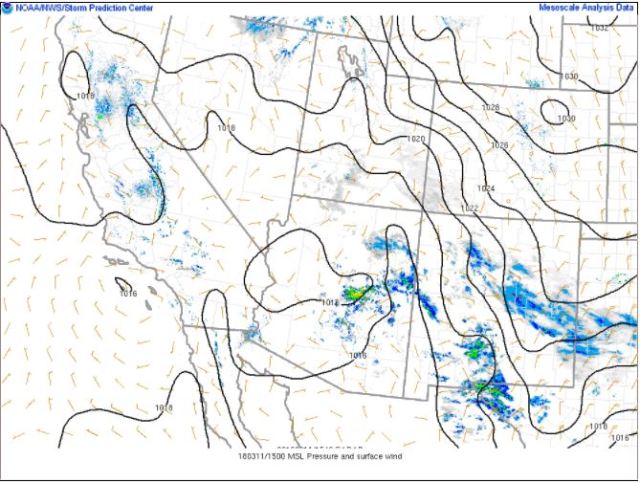 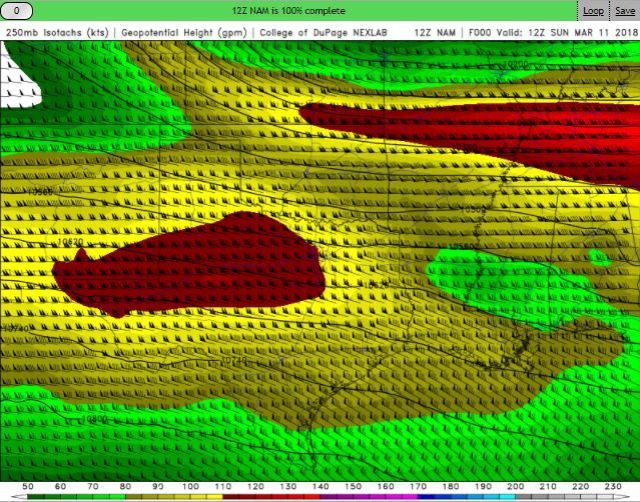 The HRRR simulated reflectivity shows that precipitation is likely throughout most of the day. 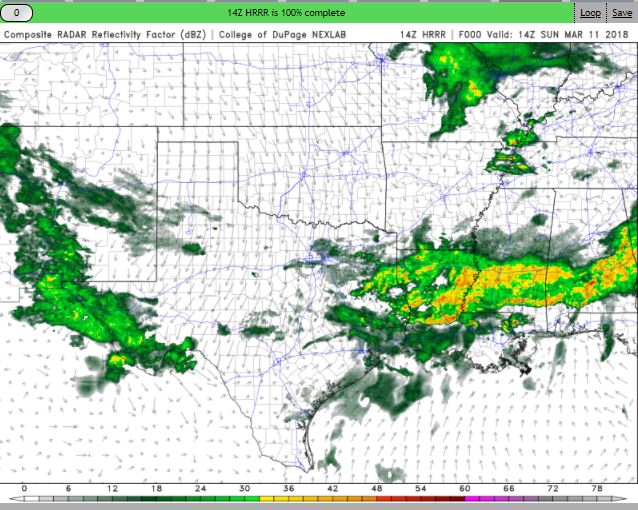 The HRRR predicts that the high temperatures will reach into the mid-50’s today, peaking at around 20 Z.  It will be much colder today as compared to yesterday.

The HRRR shows that the wind speeds will be strong, but consistent.  Even so, this chart has been excluded from today’s post.

The HRRR shows that the skies will become overcast all day. 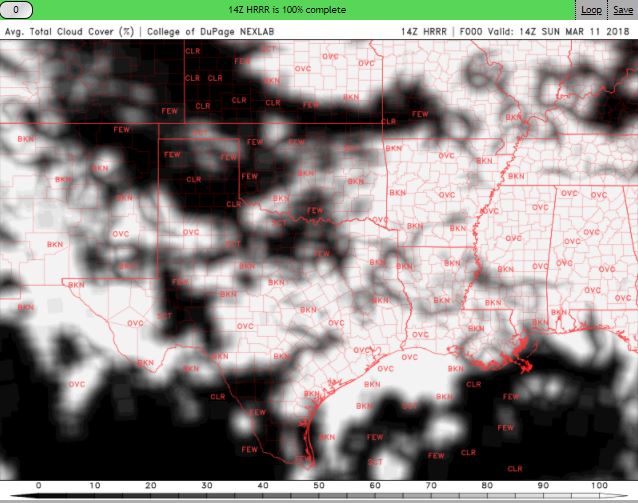 Today will be an unpleasant day in southwestern New Mexico.  It will be cool, cloudy, and rainy.  We aren’t spending any more time at the outdoor rock show, or outdoors in general.

This blog is about my tales in storm chasing. My name is Seth Price and I am an instrumentation instructor at New Mexico Tech. My amateur radio call sign is N3MRA.
View all posts by highplainschasing →
This entry was posted in Local WX, Practicing Concepts, Predictions, Satellite Imagery and tagged albuquerque, Deming, forecast, Las Cruces, Lordsburg, meteorology, New Mexico, nmwx, Silver City, weather. Bookmark the permalink.