Posted on June 27, 2017 by highplainschasing

Yesterday started with a few messages from my friend and fellow storm chaser, Dan Nelson, WX4ICE.  He asked if I was going to chase the Enhanced Risk in New Mexico.  After breakfast, I evaluated the threat myself.

The Storm Prediction Center (SPC) Risk area is shown below: 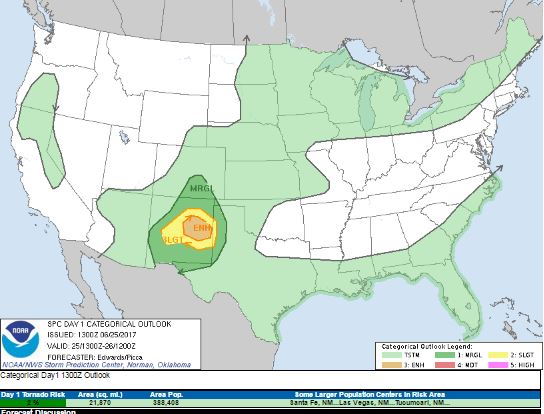 Associated with this risk was a 2% Tornado Threat Ring: 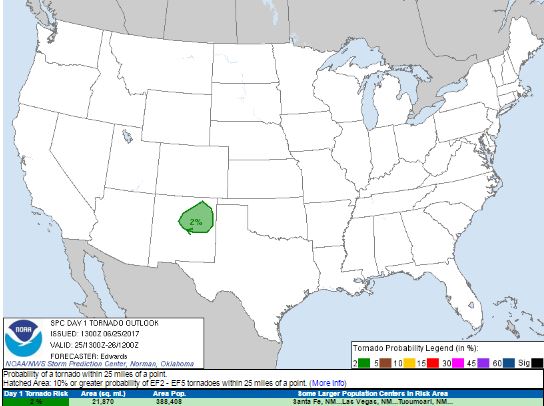 With that, we packed up at the Field Day site and drove to Rio Rancho to pick up Joey.  A few minutes later, we were on the road to Las Vegas, NM.

While there were several tornado-warned cells, no tornadoes were reported in New Mexico, per the SPC: 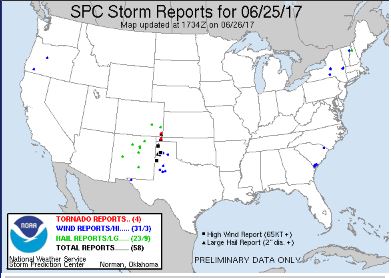 At Las Vegas, I stopped and took a few photos of the approaching storm.  Unfortunately, we were looking directly into the precipitation core from here, and couldn’t see the base. 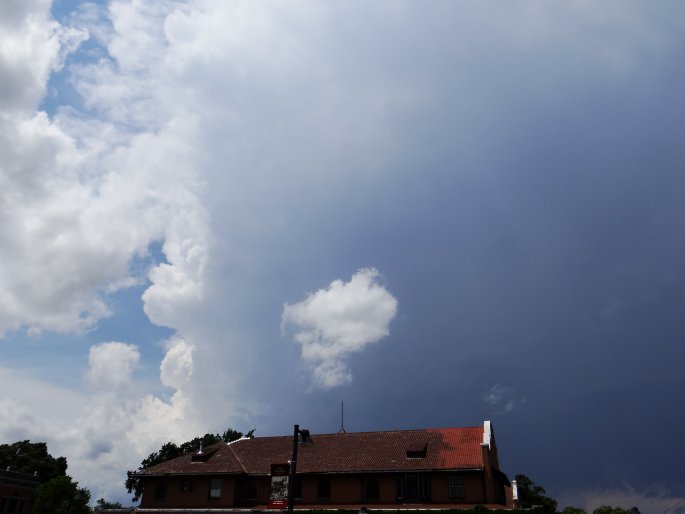 We continued north along I-25 for a few more miles, exiting at 352 and driving west a hundred yards or so.  From here, we could see the base of the storm, as well as the precipitation core. 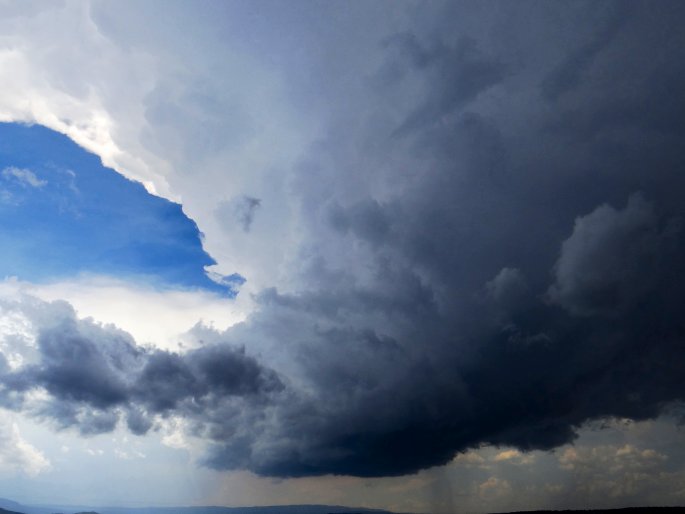 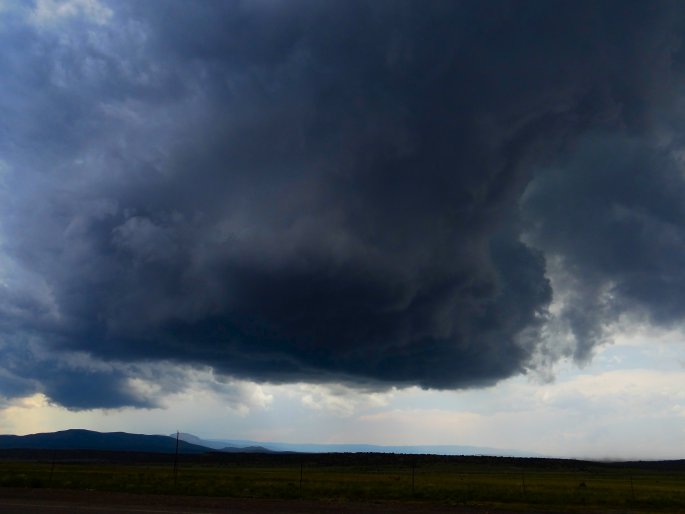 There was another storm firing to our north, near Springer and Wagon Mound.  This one went tornado-warned, though no tornado was spotted.

Our storm tightened up its rotation, though we never saw a real wall cloud form.  On RADAR though, it showed some rotation.  We are the red dot closest to the storm: 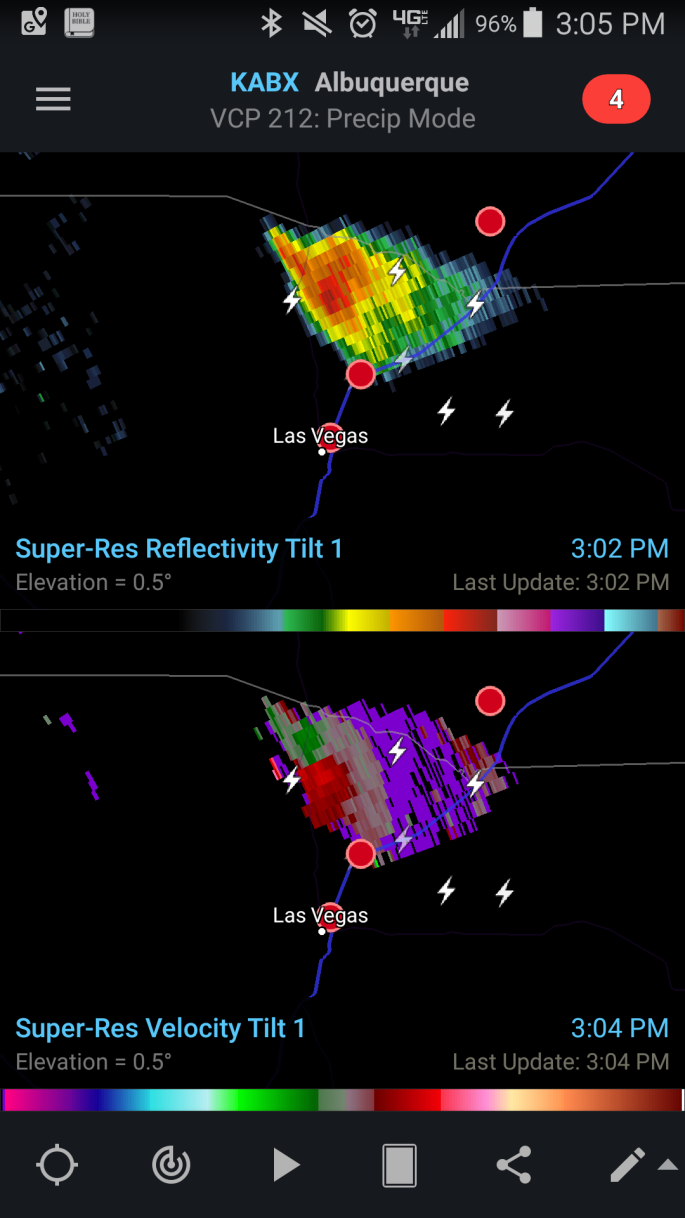 We started to see some BB to pea-sized hail.  Just an occasional one or two.  Then, there was a few golf balls that exploded in the road. The storm became severe-warned a few seconds after we saw our first larger hailstone.  One hit dead center of the roof of the car, and sent shards of ice off both sides (we had our windows open at the time).  We are, once again, the red dot nearest the storm.  The Vertically Integrated Liquid (VIL) showed stronger reflectivites a few minutes after this image (when we had the larger hail): 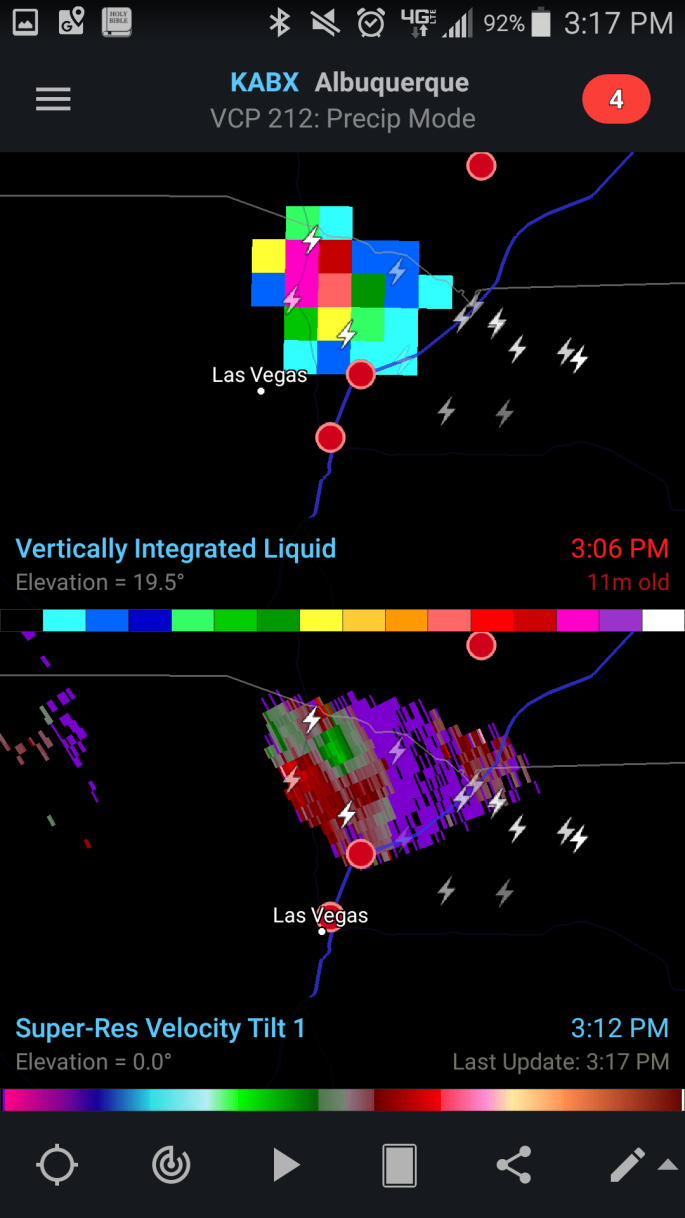 Notice the tighter rotation and the stronger VIL signature in this image.  Also, notice that the storm is now severe-warned. 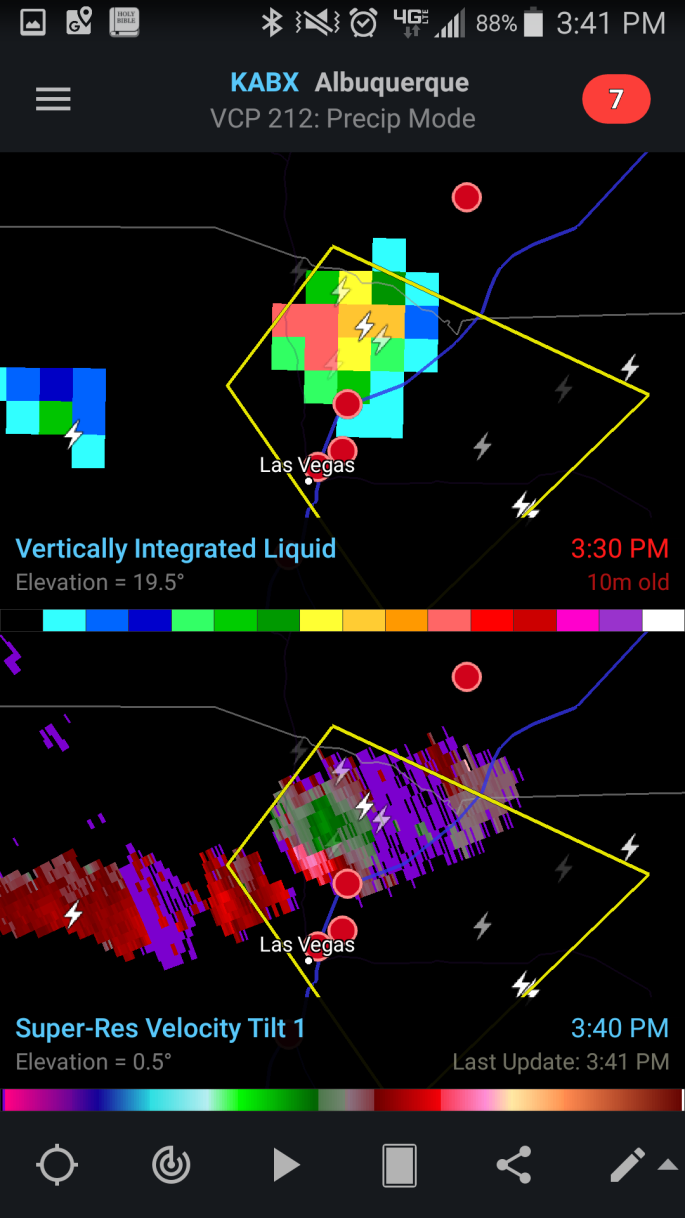 We headed south, and then took US-84 from just south of Las Vegas, about half way to I-40.  We stopped and took a few more photos.  Our storm had become part of a linear segment, moving slowly southeast. 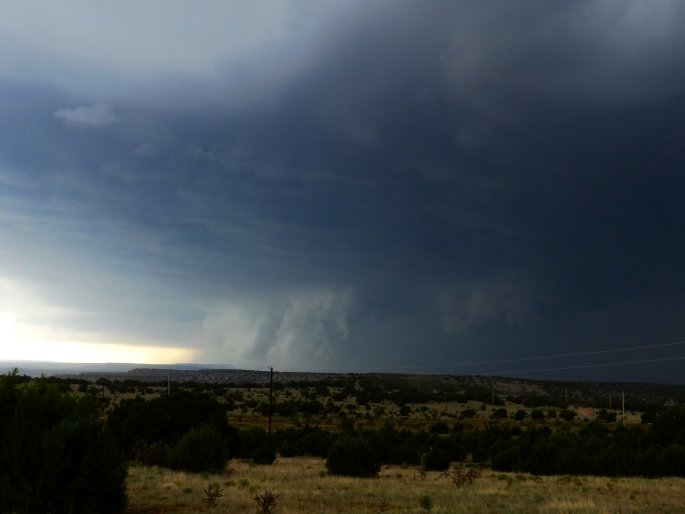 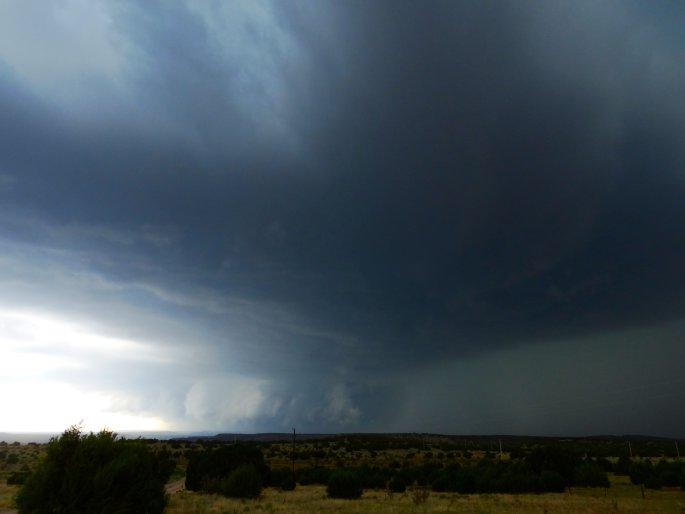 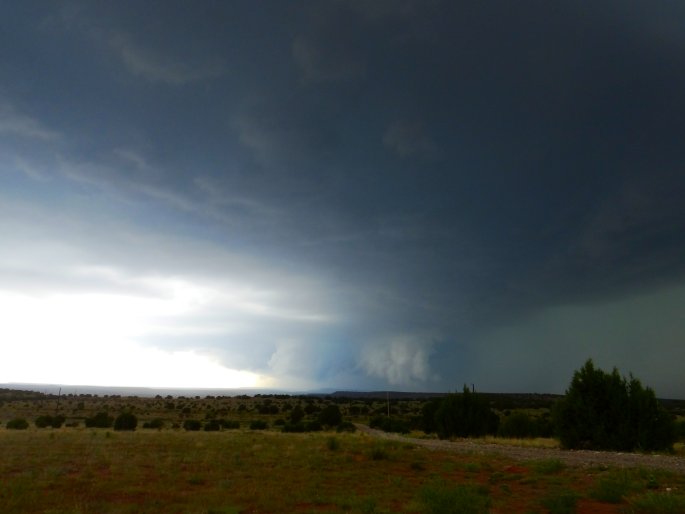 Our real problem was that there were storms to our south as well, and US-84 has no other real roads.  We waited for our northern storm to catch up a bit, and then went south, slowly waiting for the southern storms to continue east along I-40, clearing out of the way.

As the storms became linear, they became a little weaker, and definitely more difficult to chase.  We headed south to US-54, and then southwest to Vaughn, NM.  By now, many of the severe warnings had dropped in this area, and we were starting to lose daylight.  We watched the storm from the backside as we headed back up US-285 towards home.  The dark blue sky and the red dirt made a neat contrast, at least for someone skilled at photography (not me). 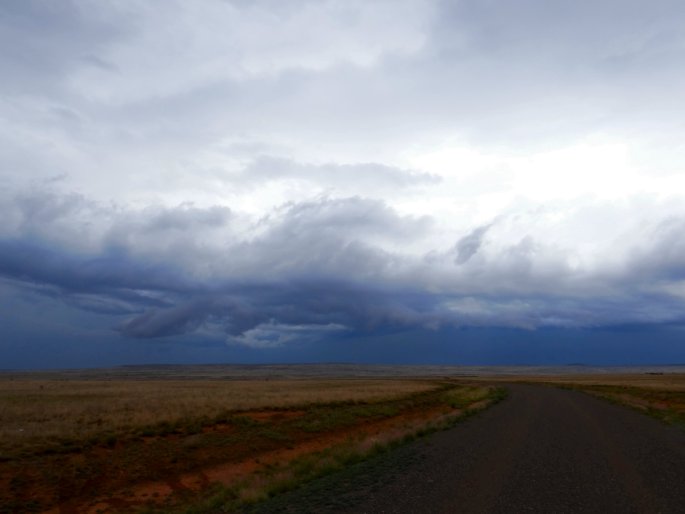 Here is a Google Maps image of our route: 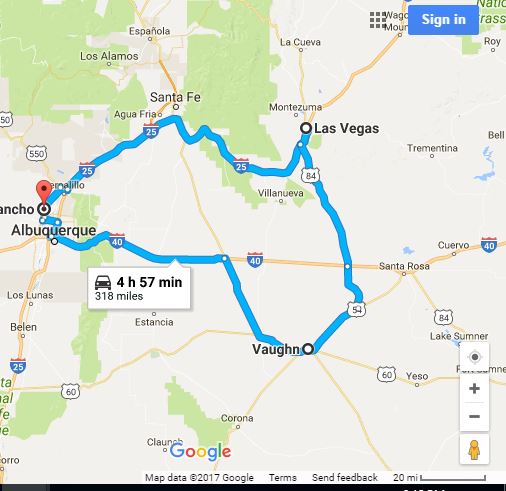 This blog is about my tales in storm chasing. My name is Seth Price and I am an instrumentation instructor at New Mexico Tech. My amateur radio call sign is N3MRA.
View all posts by highplainschasing →
This entry was posted in Chase Account, Severe Weather and tagged #nmwx, 2% tornado threat ring, Enhanced Risk, hail, Las Vegas, meteorology, New Mexico, severe thunderstorm, storm chase, weather. Bookmark the permalink.