Posted on June 26, 2017 by highplainschasing

Yesterday, we spent the afternoon chasing storms as they fired along the central mountain range.  I will have a separate post about this later today.

This morning has been still, sunny, and warm.  There are a few mid-level clouds around, as shown in the photo of my backyard: 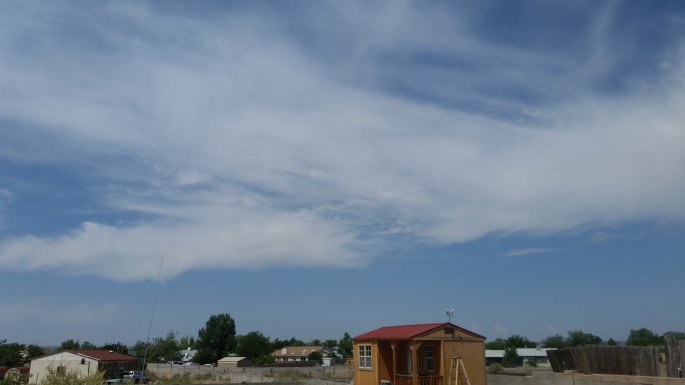 National Weather Service (NWS) in Albuquerque forecasts (for Socorro) a partly sunny day, with a 20% chance of isolated showers and thunderstorms, and a high temperature of 91 F. The winds will be from the southeast at 5-10 mph.  This evening will be mostly cloudy, with a 30% chance of scattered showers and thunderstorms, and a low temperature of 64 F. Winds will be from the south at 5-15 mph.

The NWS in Albuquerque forecasts (for Magdalena) a partly sunny day, with a 50% chance of showers and (potentially severe) storms, and a high temperature of 83 F. The winds will be from the northeast at 5-10 mph, becoming south in the afternoon.  This evening will be mostly cloudy, with a 40% chance of isolated showers and (potentially severe) thunderstorms, and a low temperature of 61 F. Winds will be from the south at 10-15 mph.

The NWS has issued a Hazardous Weather Outlook concerning the possibility of severe thunderstorms through most of the state this afternoon and evening.  Storms are expected to develop over the Continental divide and the Central Mountain chain, and trek southeast.  Heavy rains, gusty winds, and large hail are the primary threats.

The Storm Prediction Center (SPC) has issued a Marginal Risk for the central mountain chain and east, where gusty winds and large hail are the primary threats.  This does include the Rio Grande River Valley. 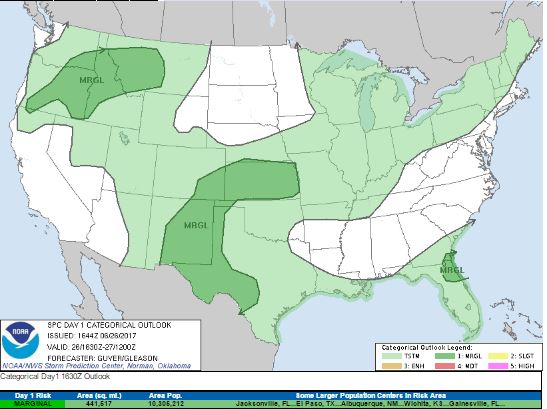 The visible satellite imagery shows some clouds scattered over the state this morning.  None of these clouds show strong vertical development at this time. 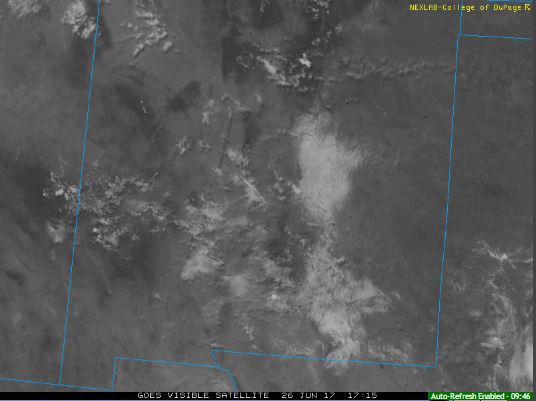 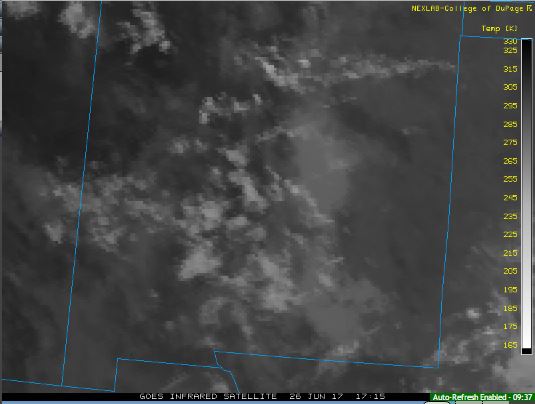 The water vapor imagery shows that there is plenty of deep moisture over the state today.  It appears that we have moisture from two different sources.  All moisture is moving across the state in a roughly zonal pattern. 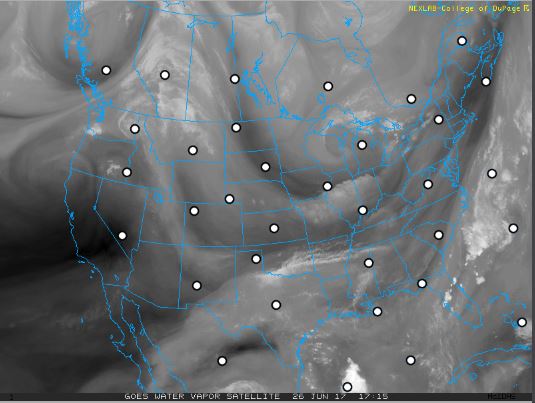 The 12Z sounding from Albuquerque shows a damp atmosphere this morning, with moderately-low dewpoint depressions below 350 mb.    There was 0.88 inches of precipitable water present in the column this morning.  There was 186 J/kg of Convective Available Potential Energy (CAPE) and -439 J/kg of Convective Inhibition (CINH) present.  There was no thermal inversion near the surface, and the 0-3 km average lapse rate was 5.6 C/km. 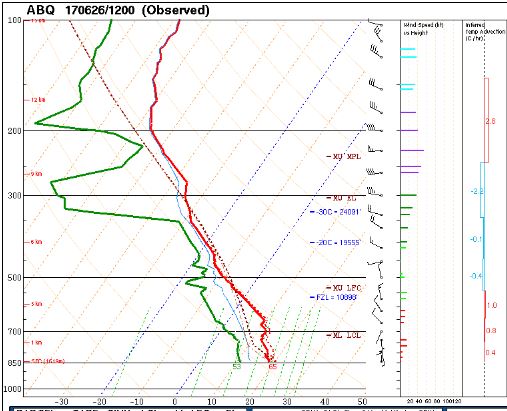 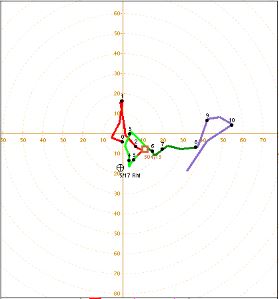 The surface observations (from the SPC Mesoscale Analysis Map) show mild temperatures, and moderately-high humidity (based on the surface dewpoint depressions).  The skies are clear and the winds are light.  There are no major frontal boundaries present over the state so far this morning. 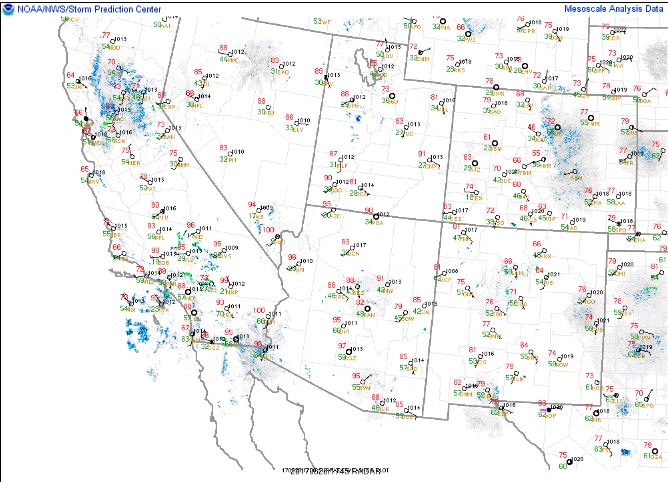 The surface pressure chart shows that high pressure exists in the eastern half of the state, and a thermal low in the western half.  There is a slight pressure gradient between them.  However, diurnal heating is expected to decrease the pressure everywhere over the next six hours, according to the RAP. 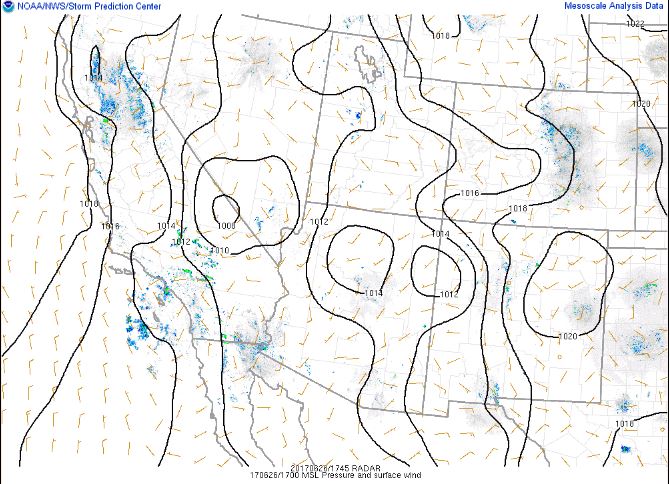 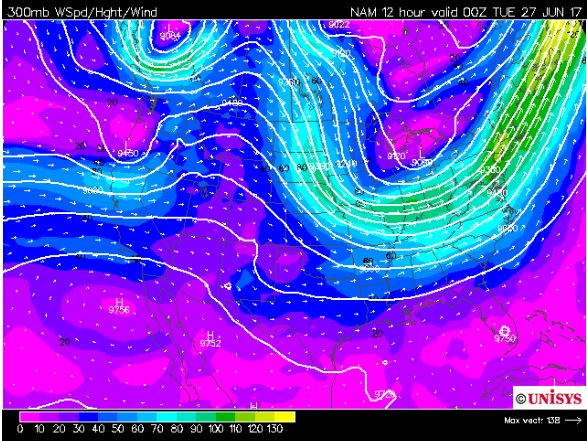 The 500 mb NAM chart shows that there is no strong vorticity advection over the state today.  This chart has been excluded from today’s post.

The 700 mb NAM chart shows a few pockets of rapidly-rising air over much of the western part of the state by 18 Z. 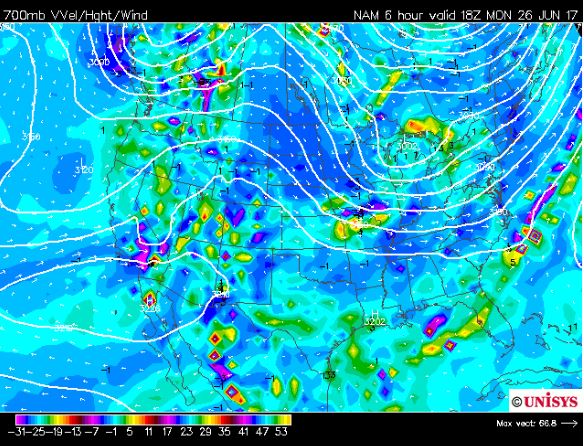 The 850 mb NAM chart shows that there is no strong thermal advection expected over the state today.  This chart has been excluded from today’s post.

The Precipitation chart shows that rain will be possible for much of the central part of New Mexico by 00 Z. 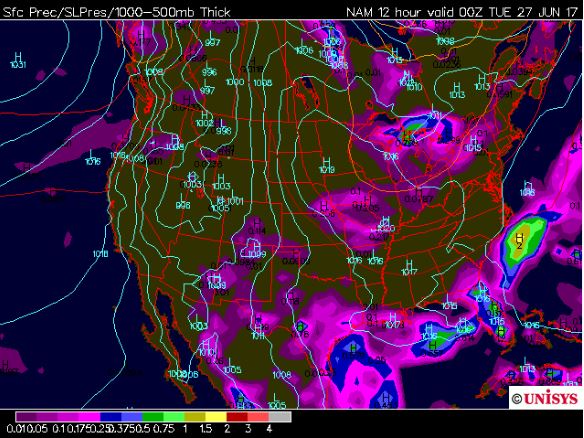 There is the potential for more storms today, and some of them will be severe.  However, the lower shear today (as compared to yesterday) will reduce the chances of tornadoes.  I will likely stay put today, and not chase.  I might go out for a bit this evening, if there is lightning, and try to take some nighttime lightning photography.  Otherwise, I will probably spend the day catching up on a few projects, including posting yesterday’s storm chase photos.

Thank you for reading my forecast.