I’ve given up on writing the number of miles at this point.  I’ll read the odometer at the end of the trip.  My dash is very dim (common defect with the Crown Vic) so it’s a pain to pull the mileage.

On Monday, 5/22, we had a severe weather threat in eastern New Mexico.  The Storm Prediction Center (SPC) issued a Marginal Risk for the area, with a less than 2% Tornado Threat ring. 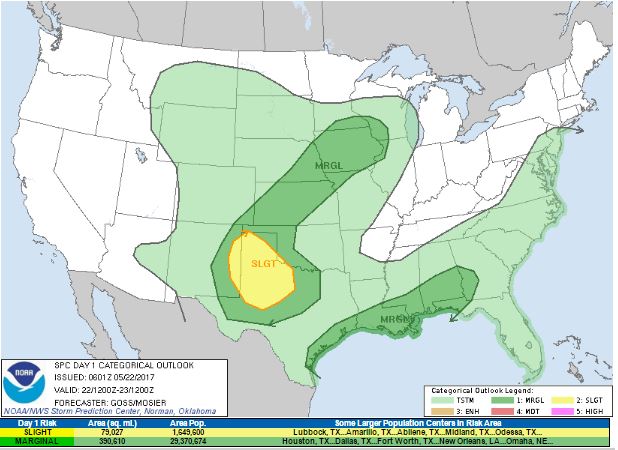 We had lunch at a Subway in Portales, and then headed to a park to wait for cloud cover to break.  When we got out of the cars at the park, I needed a jacket.  The second the sun started peeking through the clouds, the temperature went up quickly.  It felt more like a storm chase day than it had all trip.  Soon, a cell fired to our west, so we were on the road again.

This cell was going up in a partly-cloudy environment, so it was hard to distinguish all of the features.  The mammatus, however, was impressive. 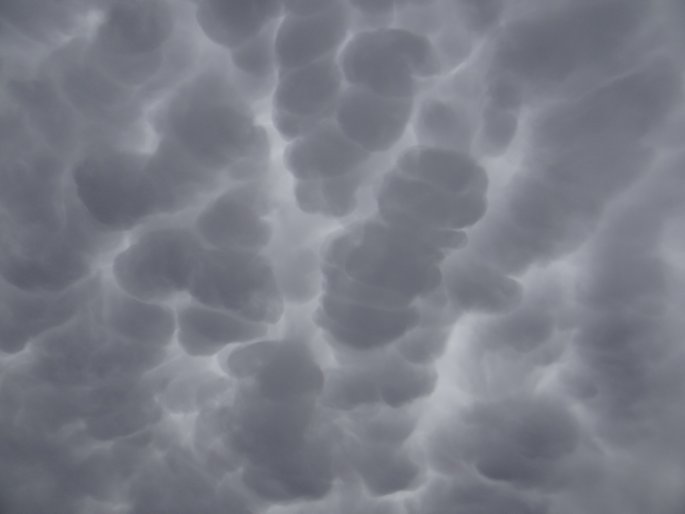 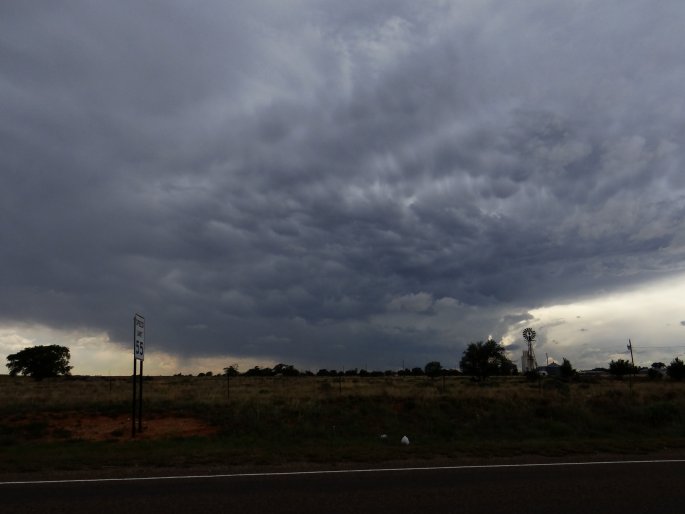 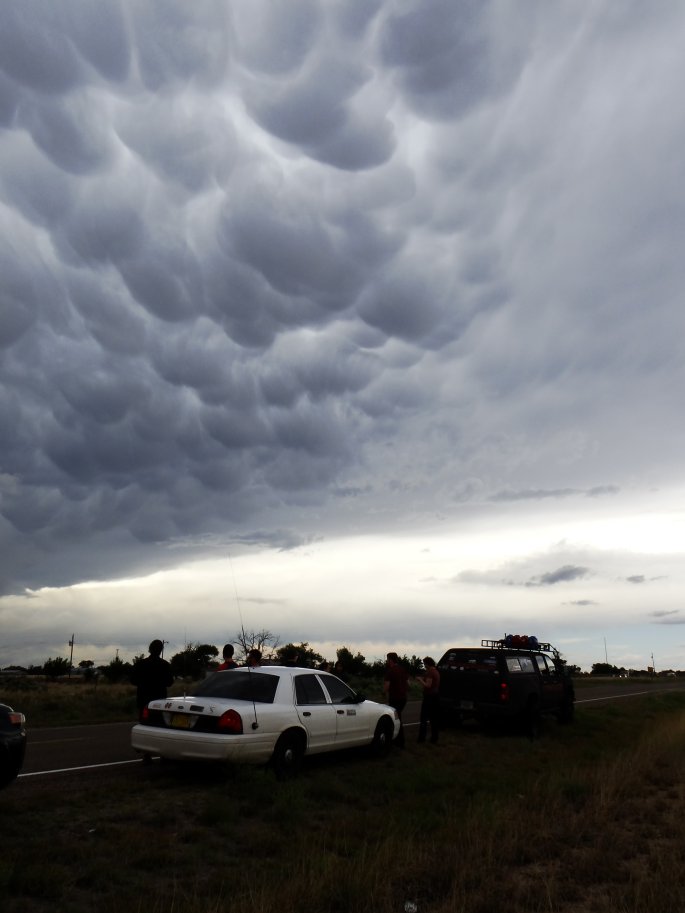 Another cell formed near Las Vegas, NM and was on a collision course with our storm.  We weren’t sure how the storms would interact, as often collisions of this nature attenuate storms, rather than amplify them.  We headed northwest to get around the collision.  Here you can see a few lowerings, though nothing was really spinning hard. 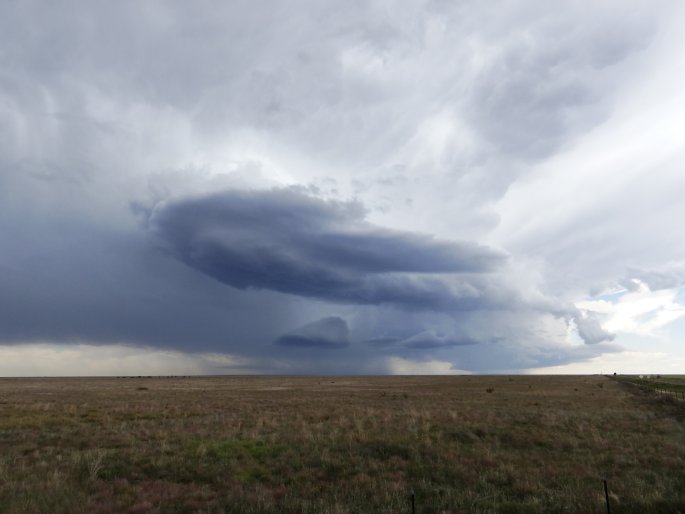 We fueled up at the Santa Rosa Loves and then took a southeastern road.  It was ahead of some new development.  In the distance, you can see a few more cells firing.  There were storms firing from the upslope flow, thanks to the topography. 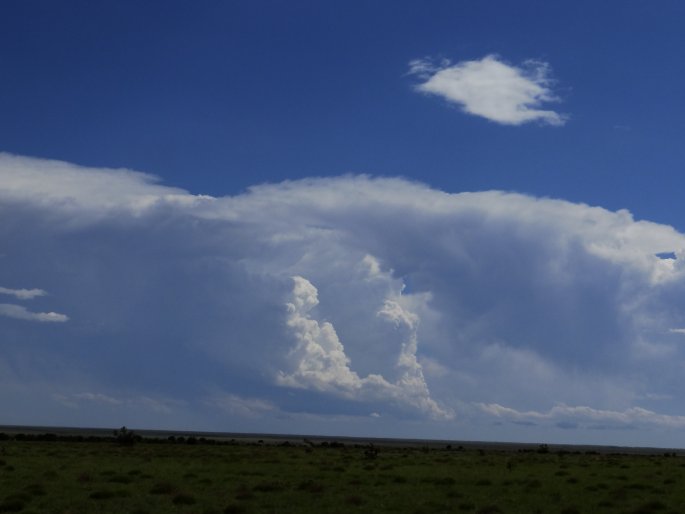 We ended up on one neat-looking low-precipitation (LP) supercell.  We went through a little bit of small hail (nickel at its largest) and then punched south.  With the LP cells, you can typically see into them from most sides.  We saw a high wall cloud, but this storm soon deteriorated. 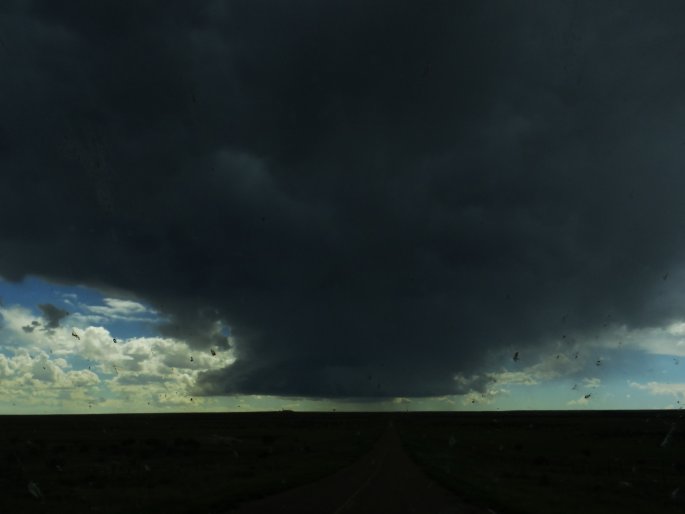 As that cell fizzled out, another one, nick-named the “3 o’clock cell” (based on its position to us) formed a nice, low wall cloud very quickly.  It sat almost stationary for a few minutes, eating up an outflow boundary. 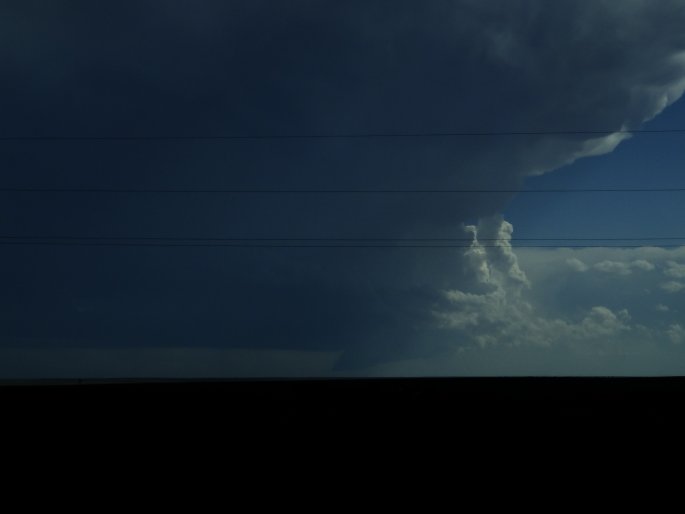 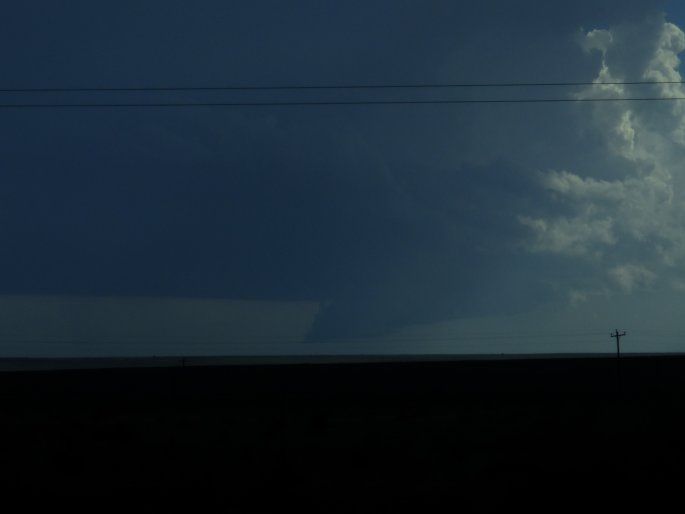 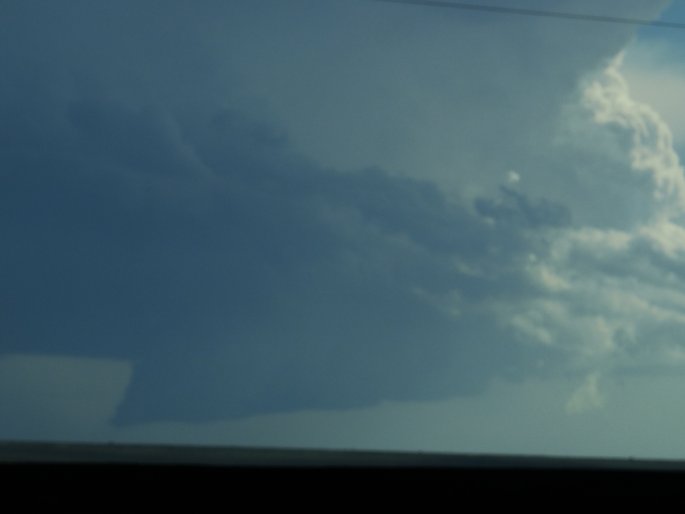 You will have to take my word for it, but a few minutes later, this put a tornado on the ground.  We don’t have photos of it, as it had moved into a much lower-contrast environment.  This wall cloud became even lower just before the tornado.  We sent our photos (no tornado on our photos, but of the wall cloud) to the NWS, and they said they have received no damage reports.

Eventually, we ended up behind this storm, and it fell apart.  However, the storm itself was amazing to watch, as it pushed southeast.  Notice the striations in this updraft. 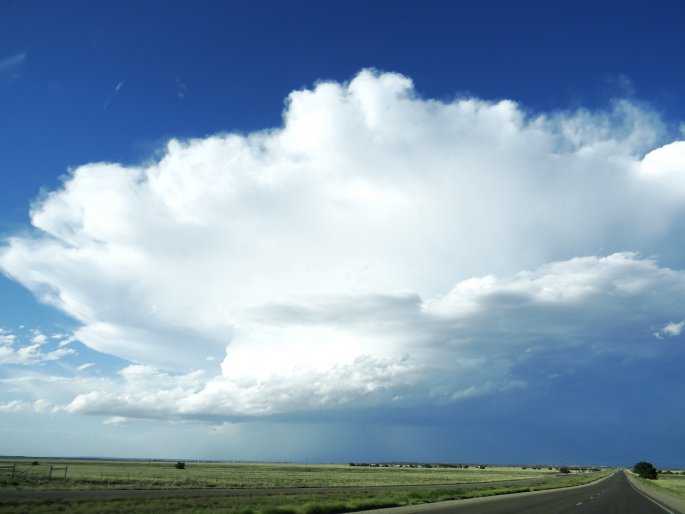 We did run up close to this cell as it was falling apart.  There was a ton of dust getting kicked up by the outflow winds, as well as up to 3″ hail, so we didn’t venture much closer.

With the storm gusting out, no other major ones forming in the stable air behind the storms, and the fact that we were running out of daylight, we decided to follow this storm to catch it at sunset. 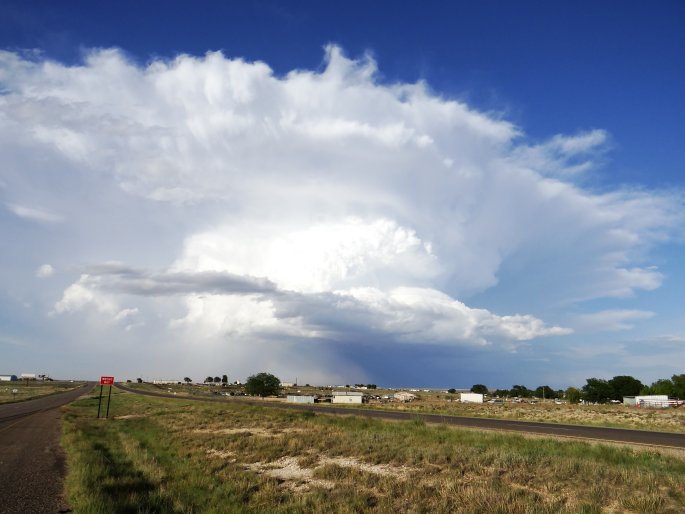 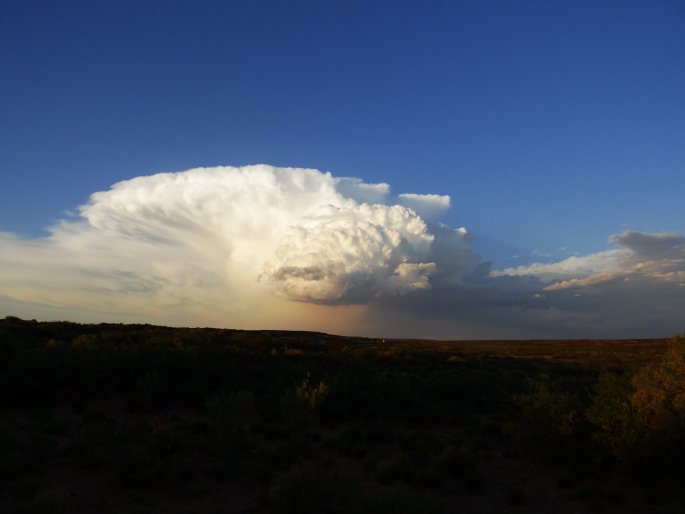 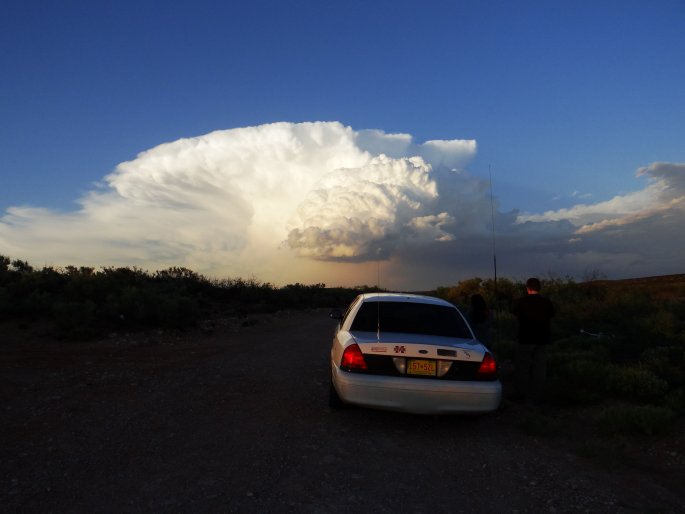 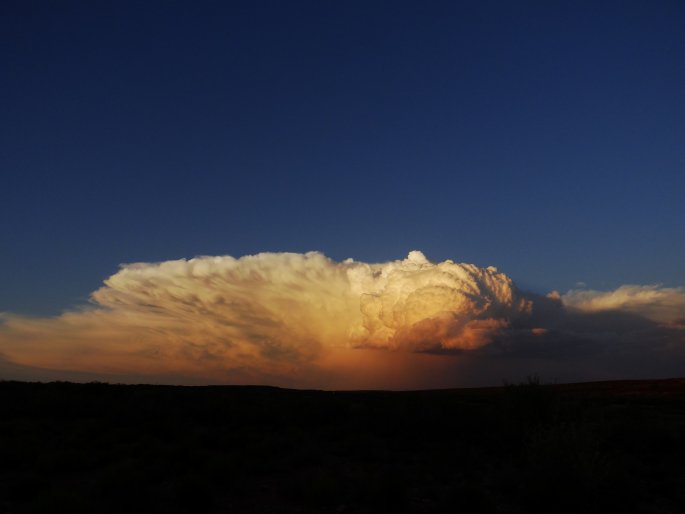 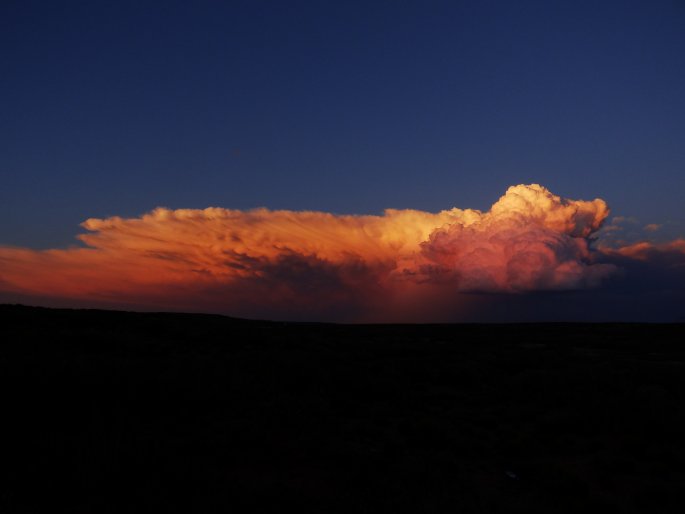 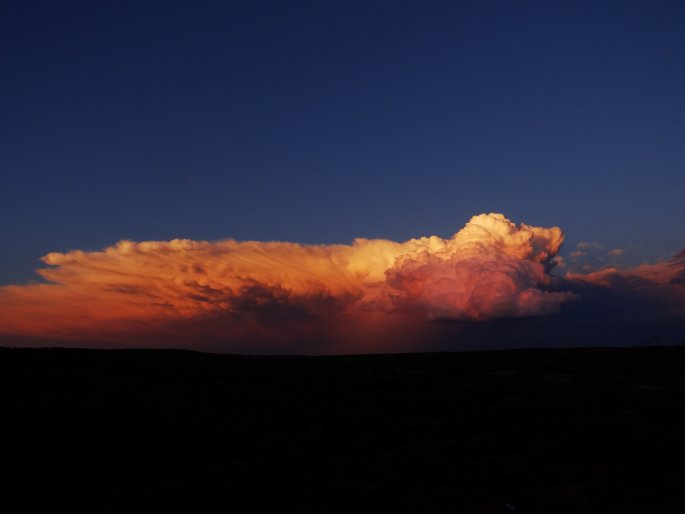 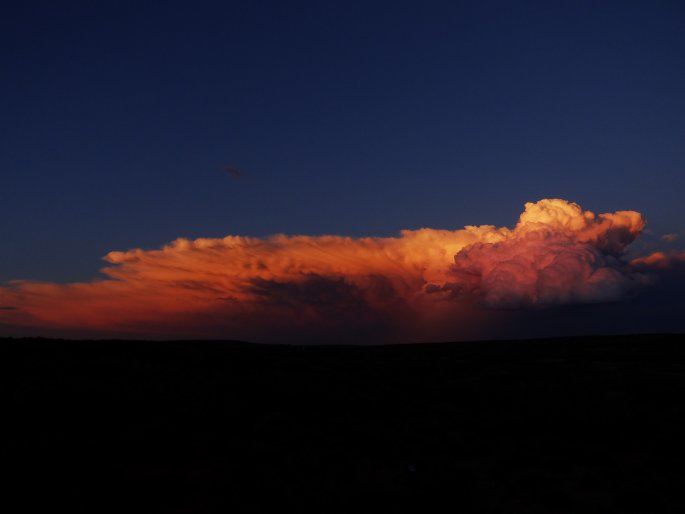 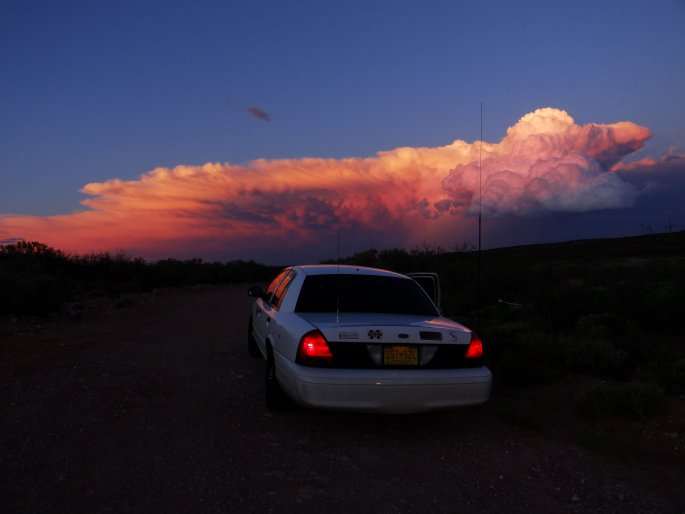 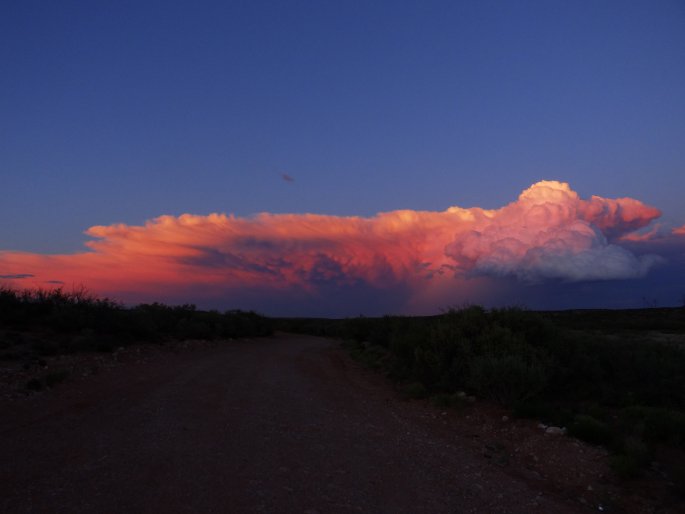 We ended the day pushing east to the Lubbock, TX, Super 8 for the late evening.  All in all, Monday was at least a 580 mile day. 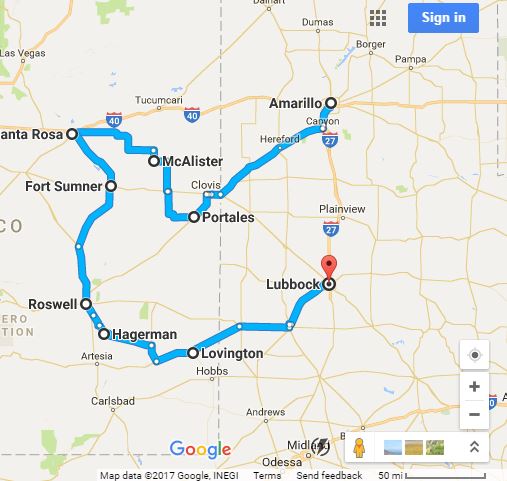 I hope you enjoyed the photos!

This blog is about my tales in storm chasing. My name is Seth Price and I am an instrumentation instructor at New Mexico Tech. My amateur radio call sign is N3MRA.
View all posts by highplainschasing →
This entry was posted in Chase Account, Severe Weather and tagged Lovington, meteorology, New Mexico, nmwx, photography, Santa Rosa, storm, storm chase, sunset, tornado, weather. Bookmark the permalink.