Yesterday was a good chase day.  We started out the day in Amarillo, TX, with our target area nearby.  Originally, we were trying to decide between Childress, TX, and Canadian, TX, but decided to split the difference, rolling to Shamrock, TX.

The Storm Prediction Center (SPC) has issued an Enhanced Risk for a large swath of land to our east. 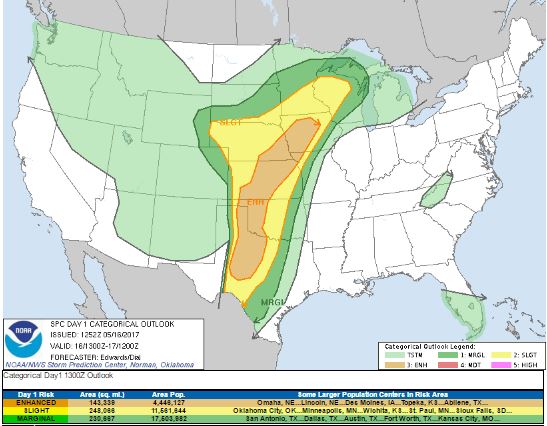 Associated with the Enhanced Risk was a 10% Tornado Threat Ring: 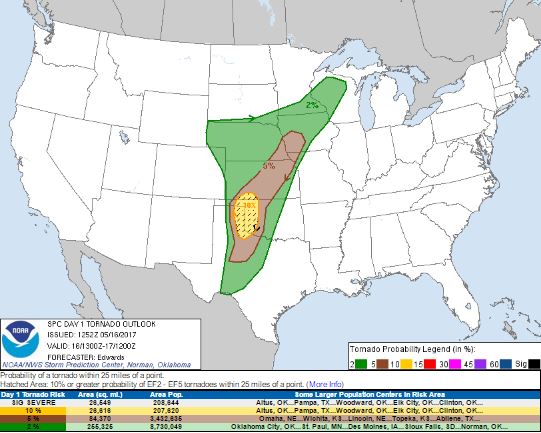 The 12Z upper air sounding from Amarillo highlighted the threat.  There was over 2000 J/kg of Convective Available Potential Energy (CAPE), with a thermal inversion to let the atmosphere cook for a bit. 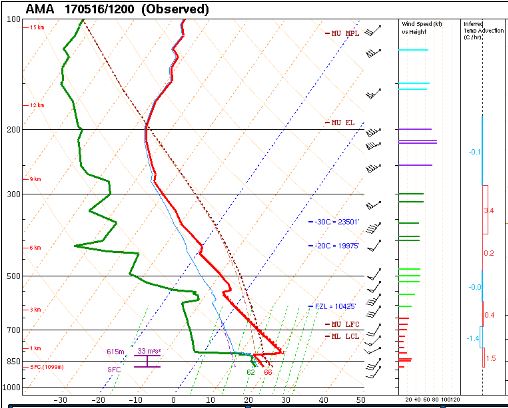 The hodograph was not as impressive, but with the approaching speed maxima aloft, the shear was expected to increase: 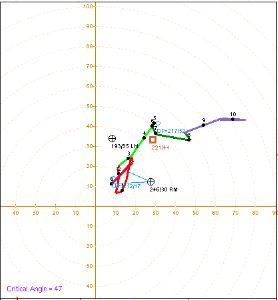 We waited around in Shamrock for a few minutes and collected more data.  The SPC had upgraded the risk to a Moderate.  The RAP (model) was expecting the CAPE to climb to over 4000 J/kg along the Texas/Oklahoma border.  We decided to jog south to Childress, as the CAPE and shear looked a little better to the south.

We drove south, and under cloud cover.  I never like to see a big stratus shield when I am chasing.  The clouds block the heating from the sun, keeping the temperature lower, and make it harder for updrafts to become storms.

In Childress, we reevaluated the situation again.  The clouds had kept the land cooler by a few degrees.  However, the dewpoint was still high, and the winds were from the southeast (versus the south in Shamrock), and the clouds were thinning.  These were all good signs.  As the clouds began to clear, we decided to drive a little northwest along US-287.  That’s when the first cells began to pop up.

We arrived on the first cell soon after the tornado warning, but there was no tornado on the ground.  However, there was a strongly rotating wall cloud, so a tornado was imminent.  We watched the storm for a few minutes, just northwest of Claredon, TX.  As the storm approached, we made a U-Turn, headed southeast into Claredon, and then north. 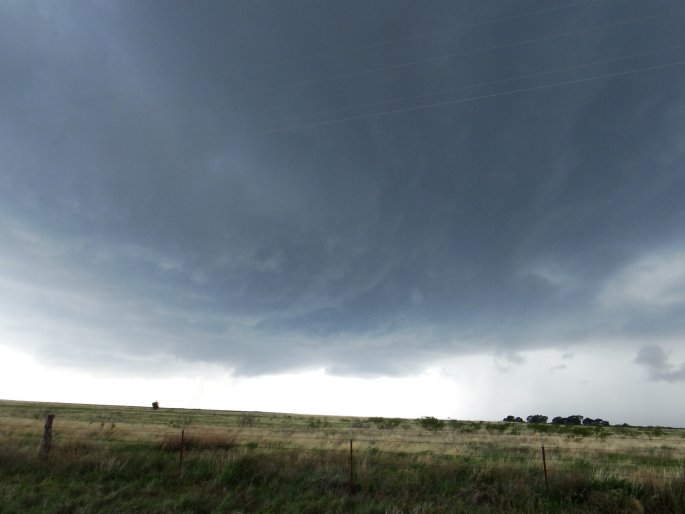 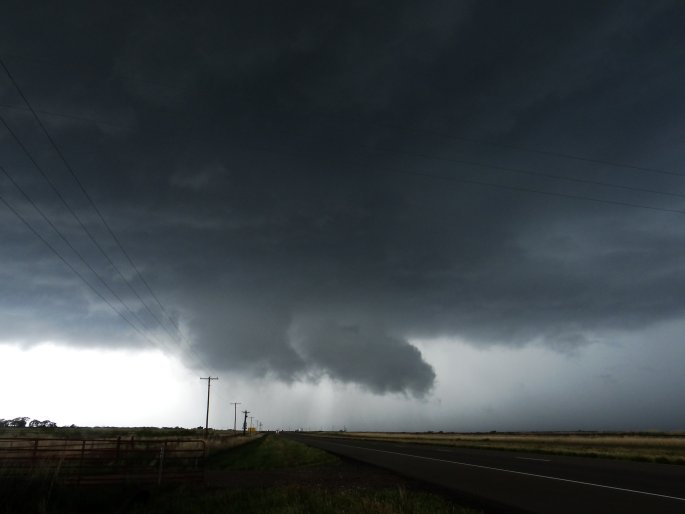 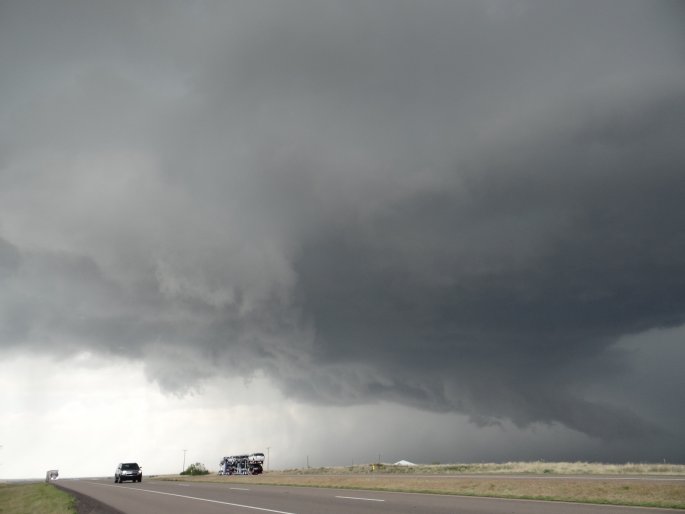 As we watched the storm through the hills and trees, I caught sight of a strange feature.  Kathryn says, “Hey, look at that, that can’t be a tornado,”  I saw the same feature, and thought, “No, it’s too high based,” but as I was saying it, I saw that it was a tornado, as it moved like one.  We followed if for a few minutes until we found a place to pull over and take a few photos: 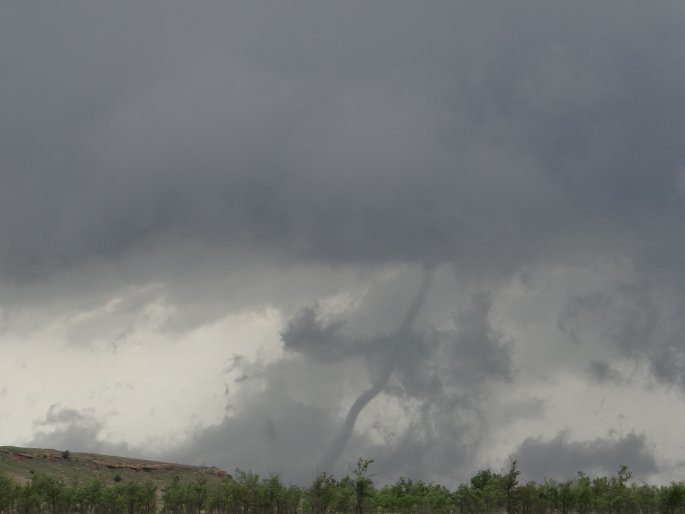 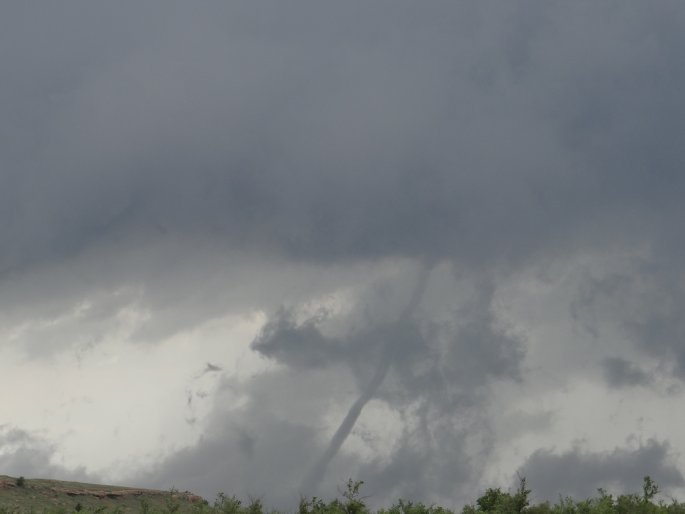 The storm kept cycling, and we would see a ragged wall cloud again, every so often. 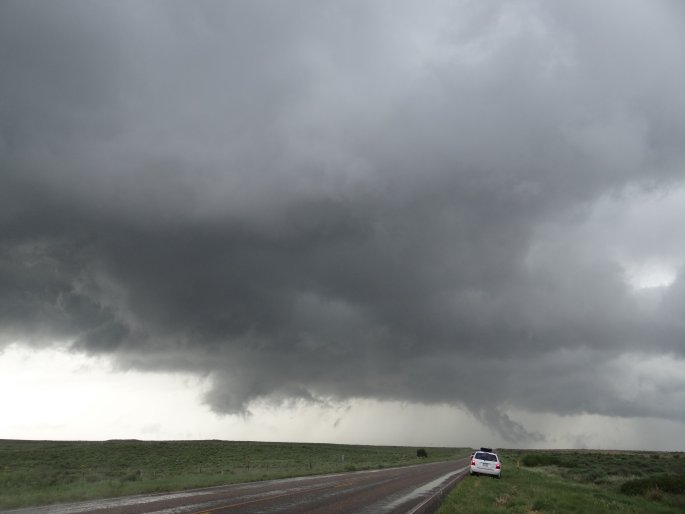 We were always right behind the hail, as well: 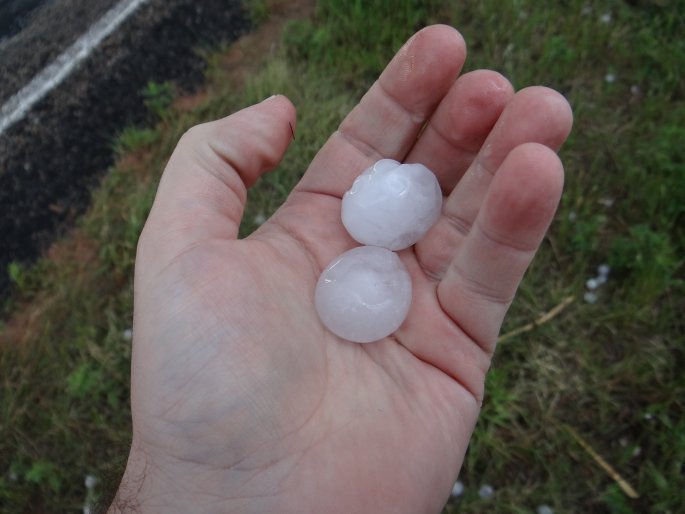 We continued north, and then east on I-40.  The cell had continued to drop tornadoes, but they were out of our sight.  We went east, and got ahead of the storm.  At Shamrock (again), we decided to go slightly north.  We targeted Wheeler, TX, but the storm would get there before we did.  Instead, we snaked along another road that led us just across the border into Oklahoma.

Along the way, I hit a large tumbleweed that destroyed a magnet mounted antenna on my car.  I’ve never had that happen!  No damage was done to the car, so we continued east.

By now, there were two cells to chase.  One was to our north, and one to our south.  The northern cell was starting to gust out, and the southern cell was looking better and better.  We dipped southeast into Sayre, OK.  We figured we could get ahead of the southern cell.  Instead, we found the hail core.  We took shelter from the golf ball sized hail under the overhang at a gas station.  At this time, I set up a livestream on Facebook.  I’ll see if I can post a link to that later.

We left Sayre on I-40 and then dropped south, now behind the storm.  We arrived at a storm chaser convergence, as the road was blocked by police and fire fighters.  They eventually let the chasers through, but we were even farther behind the storm.  While we stopped on the side of the road to reevaluate, the rest of the Virginia Tech Hokie storm chasers showed up and followed us the rest of the day. 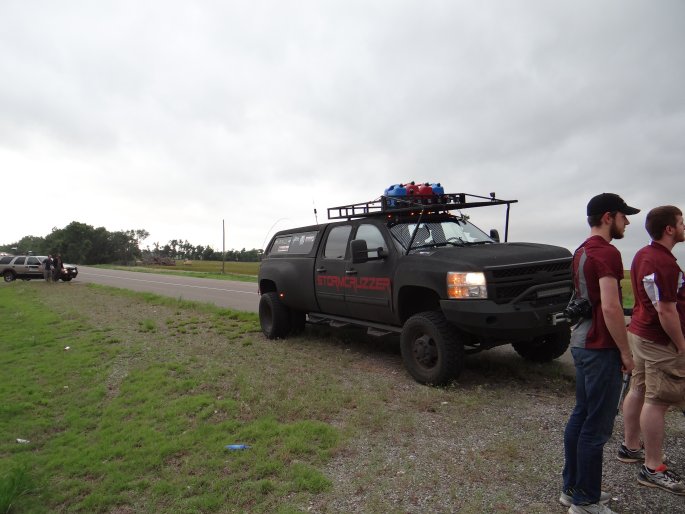 However, now south and west of a slow-moving storm, we were able to get ahead of it again near Weatherford.  We passed through town and headed north.

We were starting to run out of daylight.  The cell was beginning to lose definition as well, so we decided to turn around and start looking for lodging. 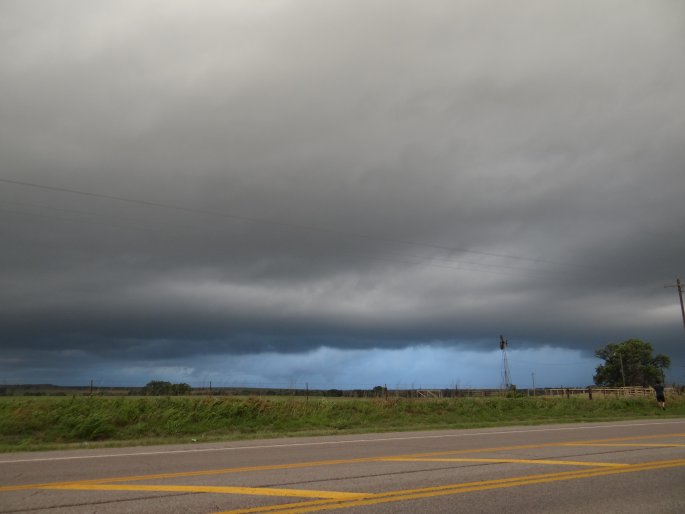 As we approached Weatherford, we heard on amateur radio that the city had no power.  There was one gas station that was running on a generator, so we refueled and then headed west to Clinton.  En route, we reserved rooms in Clinton.

When we exited I-40 for Clinton, we could see that Clinton had no power as well.  The folks at the hotel were really nice.  We got our reservation cancelled, and they were so nice about it.  Other folks were annoyed with them, but the Hokies brought the ladies cold sodas and some snack cakes.  They came out and chatted with us for quite some time about chasing and wished us well.

We knew better than to continue west; unfortunately, Elk City had taken a direct hit from a tornado.  Instead, we turned east towards Oklahoma City, punching through the dying core of a cell, and getting rained on for 30 miles or so.

We pulled into Oklahoma City, had dinner at Buffalo Wild Wings, and chatted with another former Hokie storm chaser, Trevor, who was chasing with the TWIRL project this year.  We ended up staying in the Econo Inn and Suites for the night.

Overall, it was a great first chase day.  We beat the Moderate Risk, Potentially Dangerous Situation, and Tornado Watch, saw a tornado, and caught up with the rest of our Virginia Tech crew.

Our route is shown below: 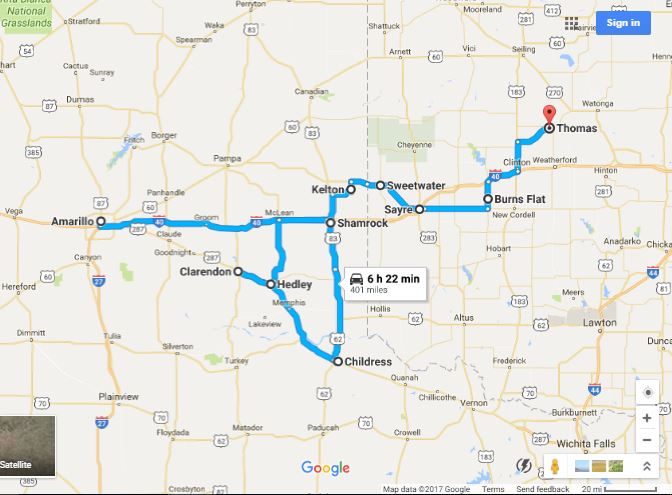 This blog is about my tales in storm chasing. My name is Seth Price and I am an instrumentation instructor at New Mexico Tech. My amateur radio call sign is N3MRA.
View all posts by highplainschasing →
This entry was posted in Chase Account, Chase Crew, Severe Weather and tagged #okwx, #txwx, meteorology, oklahoma, severe weather, storm chase, Texas, tornado, weather. Bookmark the permalink.