Yesterday, I started the day just west of Wichita, KS, at a truck stop. It did not have a shower, even though the app said it did. Instead, I drove to the Love’s in McPherson and showered there.

The Storm Prediction Center (SPC) had issued an Enhanced Risk (and later upgraded to a Moderate Risk) for much of Kansas and Nebraska.

Associated with the Enhanced Risk was a 10% Tornado Threat Ring.

In spite of the large chances of severe weather, my fear was that storms would fire too quickly and congeal into a Mesoscale Convective System (MCS). There was almost 6000 J/kg of Convective Available Potential Energy (CAPE) present and virtually no capping inversion to hold back some of the weaker storms.

I spent several hours at the Love’s looking at data. We had overcast skies already, though some clearing was taking place. Soon, not one, but a many storms began to fire. As soon as the storms had any vertical development, they were quickly severe warned. Seeing how quickly all of the storms fired, I decided it was best to leave town and try to get out before any hail or tornadoes. I left town west towards Great Bend. Here was the radar image from soon after I left the Love’s: 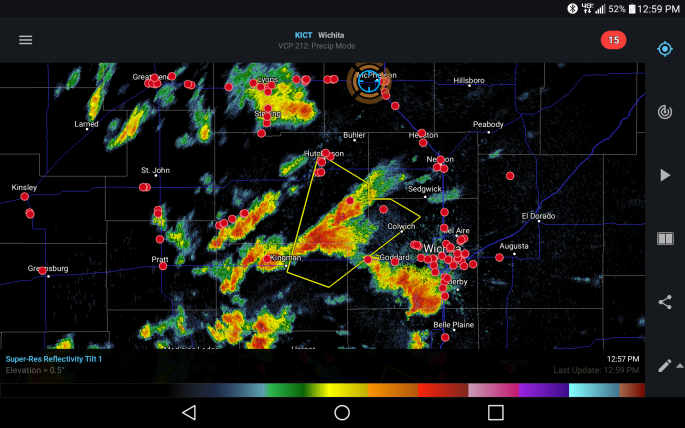 Once I arrived at Great Bend, I could see that the storms were generally trending north. My original plan to continue west on US-56 would not work- there were severe warned (and at least one tornado warned) cell along the path. Instead, I headed south on US-281, jogging in front of a few cells to the west to see what I could see.

As it turns out, I couldn’t see anything. The cells were building all over the place and one would pulse up for a bit and then quickly weaken, leaving behind a weak convective cluster. I continued south on US-281 to Pratt, and then turned west on US-54, which was mostly clear. Farther west, the cells were slightly more discrete: 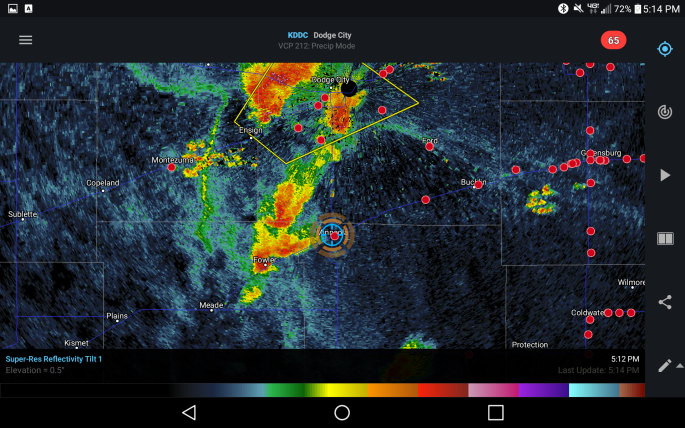 Near Fowler, KS, I played with a severe-warned cell that was briefly tornado-warned. I was north of it, and just watched it build. In the first picture, you can see plenty of dust kicked up by the outflow winds. 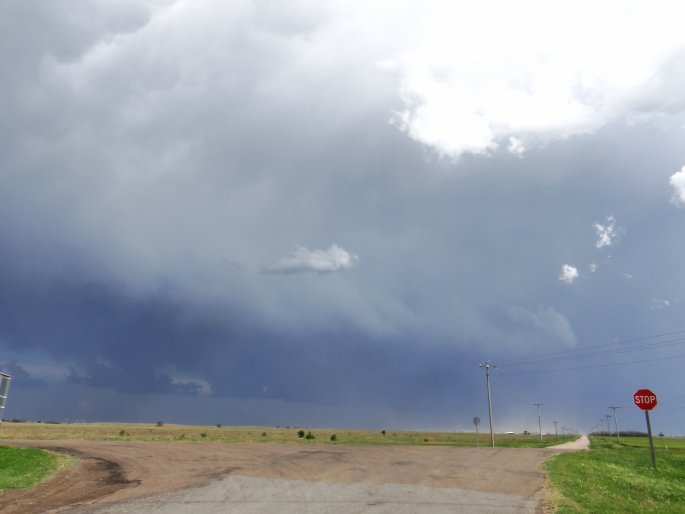 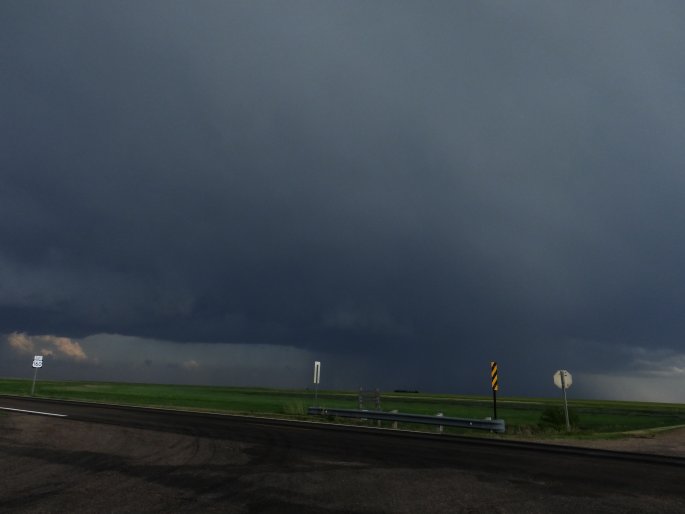 There was plenty of outflow on these storms. At one point, there was a brief gustnado (rotation due to outflow winds) that I marked on the photo below. However, no tornadoes visible. 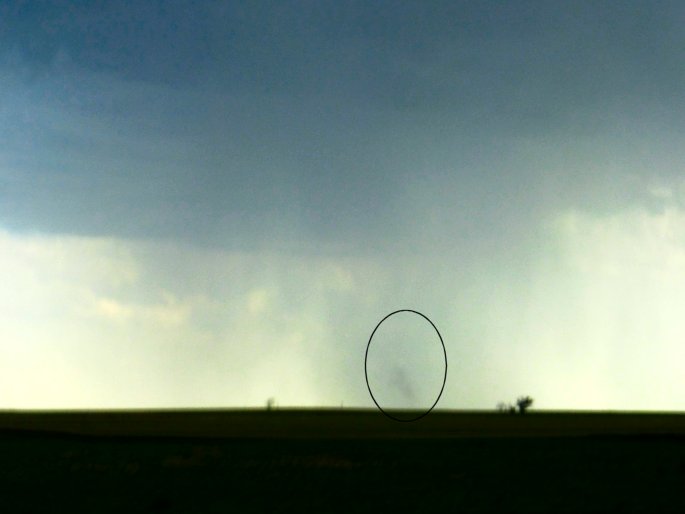 I also took a photo looking north, so that you can see the mammatus clouds ahead of this storm. 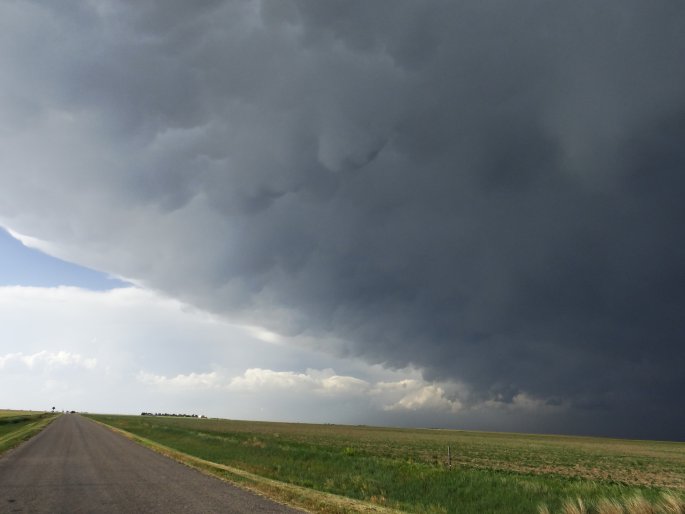 The storm quickly weakened, so I continued into Liberal, and then across the Oklahoma Panhandle, taking a few photos of the storms to my northeast at sunset. You can see the strong back-sheared anvils, overshooting tops, and mammatus clouds on this cluster of strong storms. 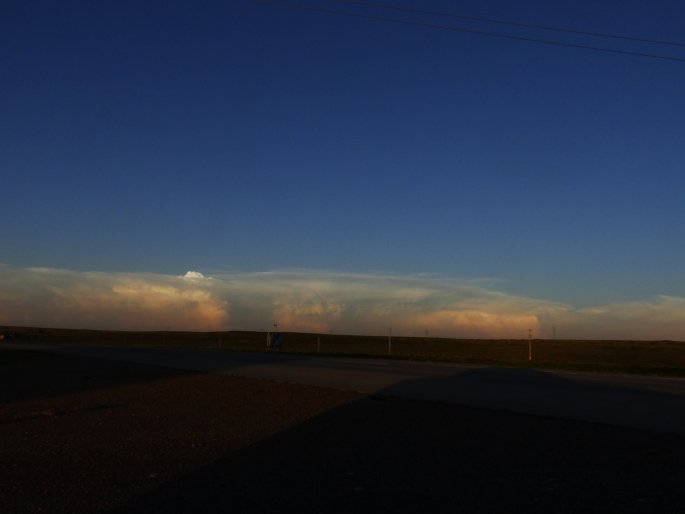 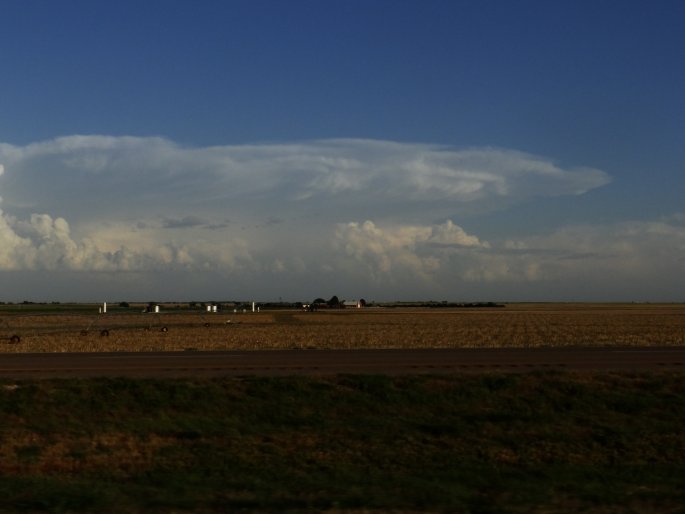 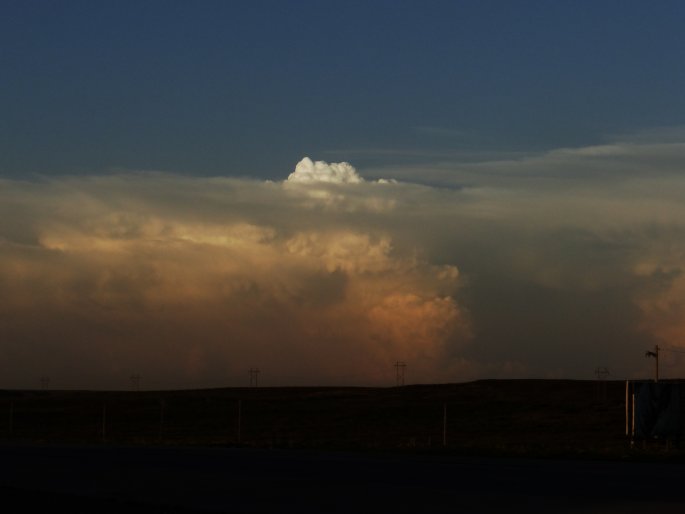 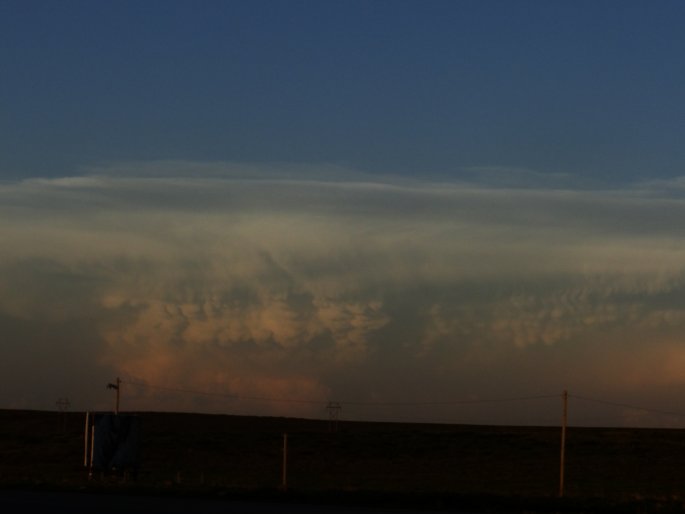 Soon after dark, I developed a headache, so I pulled over and slept at a picnic area until 5 am or so, and then finished my trip home.

Thank you for reading this post. Stay tuned, as I will post more details about each chase day.

This blog is about my tales in storm chasing. My name is Seth Price and I am an instrumentation instructor at New Mexico Tech. My amateur radio call sign is N3MRA.
View all posts by highplainschasing →
This entry was posted in Chase Account, Practicing Concepts, Severe Weather and tagged #meteorology, #stormchase, #weather, #wx, 10% Tornado Threat Ring, Enhanced Risk, Fowler, Kansas, meteorology, storm chase, weather. Bookmark the permalink.