Posted on June 18, 2015 by highplainschasing

The Storm Prediction Center (SPC) 13Z analysis had us on the boundary of the Slight Risk area, with an Enhanced Risk area to our east.

Associated with this entire area was a 5% Tornado Threat Ring.

Our analysis did not show us needing to go as far east as the Enhanced Risk, but perhaps just far enough to get out from the cloud cover and fog that we were under while in Limon, CO. This melted away throughout the morning and along our drive east along I-70.

By 16:30Z, the SPC had expanded their Enhanced Risk region to include our target area of northwest and north-central Kansas.

The visible satellite imagery around 20 Z shows storms firing along the I-25 corridor, only about an hour and a half west of where we had started this morning. One could say, “Well, if you had been more patient, you could have driven less and seen those storms.” However, we had our reasons for trekking east. Patience is now waiting for storms in our target area, rather than turning around and heading west.

This visible satellite imagery also shows a cumulus field over northwestern Kansas, where we were hanging out. We just need to find the trigger that sets it all into motion. We knew that there would be a shortwave that passed through the area that may have been enough to trigger storm development.

A shortwave has rising air on the eastern side of it, which can develop storms. On the back side of it, there is often an area of sinking air that causes clouds to mix out.

Here is a photo of our drive north into the cumulus field: 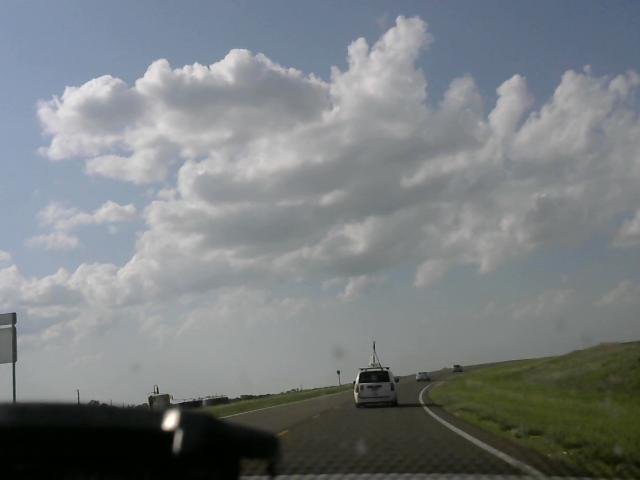 …and here is a photo SIX MINUTES later, facing the same direction. 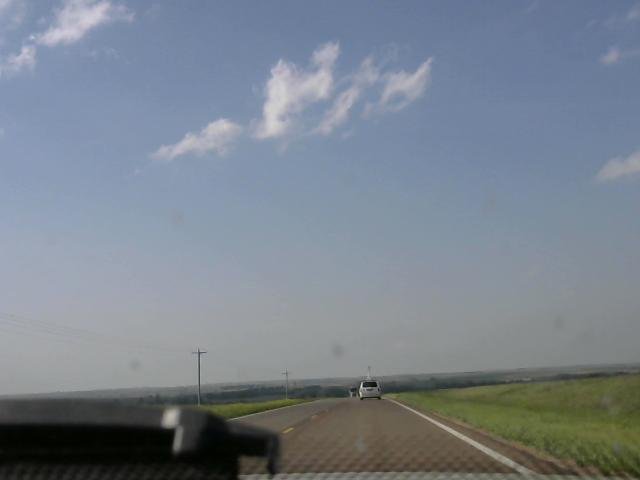 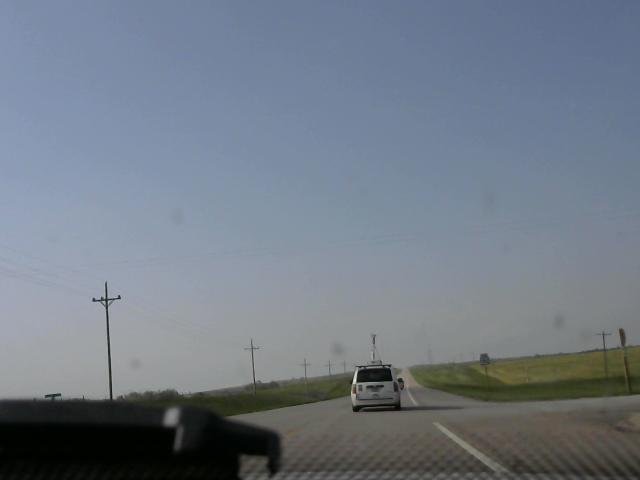 The skies had cleared up and the shortwave had passed. We were going to need another trigger.

A short video clip of this subsidence is shown here, courtesy of my dashcam:

However, a little ways to our west, one storm had managed to fire, and several others were building, in spite of the clear skies over our heads. We turned west towards Atwood, KS. We are one of the red dots in the line of chasers going towards this single low precipitation supercell.

The blue crosshairs are my vehicle. We dropped south soon after this screen capture of the radar.

We ducked south and stayed ahead of the precipitation core. A little moisture on the Kansas dirt roads changes their consistency to that of pancake batter, and we weren’t about to get caught in that!

The storm relative velocity showed some weak rotation, but I only managed to capture a base velocity image.

I am currently uploading another YouTube video, but it is not ready yet.

The Severe Weather Outlook is from the Storm Prediction Center website.
The satellite imagery is from the NOAA Satellite and Information Service.
The surface observation and upper level charts are from Unisys Weather.

This blog is about my tales in storm chasing. My name is Seth Price and I am an instrumentation instructor at New Mexico Tech. My amateur radio call sign is N3MRA.
View all posts by highplainschasing →
This entry was posted in Chase Account, Follow Up, Practicing Concepts, Radar Imagery, Satellite Imagery and tagged #stormchase, Kansas, meteorology, storm chase, subsidence, supercell, timelapse, video, weather. Bookmark the permalink.