Posted on June 6, 2015 by highplainschasing

The Storm Prediction Center (SPC) had an Enhanced Risk and 5% Tornado Threat Ring for parts of Kansas, Nebraska, and Colorado.

We started the day in Colby, KS, under cloudy skies. We had to get from under the cloud shield, or have it mix out throughout the day, or storms were not likely at all. We had a choice between playing a boundary near the Kansas and Nebraska border, or playing upslope flow into the Rocky Mountains (and the traffic of the Denver area).

We drove towards the west, but the rainy, foggy conditions worsened. When we had data again, about 20 miles east of Limon, CO, we checked the visible satellite imagery. The weather had cleared up in Kansas, and was clearing from the south in Colorado. We did one of the most common moves in storm chasing: the U-turn.

We stopped in Burlington, CO, for a few minutes and watched the developing cumulus field, and then turned north, and waited in Wray, CO, for quite some time.

Storms were beginning to fire and congeal southwest of us (back near Limon!), but the congealing mess was not attractive. However, there was one cell that sat out ahead of the mess. That was going to be our storm. We traveled south (another u-turn) and then slightly west towards Idalia, CO, passing through town and watching the base of the storm move towards us.

In the low-contrast, poor visibility, there was some cloud mass that hung low. Nobody dared say the word, but it looked like a tornado. Everyone strained their eyes and used zoom lenses to see into the storm. My photos weren’t great; a few other VT storm chasers had better ones. From our perspective, it looked like a large wedge tornado! 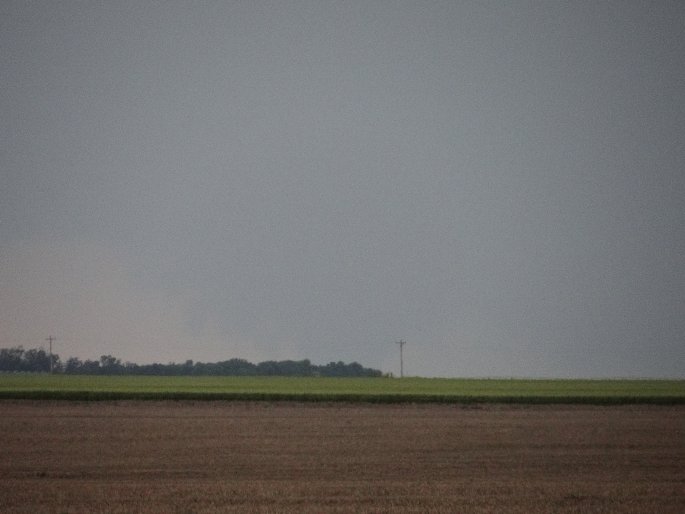 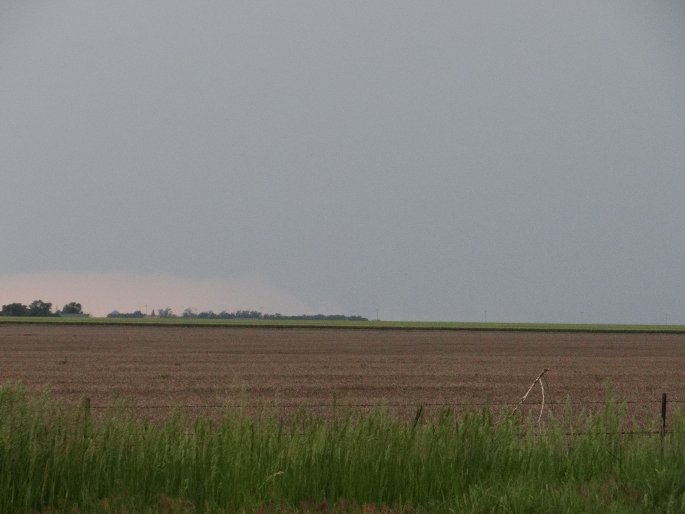 I bumped the contrast and saturation up a lot, and if you squint your eyes, you’ll be able to see it too: 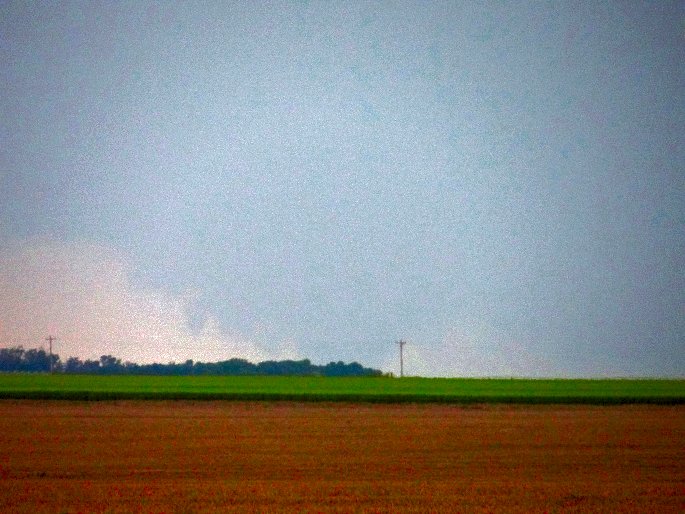 The velocity couplet matched on radar, but the radar wouldn’t know the difference between a low-hanging, rapidly rotating wall cloud and a wedge tornado. However, a few of our friends, on the south side of this storm, could see very clearly that there was a large wedge tornado on the ground. A phone call and some data later, we could see (online) what they saw in real time. Large tornado.

The real problem was that at this point, we are northeast of the storm, where there is precipitation, and limited view into the storm. The precipitation was catching up to us, and beginning to block our view. By now, storms are firing all along I-70, and even into western Kansas. To the north and west, we have the potential for large hail. To the south, we have developing storms that may produce large hail. To our east, we have mostly open road, but that is moving away from the area where we can view the storm.

The only safe option was to travel east, knowing that we would not be able to tag this monster storm and wedge tornado anymore. It’s one of those things that just has to be done.

It’s also interesting to think about; technically, we caught a tornado today, but I liked the photos from the last two days much better, as we were in a better viewing position. You win some, you lose some. Fishing wouldn’t be fun either if you caught a big fish every single time you cast.

After we left the storm, we dealt with light to moderate rain from a few developing cells, “core punching” a little storm with a lot of rain, near Bird City, KS. We then turned north and trekked through Nebraska, as Dave had set up lodging in Kearney, NE, for the evening (and for the threat today). We drove through light rain for about three hours, first north, and then east.

Once we merged onto I-80, and were almost to Kearney, we ran through the same tiny cell that we had met in Bird City, KS. It had not intensified, it had just persisted. And while we had to bounce through the roads and small towns of the High Plains, it trekked happily northeast, waiting for us to arrive. We unloaded the vehicles in the pouring rain and ended the long day in the Kearney, NE, Super 8.

Today looks to be promising in central and eastern Nebraska, so we will linger for another day or so and find out. After tomorrow’s threat, I will likely return home and end this year’s chase.

This blog is about my tales in storm chasing. My name is Seth Price and I am an instrumentation instructor at New Mexico Tech. My amateur radio call sign is N3MRA.
View all posts by highplainschasing →
This entry was posted in Chase Account and tagged #stormchase, colorado, meteorology, photography, severe, storm, storm chase, tornado, Vona, weather, wedge. Bookmark the permalink.