Posted on June 5, 2015 by highplainschasing

We started out the day in Limon, CO. The skies were overcast and foggy, though the fog and clouds burned off by the time we left the hotel.

We traveled east on I-70 after a 5% Tornado Threat ring just north of the I-70 corridor in Kansas. I was targeting somewhere between Colby and WaKeeney, KS. Before we left Colorado, there were accas clouds beginning to show up, indicating mid-level instability. 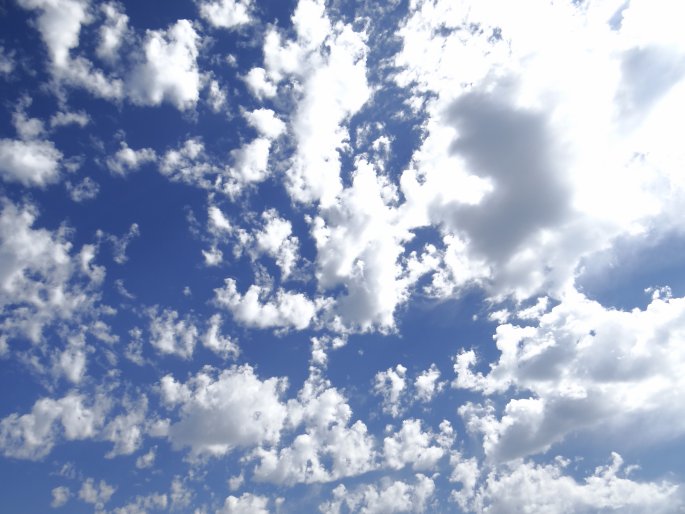 Throughout Kansas, a cumulus field was developing. The coverage was quite widespread, and so we wanted to find the intersection between some boundaries. There had been an outflow boundary from the mesoscale convective system (MCS) in eastern Kansas, and a stationary front near the Kansas and Nebraska border. There was also a shortwave approaching, and we figured that would trigger the storms, as conditions were ripe otherwise.

We stopped at a park in the small town of Stockton, KS, and watched the cumulus towers develop vertically. They launched, tilted and then had the tops sheared off. One of the cells started to have more definition, so we headed north on US-183 towards Phillipsburg, KS, to catch it.

Now would be a great time to explain the concept of subsidence. On the front side of a shortwave, there is a lifting mechanism. On the backside, there is subsidence (falling air). So, as the shortwave approaches, we can have storms start to fire, but once we are on the backside, the air has a sinking tendency. What does this look like? I’m so glad you asked! I will be putting together some of my dash cam photos in the near future and you will be able to watch our cumulus field disappear before your eyes!

By 6:00pm local time, the skies were sunny, with barely a cloud in them. A normal chase team may give up at this point. The daytime heating is about done. To our west, there was a small blip on the visible satellite, and conditions looked good for its development.

We headed west towards Atwood, KS, and sure enough, that little blip turned into a Low Precipitation (LP) supercell. 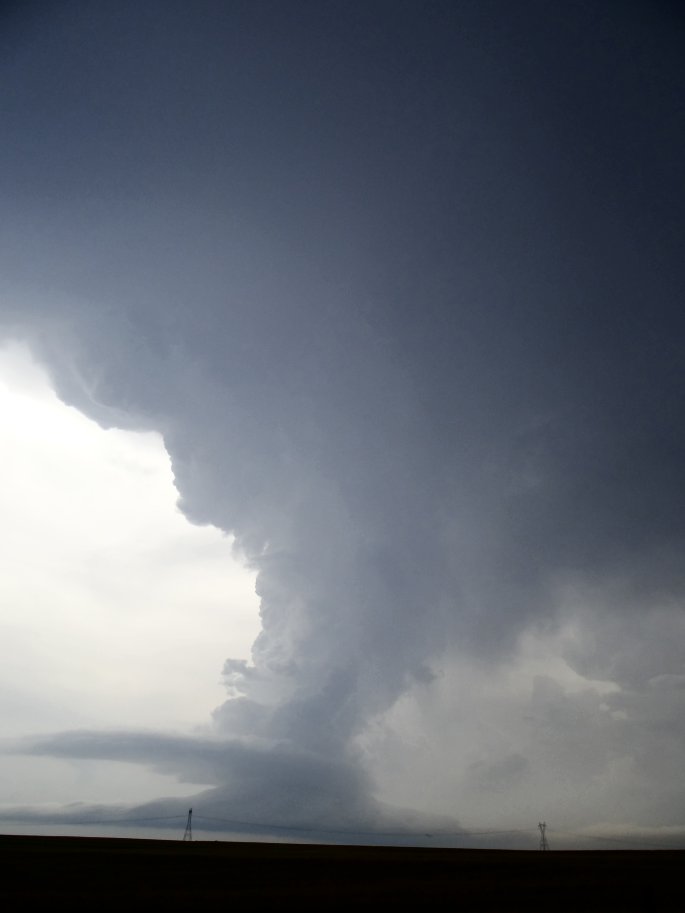 We watched this cell for a few minutes, but other updrafts looked to become storms as well. These other updrafts were not as organized, but they would likely rain. We had started down a dirt road, stopping a few miles south of US-36 to take these photos.

The big problem with dirt roads in Kansas is that the dirt turns to pancake batter when it gets wet. With the storm’s precipitation core to our north, we had no choice but to continue south until we found a paved road.

The entire area was volatile, and all sorts of little updrafts were forming vertically, like this guy here: 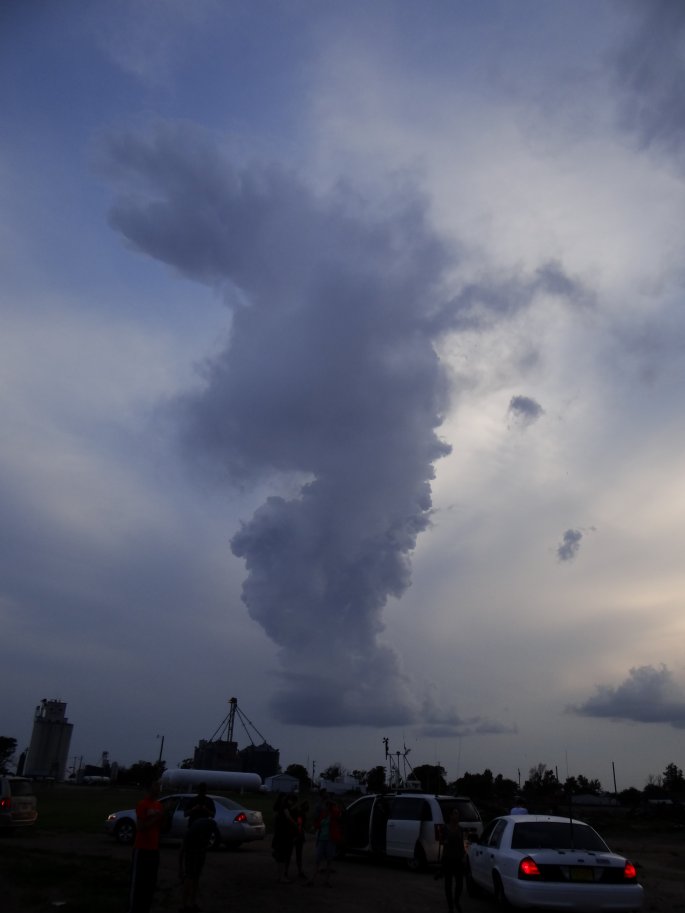 …or all of these cell bases: 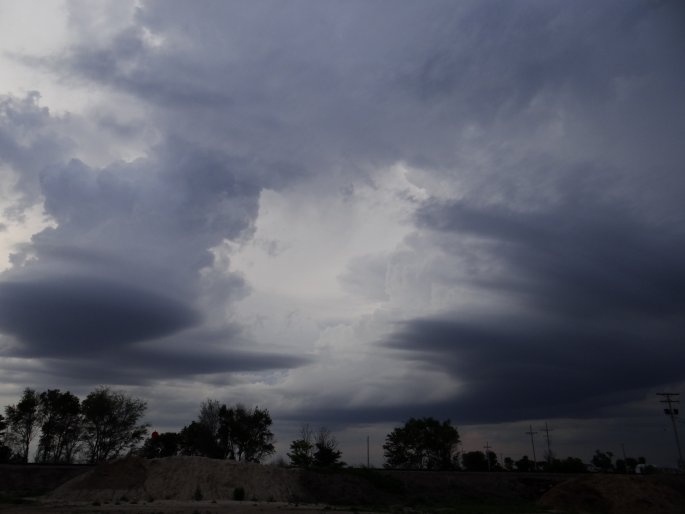 …or this much larger cell to our south: 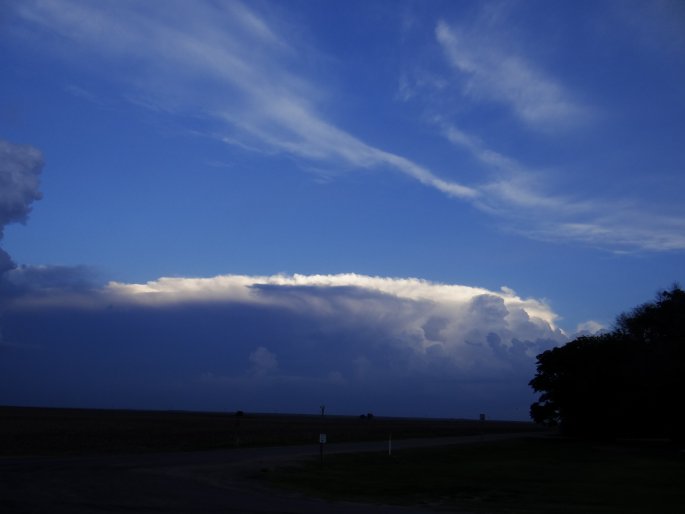 …or this guy that eventually produced a lot of lightning: 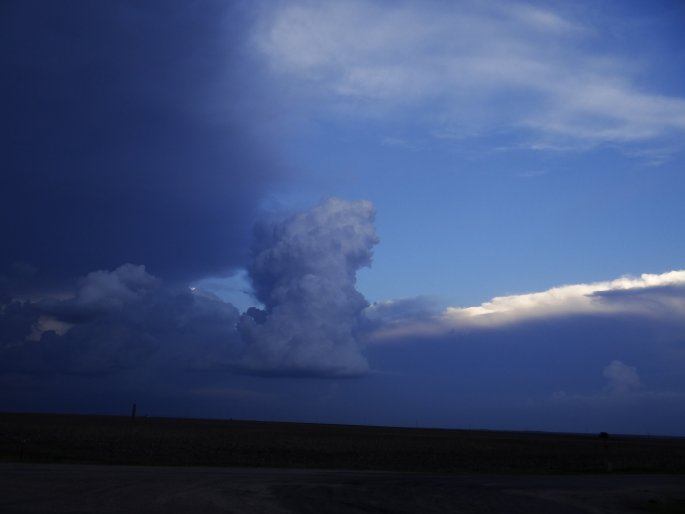 We stopped just south of a railroad track and watched the storms develop. Eventually, a new cell formed, still moisture-starved, but slightly more promising than the LP cell we saw earlier.

The rising cloud tags stuck to the bottom and formed a wall cloud. It was rotating slowly, not nearly as impressive as the Elizabeth, CO, storm’s rotation, but a neat sight to see. 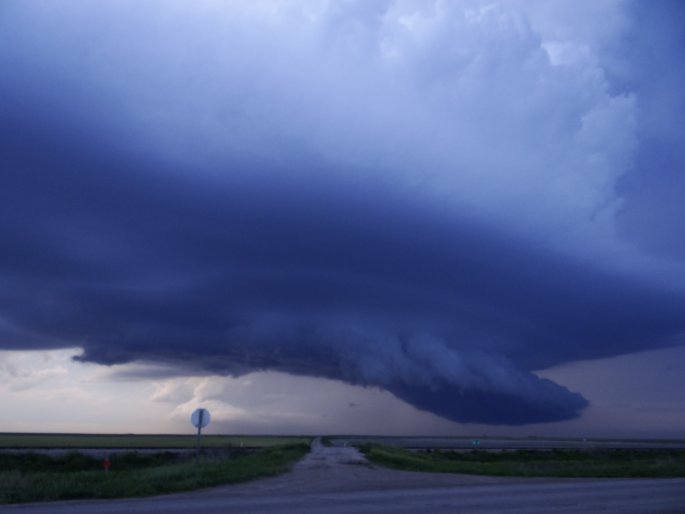 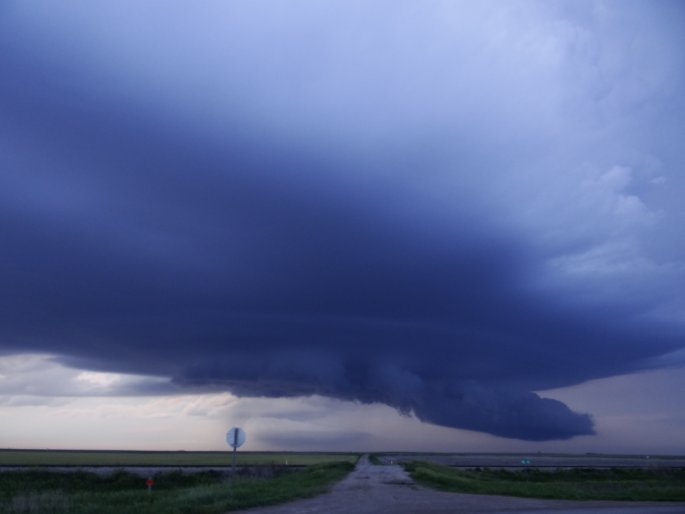 We bailed south and then a little west as more updrafts went up.

Nightfall was approaching, so we found a quiet, dark spot and took lightning photos for several hours. 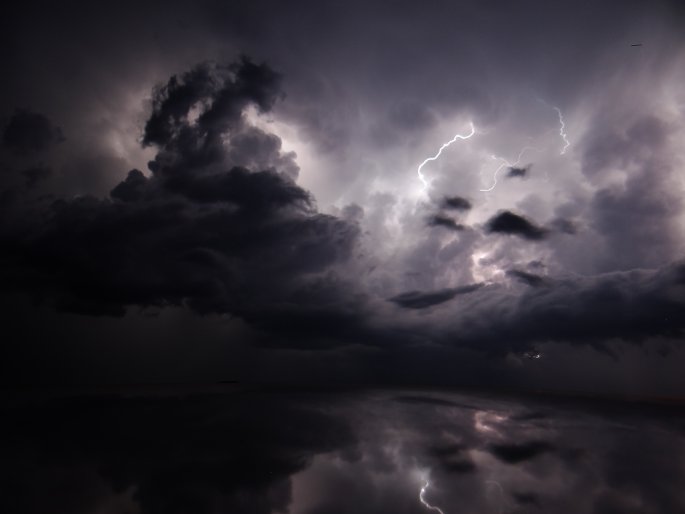 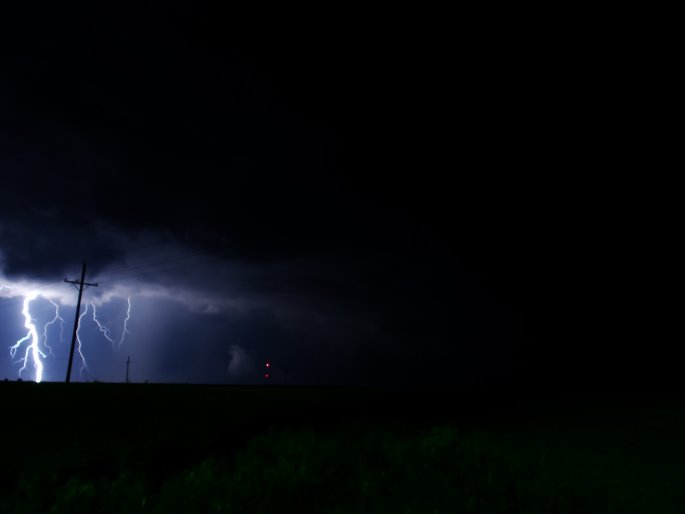 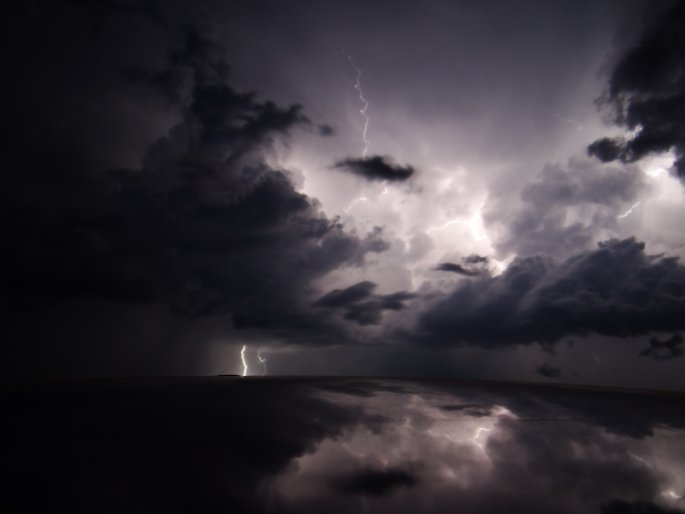 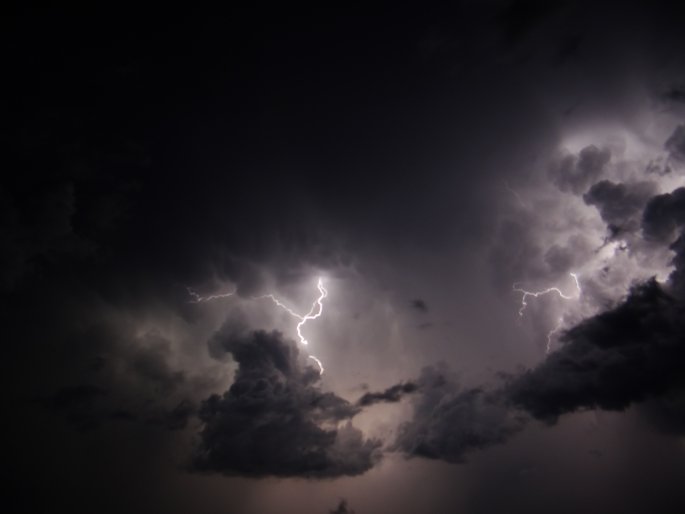 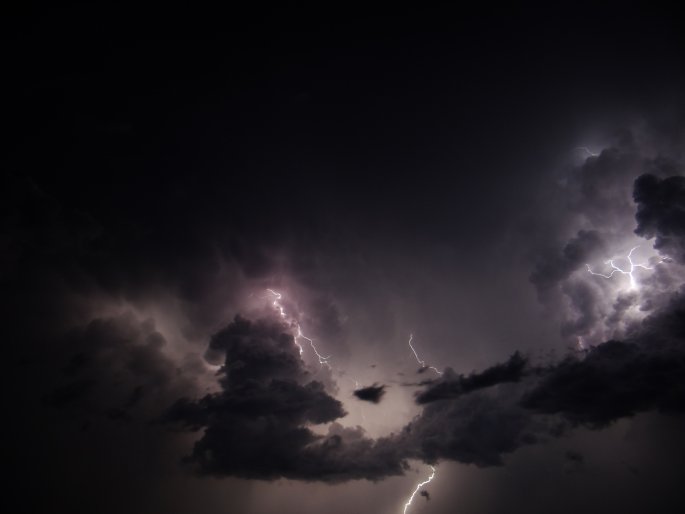 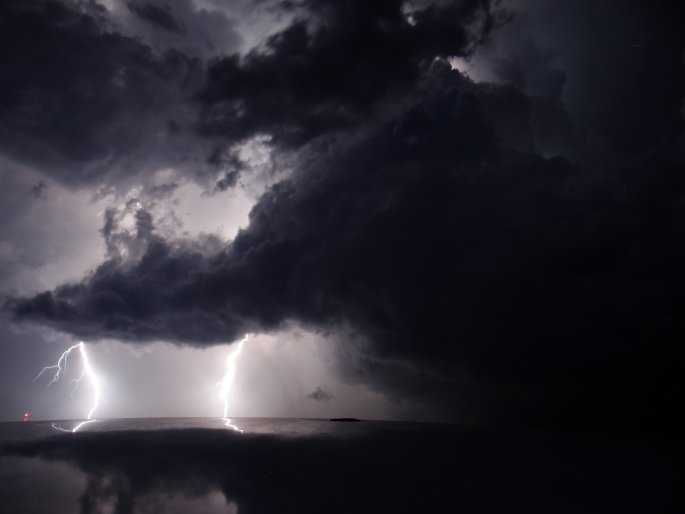 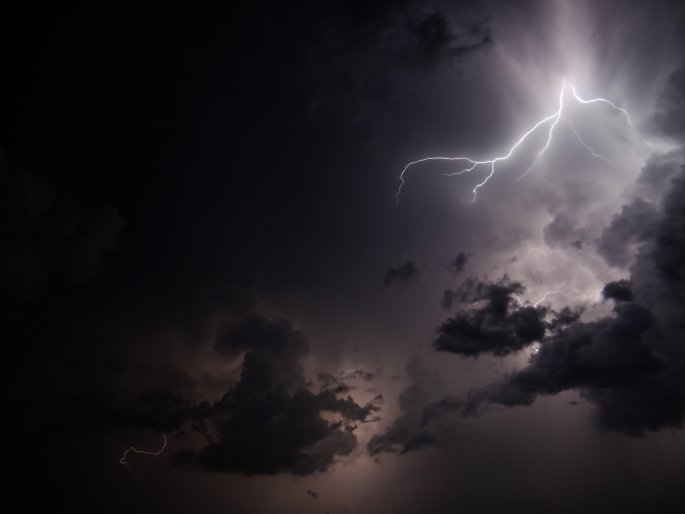 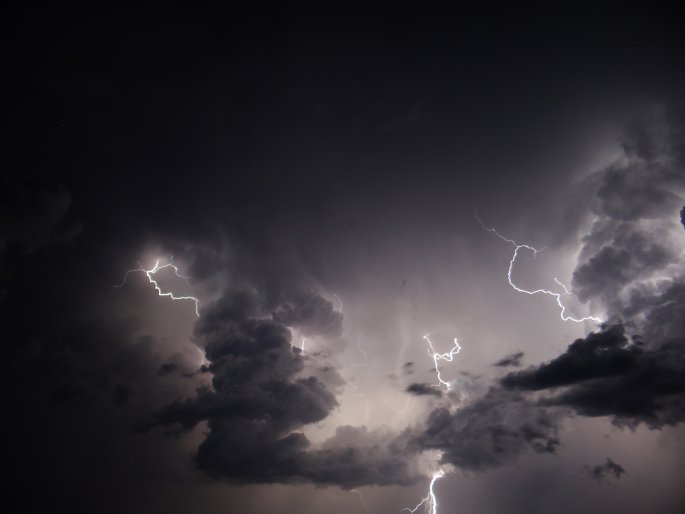 We spent the night in Colby, KS. All in all, what looked like a “busted” day turned out to be great. Now, we’ll figure out what to do for today’s chase.

This blog is about my tales in storm chasing. My name is Seth Price and I am an instrumentation instructor at New Mexico Tech. My amateur radio call sign is N3MRA.
View all posts by highplainschasing →
This entry was posted in Chase Account, Photography and tagged #stormchase, 5% Tornado Threat Ring, Atwood, Kansas, lightning, meteorology, photography, severe, slight risk, storm, storm chase, wall cloud, weather. Bookmark the permalink.