Posted on July 25, 2014 by highplainschasing

I have not done much weather related work today. I spent the day at the ARRL Teacher Institute, working on microcontrollers. I am becoming less shy around them, and perhaps could take on a larger weather station project.

One of the instructors did mention some of the hazards that are often overlooked with weather balloons. Many schools undertake the project of building and launching a weather balloon to demonstrate that the school is doing STEM (science, technology, engineering and mathematics) work. However, most overlook the dangers associated with hydrogen (used to fill the balloons), and the threat to aviation in the area. If done incorrectly, a weather balloon launch can be a dangerous thing; the reward (do the students actually learn the science?) must be worth the risk.

Having said that, real high altitude balloon soundings are a good thing to have. There are only a few NWS offices that launch high altitude balloons, and being able to integrate a few “homemade” data points to confirm model output would be nice. I’ve thought about this for near-storm environments, though I’ve heard each balloon is roughly $1000 a shot, or 1/2 of my entire annual storm chase budget. I don’t think I’ll be launching any balloons any time soon.

Outside of weather balloons, a small storm is fading in the northern high plains. This single cell storm was producing hail, and a Three Body Scatter Spike (TBSS) can be seen on the southwest part of the radar image. 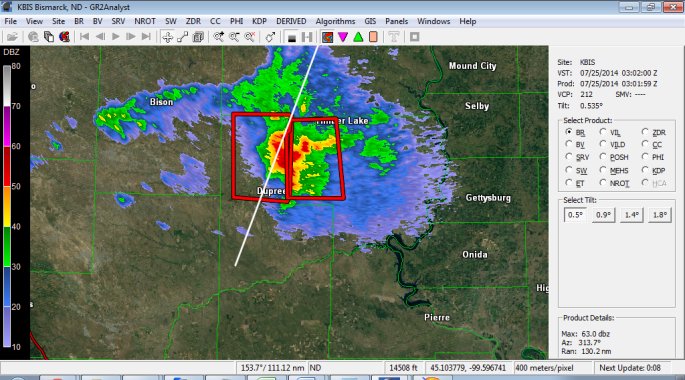 This one is not a great example, but know that it is there.

This blog is about my tales in storm chasing. My name is Seth Price and I am an instrumentation instructor at New Mexico Tech. My amateur radio call sign is N3MRA.
View all posts by highplainschasing →
This entry was posted in Chase Account, Chase Crew, Education, Winter Weather and tagged hail, meteorology, south dakota, storm, TBSS, three body scatter, weather. Bookmark the permalink.