Posted on June 9, 2014 by highplainschasing

I promised more from yesterday’s “potential” chase. It turned into another storm chase day.

The Slight Risk that had been issued yesterday quickly turned into a Tornado Watch for the eastern part of New Mexico. Originally, we targeted Springer, NM and began our trek northward on I-25. All around, cumulus clouds were developing vertically.

This system would likely go linear quickly (and it did), so we had to be on the early initiation of storms in hopes of seeing discrete cells.

There was some upper level energy as a jetstreak approached the area, visible on the 300 mb NAM chart.

I didn’t honestly do much more analysis than this- I figured this might be the last chase day of the year for me, so I took a chance.

We crossed through Las Vegas, NM on I-25 and continued north. Ahead, we could see a strong cell developing. The entire cell is visible in this photo. Notice that there is no backshear on the anvil, but that there is an anvil and that the updraft is tilting forward, meaning there is some shear. 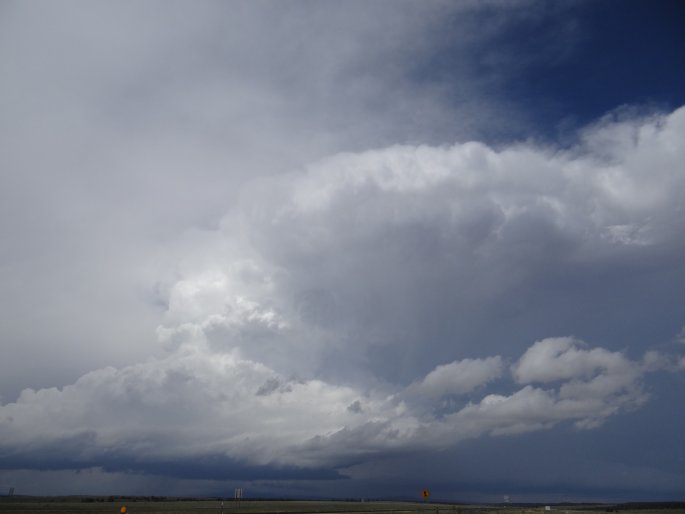 As we approached a little more, we could clearly see the shelf cloud between the inflow and outflow regions. 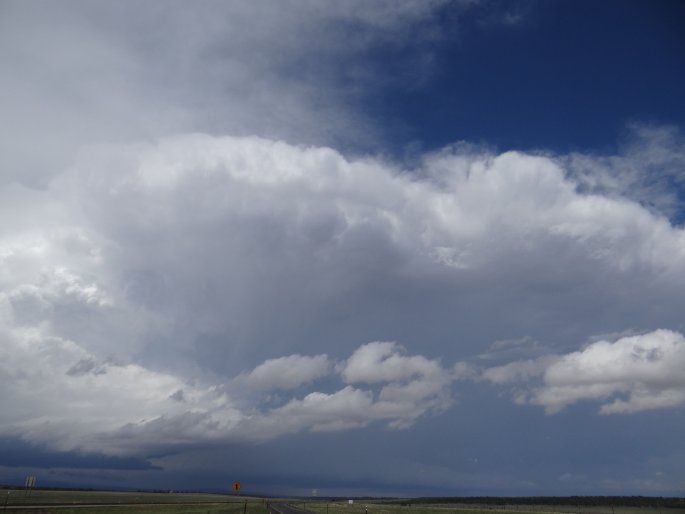 And then, there was a wall cloud. 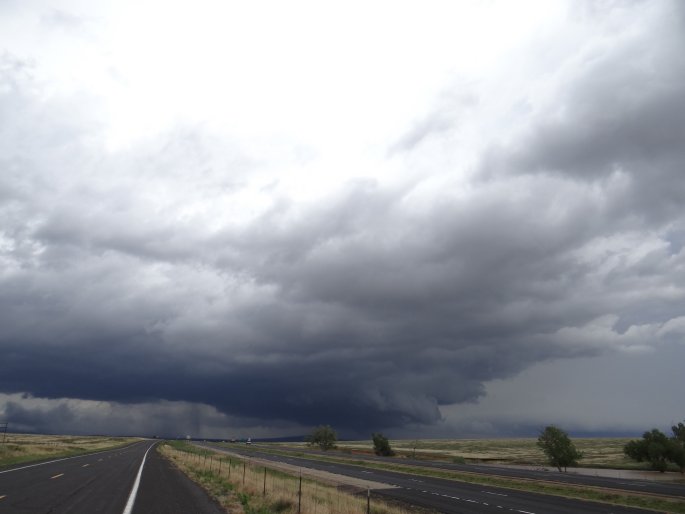 Notice how our cell was spinning, as evidenced by the storm relative velocity radar image: 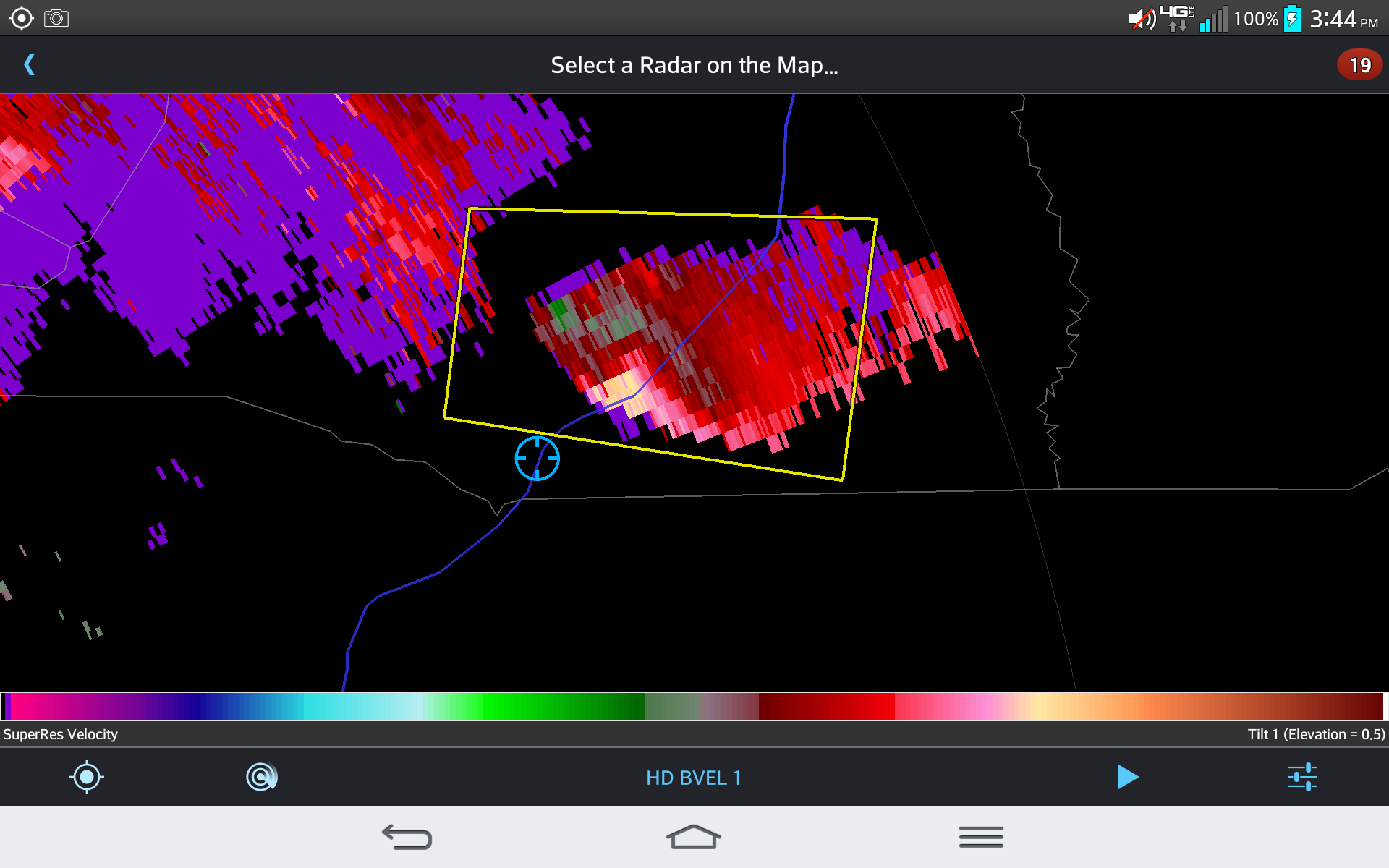 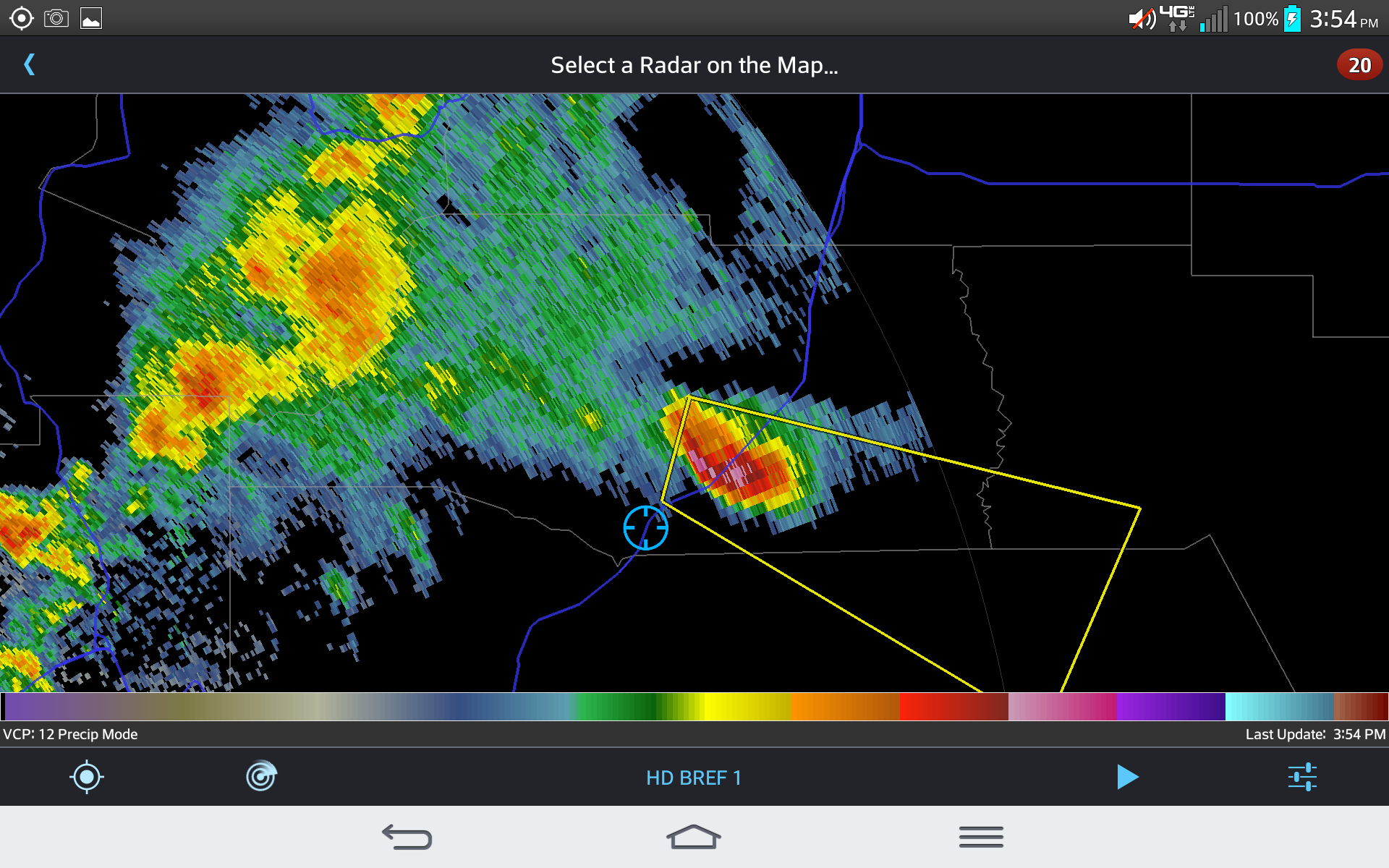 We were watching the storm develop and were worried about the line that was forming to our west.

You won’t believe this part, because there is no photographic evidence. To our west, there was a very long, high based funnel. The funnel extended approximately 2/3 of the way to the ground, and I could not see dust beneath it. It was a long ways away, but it was clearly a funnel. I might have had a chance to take a film camera photo of it- we’ll see when I get my photos back from the developer.

I turned back to the cell to our north. It was beginning to be absorbed by the approaching squall line. The wall cloud was low, but ragged. 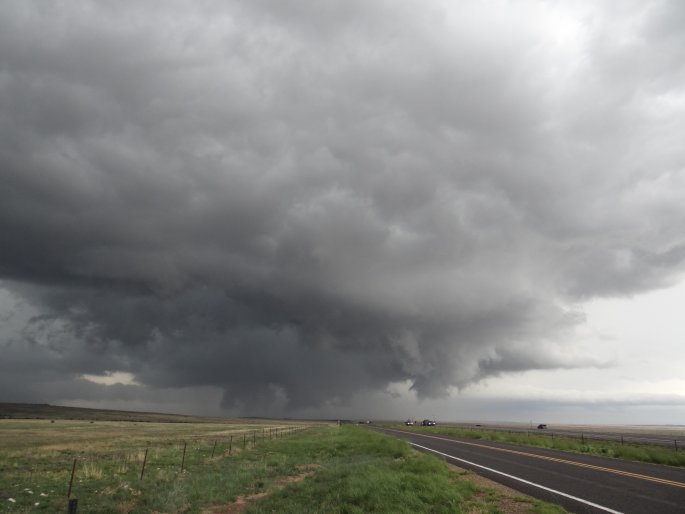 One thing I should note- the air was cold everywhere. I mean, actually cold. “I wish I’d brought a jacket” cold. We turned and headed south on I-25, rather than being caught by this line.

As we approached Las Vegas, we crossed some rain, and then sunshine. We reached the sunshine, only to be pelted by pea sized hail that was on the back end of our storm as it began to absorb into the line. 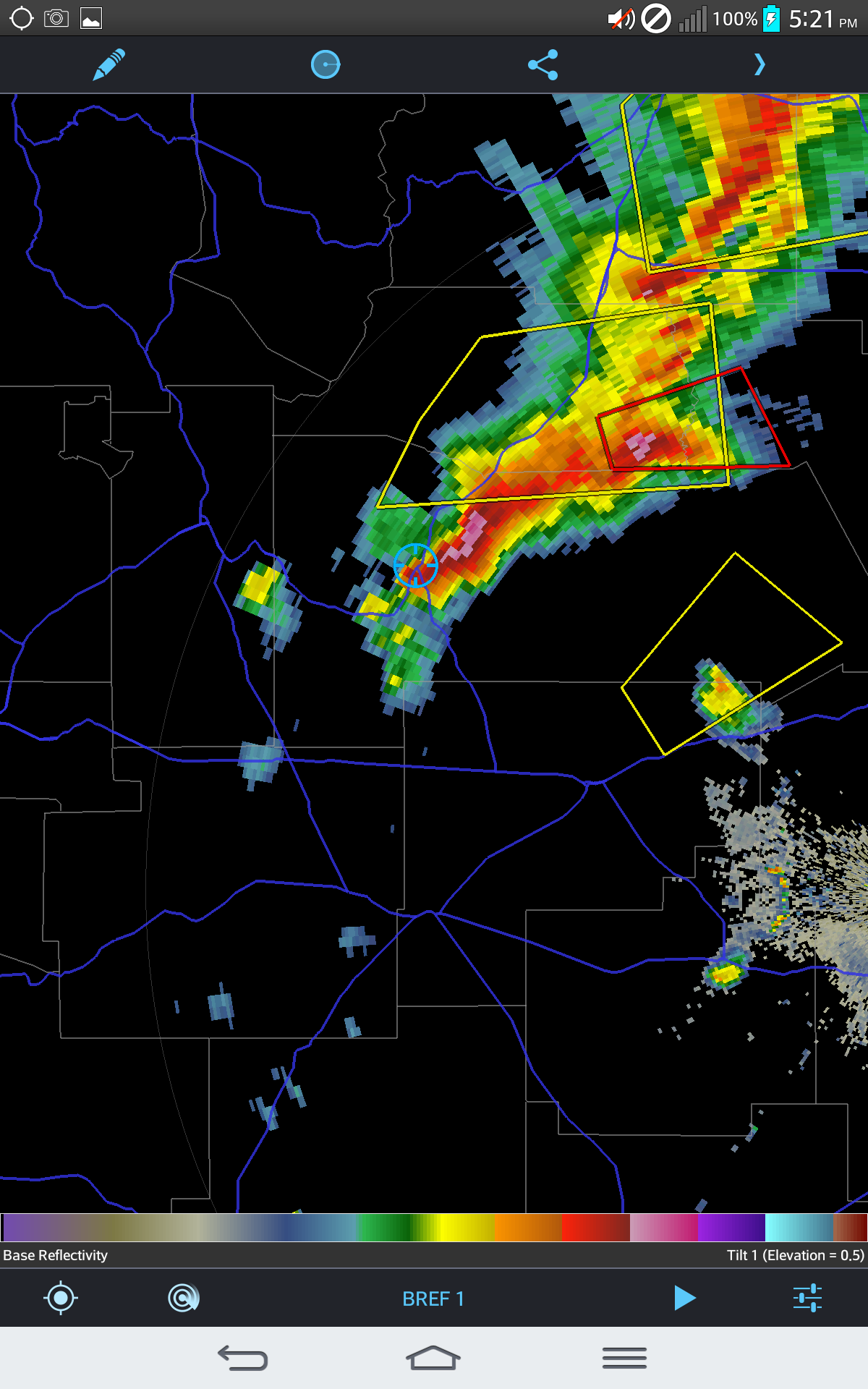 We stopped for a few minutes in Las Vegas, NM. We were originally going to head east on NM-104, but a developing cell to the south may have cut us off- leaving us in the path of the squall line. We decided to head south and then southeast on US-84. 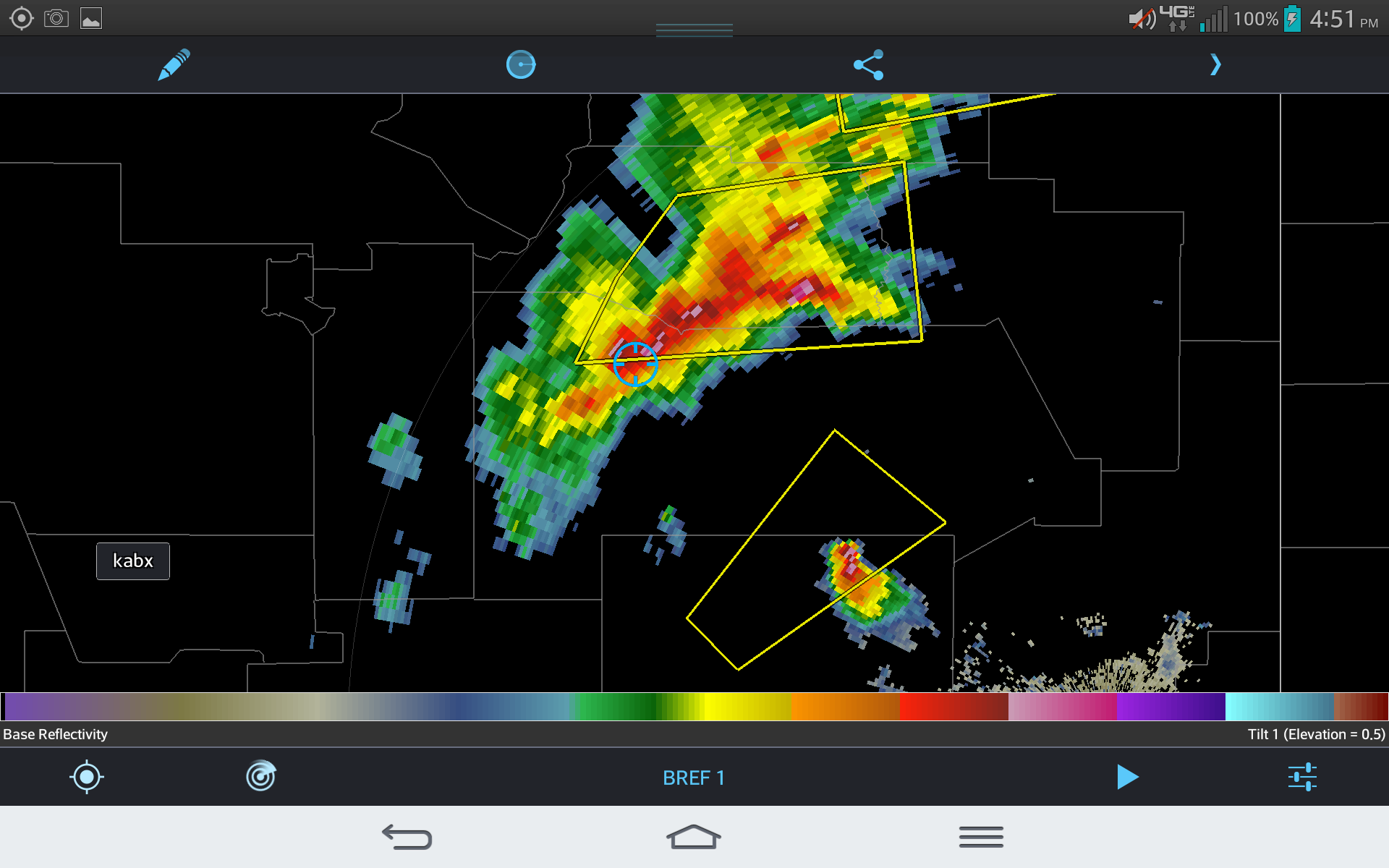 We stopped at the US-84 exit and checked again, just to be sure. We managed to get a photo of the Silver Lining Tours group under the rainbow that was forming behind this squall line. We were well south of the southwesternmost cell, and had not seen any more develop. 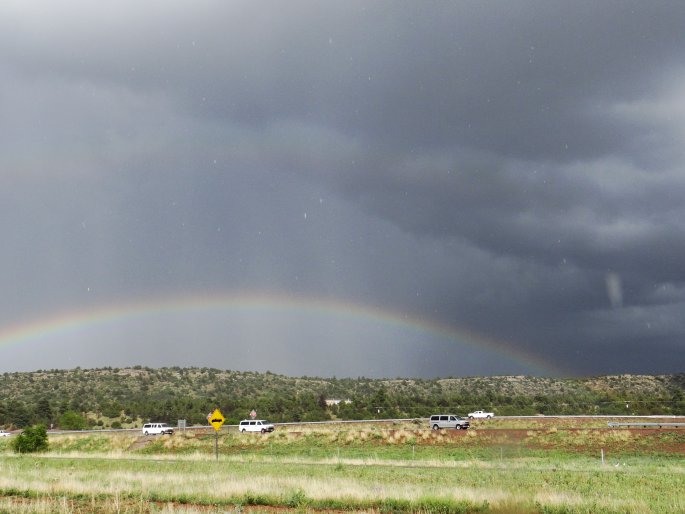 We took US-84 and continued until it met I-40. We gave another glance at our squall line, and decided to head west, back to Rio Rancho. This likely concludes the 2014 Storm Chase! 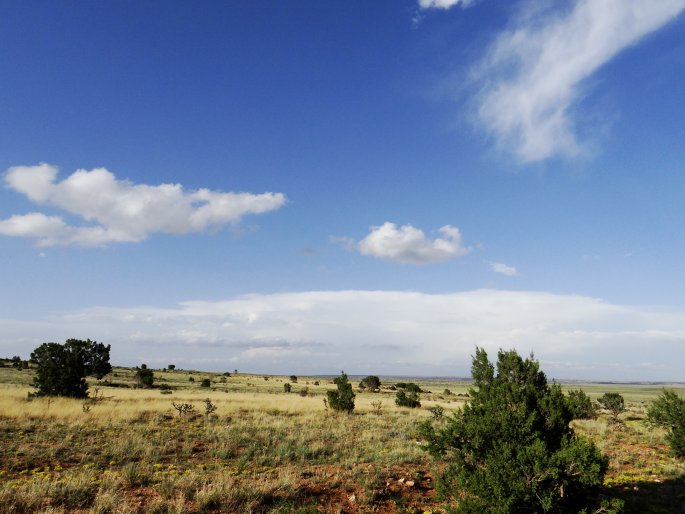 All radar images are from Radar Scope. If you haven’t tried this program, it’s a neat mobile device radar package. I highly recommend it!