Today was not so much a chase day as it was a logistics day. We took the day off from chasing in Lubbock, TX. We cooked more meals, did laundry and met our very first High Plains Tours customer.

Late yesterday evening, there was a line of storms that had formed across eastern New Mexico and was moving into Texas. I could see the lightning from my hotel window, and saw that it was several strokes per second. I left my hotel and drove US-82 west (which goes southwest out of Lubbock) in hopes of taking lightning photos. This storm died out. I then went back to Lubbock and back out the western side on TX-114.

I pulled over in a development and tried to take lightning photos with no real success. I went back onto TX-114 and took a few more- between car headlights.

By the time I was taking these photos, the lightning rate had slowed, and the rain was ahead of the lightning, so I got more flashes than actual visible bolts. Even so, they backlit the shelf cloud of the approaching squall line. 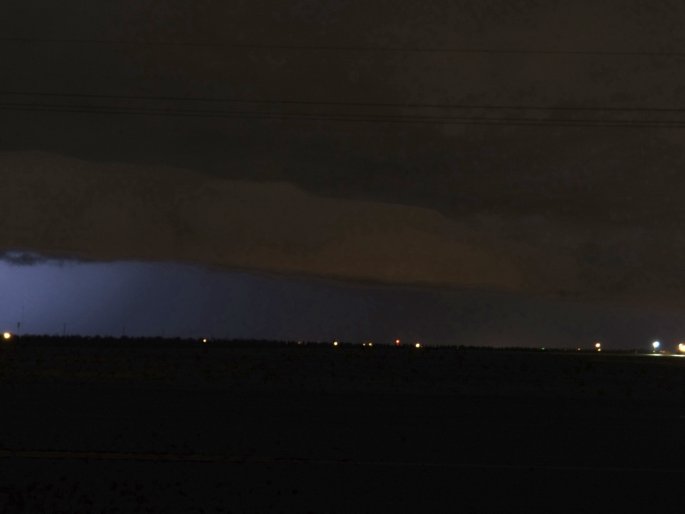 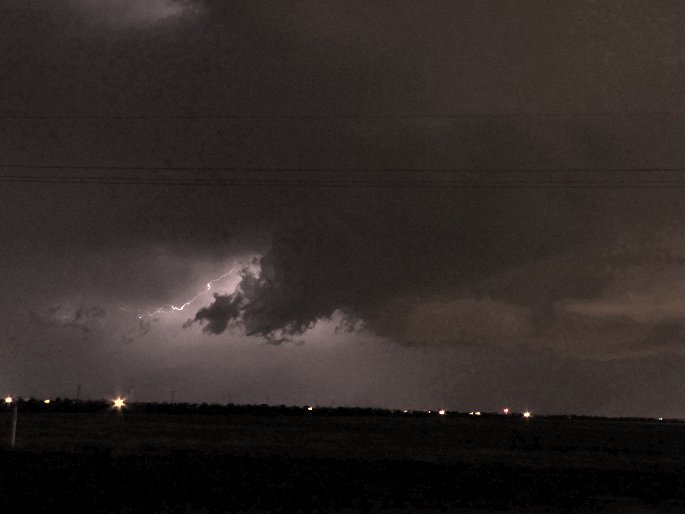 I gave up around 1:15 am and returned to my hotel for a few hours’ rest.

Today, the Storm Prediction Center (SPC) has issued a Slight Risk for a large portion of Texas.

Associated with this Slight Risk is a 5% Tornado Threat Ring:

The SPC issued this risk based on a number of factors, including the upper level (300 mb and 500 mb) dynamics, and interactions with outflow boundaries from last night’s storms.

The visible satellite in the area shows clearing to the south near Odessa, with a few cloud streets near Andrews, TX. There is a lot of cloud cover over the eastern part of the state, with a little morning convection to the northwest of Lubbock.

The 12Z sounding out of Odessa/Midland is the best looking one in the area. The 12Z CAPE is not as high as I’d like to see, but it does demonstrate adequate shear, and given that it will be exposed to daytime heating all day (clear skies), the CAPE will rise higher throughout the day.

Overall, I think I will target Andrews, TX today.