Yesterday, we began in Clovis, NM. The Storm Prediction Center (SPC) had issued a Slight Risk for an area on the NM/TX border to the very south.

Based on the Midland, TX sounding, we targeted somewhere near Midland. There was also an outflow boundary from the overnight convection that was slowly drifting through the Midland/Odessa area, and I wanted to get near it; especially where it interacted with a weak dryline.

We left Clovis on US-70 east, and then turned south at Muleshoe, TX on TX-214. As we crossed into new counties, I attempted to use my Yaesu FT-857D, only to find that the display is dead. It has a loose connection somewhere, and so I have no HF radio for this trip.

Visible satellite imagery was showing cloud streets developing all over the target area. Even in Clovis, we were under a cumulus field. The feature of interest was a wave in the cloud streets extending from the southeast corner of New Mexico into the Midland/Odessa area.

Cells began to develop to our southwest, but the boundaries described were still to our south. We stopped in Andrews, TX for a few minutes, when a cell to our northwest went severe. This photo shows a layer of cirrus clouds around the cell where the strong updraft has interrupted the upper level winds, and caused them to condense around the cell. It give the storm a halo effect. 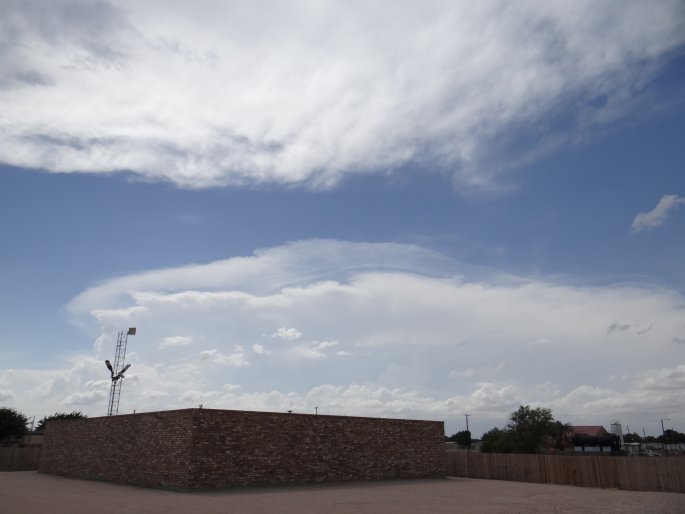 We chased this storm for a few minutes, but saw that it was rapidly weakening. We dropped chasing this storm in favor of the boundary interactions to the south.

We stopped briefly on the outer loop (TX-338) of Odessa, and because daylight was starting to fade, opted to chase a warned cell southwest of Fort Stockton. We went south on US-385, and after McCamey, TX, saw this cell starting to lose features as well. 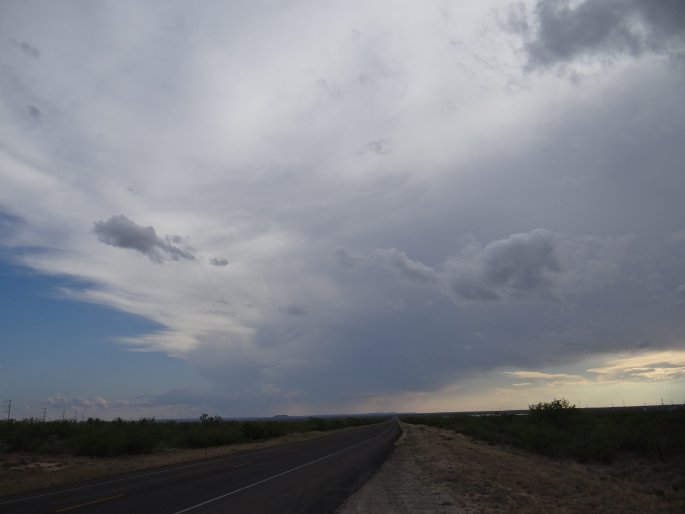 We continued on to Fort Stockton and stayed at a Quality Inn. As the last few minutes of daylight faded, I took one more photo of a cell that tried to form too late in the day, and was now falling apart. 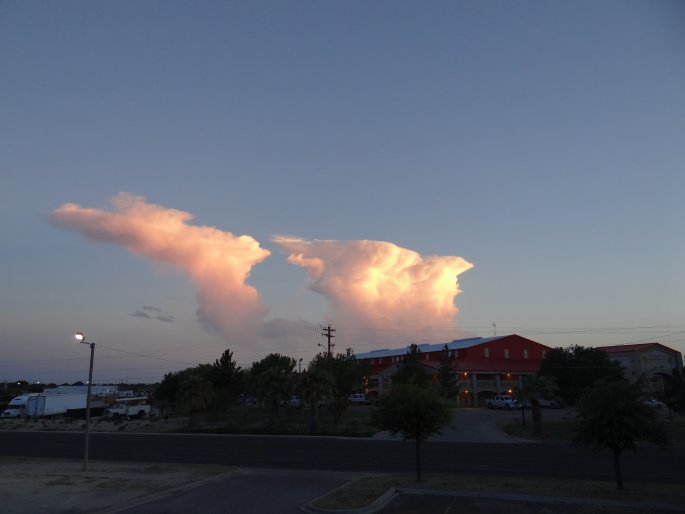 Stay tuned. SPC has already issued a Slight Risk for today, and included with that risk is a 2% Tornado Threat Ring.

This blog is about my tales in storm chasing. My name is Seth Price and I am an instrumentation instructor at New Mexico Tech. My amateur radio call sign is N3MRA.
View all posts by highplainschasing →
This entry was posted in Chase Account, Ham Radio and tagged meteorology, NM, severe weather, Skywarn, slight risk, storm, storm chase, supercell, TX, weather, weather forecast, weather photography, weather prediction. Bookmark the permalink.