I did not get a chance to post my predictions yesterday, as I was too busy pursuing them. SPC must have had a rough day yesterday, as everything kept changing on their website.

We started out the morning with a moderate risk over parts of OK and KS. By late morning, the moderate risk was gone, due to the heavy cloud cover and ongoing morning convection. There was a thin 10% tornado risk in the area that had the moderate risk. Amarillo was drizzly and cold. Below is a radar capture of my morning in Amarillo. Note the giant convective system to the east: 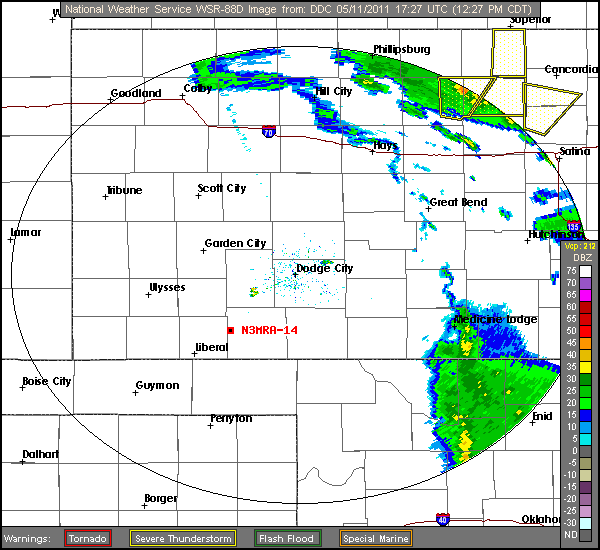 By midday, the 10% tornado ring had grown to include the center of KS. The NWS in Dodge City, KS said that storms were expected to initiate along a line from Scott City, KS to Dodge City, KS to Englewood, KS and that tornadoes were most likely from Wakeeney, KS to Hays, KS to Lacrosse, KS.

I started out the morning in Amarillo, TX and figured I had better get as far east as I could before the cumulus clouds started forming. I headed east out of Amarillo and figured I should check SPC. From there, I saw that they dropped the moderate risk, and shifted the 10% tornado ring slightly, so I headed north to Liberal, KS. I was unable to stop in Liberal, and didn’t stop again until Plains, KS or so. Because of the announcement on the NWS radio, and the approaching dryline from the southwest, I initially targeted the southern end of their line, Englewood, KS. At the junction between US 160 and US 283 just north of Englewood, I could see some altocumulus clouds to my north. To the east and to the south- more cirrus shield. I headed north on US-283 until Ness City, KS. I refueled in Ness City and drove around town a few times trying to decide what to do. NWS was still repeating the statement about storm initiation along that same line- but all I saw was cirrus shield. To my west was clear skies, and a new mesoscale discussion from the SPC. The mesoscale discussion said that a severe thunderstorm watch would likely be needed in southwest KS, near where I started the morning. After a few minutes, I could see the faint outline of a few cumulus clouds starting to form to my west, so I headed west out of Scott City to Dighton, KS on KS-96. 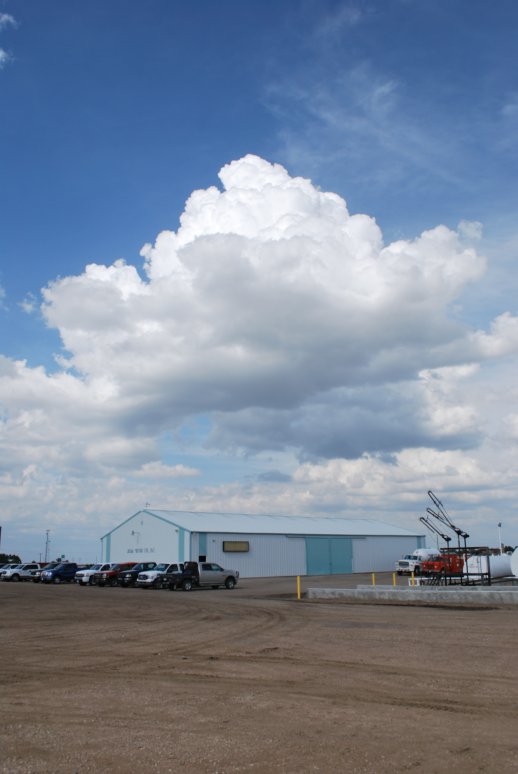 I have attached an animated .gif of my drive along KS-96. In this half-hour, you can see that the sky went from almost no clouds to a full cumulus field.

In Dighton, I was not impressed with what I saw to the south (nothing), east was still cirrus shield, and there were developing cumulus clouds north and west. I decided to head up to I-70- this way I had a good west/east route, just in case storms did somehow fire back in Wakeeney. So far, most of the cumulus clouds were flat and not terribly exciting.

In Gove City, KS, I could see that I still needed to get north and west, but the cumulus clouds were beginning to grow vertically. I headed westbound on I-70, stopping in Oakley for a quick meal. Below is an animated .gif of my trek westbound on I-70 at 17:04-17:07cdt. Notice that upper level clouds are moving in a different direction than the lower level clouds:

When I emerged with my dinner, I could see that the cumulus clouds were now more like cumulus congestus, and were heavily leaning west to east. Adequate shear. From Oakley, I continued on US-40 westbound for a few miles. I started seeing other chasers when I got on I-70, but now there are more and more of them stopped on the shoulders.

I paused for quite some time at the intersection of KS-25 and US-40. There were several blips beginning to appear on radar, and the storms were all to my north. I headed north on KS-25 and continued north past I-70. The satellite image shows how unimpressive this storm was: 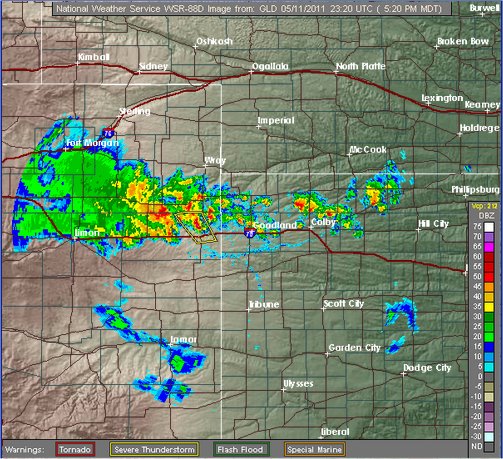 Along KS-25, I stopped numerous times to watch the storm. At one point, I jogged too far north and ended up getting hailed on (pea-sized hail). Several times, the storm tried to get organized, but just couldn’t pull things together: 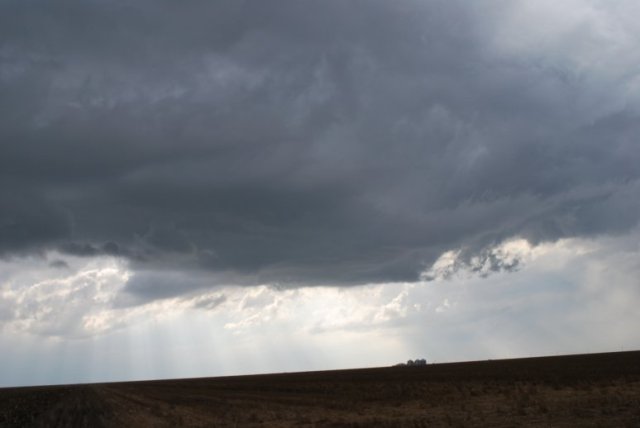 There were several interesting features to this storm, including this short animation (looking north on KS-25):

This was not a tornado, but it was neat to see. This storm system just couldn’t produce. It churned a lot, but no organized rotation.

I continued north on KS-25, stopping just north of Atwood, KS. The warning for this storm had expired, and a new warning was issued for a storm near Oberlin, 30 miles away. I started heading east on US-36, but with daylight running out, and Oberlin being farther from the direction of home, I gave up pursuit after a few minutes. I took US-36 to KS-27 towards Goodland, KS.

I looked for hotels in Goodland and learned that Motel 6 doesn’t have air conditioning and America’s Best Value Inn is neither best or a value. I ended up spending the night in the Super 8 by I-70. Tomorrow, I’ll head back to NM.

Below is a Google map of today’s journey:

This blog is about my tales in storm chasing. My name is Seth Price and I am an instrumentation instructor at New Mexico Tech. My amateur radio call sign is N3MRA.
View all posts by highplainschasing →
This entry was posted in Chase Account and tagged colby ks, slight risk. Bookmark the permalink.